Astronomers and philosophers both like big pictures, but they often have different measures in mind. Astronomers "go big" in space and time -- philosophers do so in levels of abstraction from the mundane matters of everyday life. But when it comes to the question of the future of humanity, these dimensions coincide to a considerable extent.

We humans tend to think of ourselves as special, the culmination of the evolutionary tree. But that hardly seems credible to an astronomer, aware that although our Sun formed 4.5 billion years ago, it is barely in middle age. Any creatures witnessing the Sun's demise six billion years hence won't be human -- they'll be as different from us as we are from insects. Post-human evolution -- here on Earth and far beyond -- could be as prolonged as the Darwinian evolution that's led to us, and even more wonderful. And of course, this evolution is even faster now - it's happening on a technological timescale, driven by advances in genetics and in artificial intelligence, and thus far faster than natural selection.

In particular, few who seriously consider the issue would doubt that machines will eventually surpass more and more of our distinctively human capabilities -- or enhance them via cyborg technology. Disagreements are basically about the timescale -- the rate of travel, not the direction of travel. The cautious among us envisage timescales of centuries rather than decades for these transformations. Be that as it may, the timescales for technological advance are tiny compared to the timescales of the Darwinian selection that led to humanity's emergence -- and they are less than a millionth of the vast expanses of time lying ahead. So the outcomes of future technological evolution may surpass humans, intellectually speaking, by as much as we surpass a bug.

Post-human evolution -- here on Earth and far beyond -- could be as prolonged as the Darwinian evolution that's led to us, and even more wonderful.

Is this a cause for pessimism? Should we regret our eventual obsolescence or try to prevent it -- to rage, rage against the dying of the mites, as it were? The optimistic view is we humans shouldn't feel too sad or too humbled. We are surely not the terminal branch of an evolutionary tree but we could be of special cosmic significance for jump-starting the transition to silicon-based (and potentially immortal) entities, spreading their influence far beyond the Earth and far transcending our limitations.

If all goes well, the far future will bear traces of humanity, just as our own age retains influences of ancient civilizations (and our bodies and minds retain traces of the struggles of our pre-human ancestors). Humans and human thoughts might be a transient precursor to the deeper cogitations of another culture -- one dominated by machines, extending deep into the future and spreading far beyond Earth.

If there's a shadow over this optimistic vision, it is the possibility that we might instead be heading for a dead-end, long before this future opens up. Astronomers are well aware of the possibility of sudden cosmic catastrophes, such as asteroid impacts, that are blind to the wellbeing of a planetary biosphere. More alarmingly still, there's the possibility that the biosphere might engineer its own destruction by producing creatures -- us -- who are too smart for our own good. Some unforeseen consequence of one of our powerful new technologies -- synthetic biology, some single-minded form of artificial intelligence or something else -- might manage to wipe us out, long before any laudable silicon descendant takes intelligence to the stars.

We can't do much, yet, about cosmic catastrophes, but we may be able to steer ourselves away from some of our homegrown existential risks. It certainly makes sense to try. As philosophers such as Derek Parfit have pointed out, absolute extinction is much worse even than a calamity that wipes out, say, 95 percent of humanity, because it prevents the existence of all the future generations, as well as destroying the present generation. A growing group of organizations -- e.g., the Future of Humanity Institute in Oxford, the Centre for the Study of Existential Risk in Cambridge and the Future of Life Institute at MIT -- is trying to tackle some of these challenges.

At this point, the pessimist raises an objection. If we are going to "mutate" so radically in the long term, then we humans won't survive anyway. How is that different from quicker and messier paths to extinction? Either way, to misquote Keynes a little: in the long run, we humans are all gone. So why all the fuss?

The optimist has two answers to this. The rosier view is that there are paths to a post-human future in which each generation is able to feel, yes, these are our children, our descendants, our legacy. Children grow up, and make their own decisions, some of which might shock even their parents -- let alone their more distant ancestors. That's life, and it is better in most ways than the alternatives. A fight against extinction needn't be a fight for stasis.

We humans tend to think of ourselves as special, the culmination of the evolutionary tree. But that hardly seems credible to an astronomer, aware that although our Sun formed 4.5 billion years ago, it is barely in middle age.

The less rosy view is that even this may be too much to hope for. All the same, the not-quite-an-optimist says, there's a vast gulf between a future rich with strange, alien and morphing descendants and a future in which the distinctive strand of intelligence that arose in our corner of the galaxy has fallen silent. Our sense of what we value now tells us that that silent future is the one we should work to avoid.

There may be billions of Earth-like planets in our galaxy alone, and hundreds of billions of other galaxies, similarly rich with the kind of environments we know to be favorable for our sort of life. Unless we're a lot more special than at present we have any reason to think -- it seems likely that other technological civilizations have reached this point and perhaps had these kind of thoughts.

If these civilizations differ in what happens next, it may be because they differ in what they do with the realization that -- far more than ever before and thanks to the extraordinary power of their new technologies -- their future is in their own hands (or appendages of some other kind, perhaps). It remains to be seen what we humans will manage to do with this rather daunting responsibility. Watch this space, as an astronomer might say!

This was published in partnership with the Berggruen Philosophy and Culture Center and is part of the WorldPost Series on Exponential Technology.

Huw Price
Professor of Philosophy and Fellow of Trinity College, University of Cambridge

A Post-Human World: Should We Rage, Rage Against the Dying of the Mites?
59 Incredible Space Photos 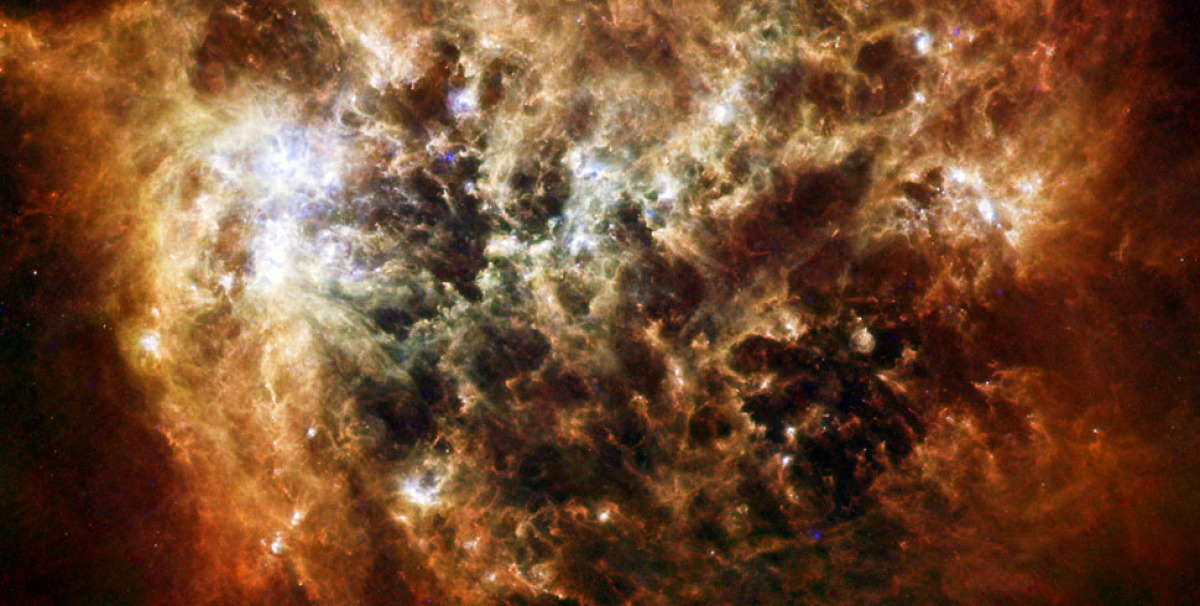 1 / 59
Dusty Space Cloud
This image shows the Large Magellanic Cloud galaxy in infrared light as seen by the Herschel Space Observatory, a European Space Agency-led mission with important NASA contributions, and NASA's Spitzer Space Telescope. In the instruments' combined data, this nearby dwarf galaxy looks like a fiery, circular explosion. Rather than fire, however, those ribbons are actually giant ripples of dust spanning tens or hundreds of light-years. Significant fields of star formation are noticeable in the center, just left of center and at right. The brightest center-left region is called 30 Doradus, or the Tarantula Nebula, for its appearance in visible light.
NASA