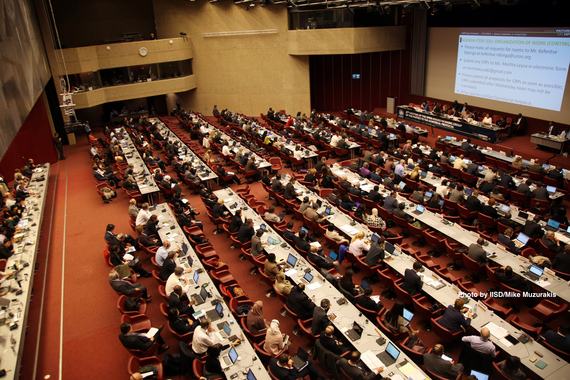 10 April 2016, Geneva - In the first test of post-Paris climate mitigation, Parties to the Montreal Protocol made significant progress last week to eliminate warming from super greenhouse gases known as hydrofluorocarbons, or HFCs, used primarily as refrigerants in air conditioners and other equipment. HFCs are one of the six main greenhouse gases.

This follows agreement by Montreal Protocol Parties last year in Dubai, just before the Paris climate agreement, to resolve a list of issues early this year while working towards an amendment to phase out HFCs with high global warming potential in 2016. The Montreal Protocol is the world's only treaty with universal membership. It is widely considered the world's most effective environmental treaty, phasing out Freon and other fluorinated gases to put the stratospheric ozone layer on track to recover by mid-century, while also providing more climate mitigation than any other agreement--the equivalent of more than 135 billion tons of carbon dioxide.

In Geneva last week the Parties reached tentative agreement on a four-year, potentially renewable exemption for Gulf States and other countries with high-ambient temperature in three sectors. This is to ensure availability of HFC substitutes that cool as efficiently as HFCs. Efficiency is critical, as up to 90% of climate impacts come from the fossil fuel used to provide electricity for air conditioners and other appliances. Saudi Arabia, for example, currently uses up to 70% of its peak electricity for air conditioning, India up to 50%. The Parties are considering how to promote efficiency gains for air conditioners and other appliances, which can avoid up to 100 billion tons of carbon dioxide by 2050, roughly the same as the mitigation from reducing HFCs.

Building on language from the 54 countries of the Africa Group, the Parties also reached tentative agreement on text to ensure that the Montreal Protocol's dedicated funding mechanism covers appropriate incremental costs for converting to climate friendly alternatives, and to support training for service technicians. (The agreed Geneva text is subject to final agreement on the other aspects of the proposed phase-out of the HFCs with high global warming potential, including when the phase-out will begin and how fast it will go.)

The Parties directed the treaty secretariat to prepare a consolidated negotiating text, based on the four pending proposals to control HFCs, as submitted by island states, the first to propose the strategy, North American Parties, the European Union, and India.

The Parties made progress on other issues as well, but in the end the clock ran out, the interpreters went home at the stroke of midnight, and discussions were suspended a little after midnight, to resume two days before the next scheduled negotiating session in Vienna July 18-21.

By all accounts, the Geneva meeting was the most constructive negotiations to date on the HFC amendment and sets the stage for victory in 2016.

Following the success in Paris last December, Parties to the UN climate agreement are now turning to the Montreal Protocol for fast near-term mitigation in the pre-2020 period, as described in a recent editorial by Christiana Figueres, head of the UNFCCC secretariat, and Achim Steiner, head of the UN Environment Program.

The HFC amendment is a priority of President Obama, and further efforts to ensure success this year are expected in several other venues, including in New York 22 April when more than 130 countries gather to sign the Paris Agreement.

IGSD's Primer on HFCs is here.

IGSD's Press Alert on the Geneva meeting is here.