Nicolas Berggruen and Nathan Gardels are authors of "Intelligent Governance for the 21st Century: A Middle Way Between West and East."

The recent Supreme Court ruling that scandalously enshrines nearly limitless campaign contributions as "free speech" has taken the dysfunction of American politics to a whole new level. Like a steroid injection, political cash will bulk up the emerging plutocracy at a time when inequality is already greater than at any moment in modern American history since the 1920s.

Now legally for sale to the highest bidder, multi-party representative democracy may well be compromised beyond repair. When elected officials increasingly represent their contributors instead of constituents, voting becomes a form of disenfranchisement disguised as consent of the governed.

The more things get out of hand, the less radical the alternatives appear. To restore the rule of the many over money, we need to go way beyond the same old campaign financing debate and start thinking about reforming our system of democratic governance itself. It's time to open up the political imagination and think outside the conventional ballot box.

There are other ways democracy can be organized than through choosing distant representatives from mass parties in periodic elections whose outcomes are largely determined by the campaign funding of special interests.

To start with, mass parties that field partisan candidates who compete to represent millions of people presumed to have the same interests are, after all, relics of the early industrial age of mass production.

In the 21st century, society has grown more plural and diverse with proliferating niches and identities beyond the polar silos of the two party system. Mass constituencies have given way to a cacophony of voices and multitudes of contending interests powered by social networking technologies that diminish the role of standardized intermediaries.

In this new "de-massified" world, electoral majorities or singular "public opinion" -- like the defunct notion of the general newspaper reader -- have proven to be phantoms. Political alliances in such a society are transitory, changing with the issue at hand. Stable majorities have been replaced by coalitions of the willing in a shifting kaleidoscope that comes into focus at one turn, dissolves at another and then reassembles in a different combination at another turn.

Think gay Catholics against abortion but for gun control or liberal suburban parents against teacher's unions, or anti-immigrant environmentalists.

As the futurist Alvin Toffler once put it, drawing a comparison from the shift in modern manufacturing, mass party representative democracy is akin to the "batch processing" of the one-size-fits-all industrial era. More suited to our information age are "continuous flow" and "just in time" processes that accommodate ever shifting consumer tastes and preferences through robust feedback loops that link directly to the customer or cohort.

In politics, the equivalent is post-party direct democracy.

Just as ordinary citizens are poised and equipped to meaningfully participate in shaping the rules that govern their lives, batch-processed partisan representatives are being locked up by the plutocrats. A total disconnect is taking hold.

Post-party direct democracy, however, has its own paradox: The more diverse and participatory our highly differentiated body politic, the greater the need for a new kind of mediation by non-partisan or depoliticized practices and institutions that can sort out the trade offs among diverse and contending interests while providing and managing those pubic goods that remain common -- safety and security; access to health care; education, communication, transportation and other infrastructure; a stable financial system and a clean environment.

Institutions that "enlarge the public view" with the long-term and common good in mind are necessary, as James Madison understood, to counterbalance the short-term horizons and immediate self-interests of the various constituencies expressed through direct democracy.

If distantly elected representatives no longer fulfill this mediating function because mass constituencies have dissipated and candidates are in the pockets of the special interests, post-party direct democracy must devise its own counterbalancing institutions and practices.

As a completely conceptual exercise, if we were to step back from the fray and imagine how post-party democracy would be designed institutionally, what might it look like? What follows is by no means some progammatic prescription, but merely an exploration to engage debate and get beyond stale formulas.

THE PILLARS OF POST-PARTY DEMOCRACY

In our exercise of the political imagination, there would be two central pillars in a post-party democracy:

A stepped, pyramid structure of representation for the lower house of the legislature that harkens back to Thomas Jefferson's vision of human scale "district republics." Such a system would eliminate the need for large sums of cash to campaign among large constituencies.

A non-elected, non-partisan "second chamber" or upper house of the legislature. This body would actively solicit public feedback through deliberative polling and process that feedback to formulate policies for voter consent through the direct democracy of ballot initiatives.

In order to garner attention and support in large electoral districts with millions of constituents -- or at a national scale with tens of millions -- candidates must raise huge sums of money to pay for media buys, pollsters and campaign strategists.

If electoral districts were downsized to a human scale of large neighborhoods, as Thomas Jefferson envisioned in his idea of "district republics," this imperative would be eliminated and candidates could go back to people-to-people campaigning. 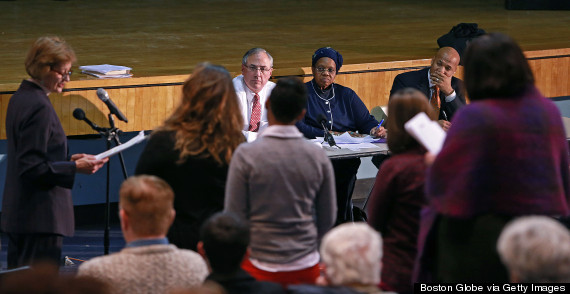 The district republics would deal with issues in their own realm of life and competence, choosing delegates to elect the succeeding level of representatives with broader responsibilities and a wider scope of competence.

If we use California as an example, the present arrangement of 40 members of the Senate and the 80 members of the Assembly could be combined into one non-partisan chamber with 120 representatives. By removing representational duplication in two houses, the size of districts would be reduced to 300,000 from about 1 million each. Each district of 300,000 could be divided into six neighborhood districts of 50,000 each.

The 120 state level representatives would then nominate two contending candidates for governor from the legislature to be voted on by the entire state electorate. By law, each candidate would be given equal media time as a public good for their state-level campaign, thus reducing the need to raise vast campaign sums to make themselves and their proposals known to a very large public.

By reducing the number of electors at each level, the need for campaign financing to reach large constituencies would diminish almost completely. Above all, this new civic software would close the distance between the representative and the represented while involving individual citizens and diverse constituencies more meaningfully in elections where their vote really matters.

Continuing the California example, the eliminated Senate could be replaced by a non-partisan Council of qualified experts combined with citizen representatives that could serve as the "second chamber," or upper house of the legislature. This Council of 15 or so members would actively solicit citizen concerns and feedback on all issues by employing the latest advances in social science sampling and deliberative polling techniques along with new crowdsourcing and social networking technology.

(Deliberative polling draws on a scientific sampling of citizens indicative of the public at large. It then brings in experts to provide information and advice on the issues under discussion so those being polled become fully knowledgable in their opinions.)

On the basis of this scientifically solicited and processed public feedback, the Council would formulate policy proposals that would be put to a vote of the entire electorate through a ballot initiative.

In this way, public concerns could be aired and addressed in a way insulated from the special interest pressures and campaign imperatives of electoral politics. Yet, voter consent would still be required for any policy proposal to be implemented into law.

To ensure its independence and integrity, the Council itself would not be elected. One third of the members would be appointed for set terms by the governor and one third by the lower house of the legislature elected in the human-scale, stepped system we have described. The other third would be composed of a rotating membership of citizens chosen, as in the jury process, by scientific sampling techniques indicative of the race, gender and regional makeup of the state.

No doubt, there are many permutations and refinements on this set of suggestive ideas. But they will appear less radical and more sensible as the systemic failure of American democracy deepens. So far, there are few signs that the system of money-fueled party elections we now have is able to mend itself.