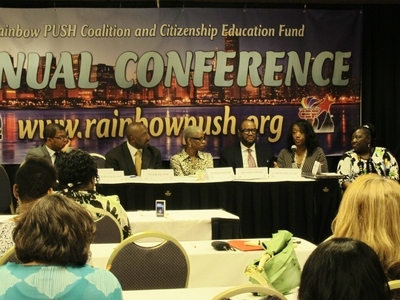 Post-race progress, where race is not considered a factor in our buying habits, business pursuits, or self-identity, is wreaking havoc on the Black niche industry and the Black community, a panel of experts argued during the 40th Annual Rainbow Push Convention.

Some argue that the Black consumer market is not as distinctive as before; to wit, in many markets Black radio has become the more diversified, urban radio, and race is not considered at all. 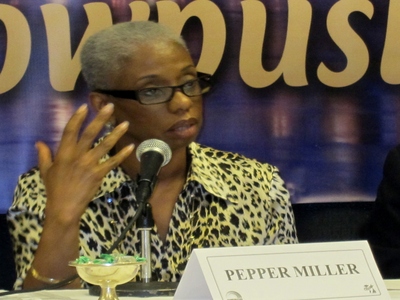 "Nobody wants to talk about race today," said leading African-American market researcher Pepper Miller. "People believe it's forward-thinking to not look at race and to not talk about race. 'So why do we need a Black agency? Why do we need Black media -- because people are people,' is what people say."

Assaults on the Black niche can be found everywhere. For example, why buy that Black women's publication, Essence, to read about Beyoncé, when Beyoncé is on the cover of the mainstream publication, Vogue, as well? Why hire a Black-owned advertising firm to craft a culturally sensitive message for Black teens, when, thanks to popular culture, Black, White, Hispanic and Asian teens hang together, party together and consume the same messages anyway?

This systematic retreat from Blackness has placed Black-owned advertising agencies and media outlets that create and disseminate cultural-specific messages and entertainment for the Black audience, in peril.

Still, post-race progress is not solely to blame; something more sinister is afoot, according to the panelists.

Specifically, advertising agencies hired by major corporations have greatly reduced -- or eliminated -- their spending budgets for the Black (and/or) urban market and are using the melting pot theory as an excuse to withhold those dollars.

Here's what the panelists said: 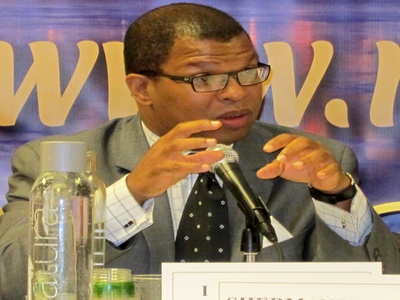 Sherman Kizart: "No Urban Dictate"
In 2009, panelist Sherman Kizart, managing director of Kizart Media Partners, received an explosive e-mail from the advertising agency for BMW/Mini Cooper. "In the body of that email was the directive of how this automotive [company] would spend its media dollars. At the bottom of the email was in clear bold writing: No African American, No Urban to be Included."

Armed with the e-mail, Kizart renegotiated with BMW/Mini Cooper's reps, and that resulted in a whopping 49 percent increase in Black and/or urban advertising buys, up from the previous year.

The battle is far from over, Kizart cautioned. "Discriminatory practices, as it relates to our media companies are so common and so prevalent there's a term for it -- It's called a No Urban Dictate when they don't do business with us."

Carol H. Williams: "When did you figure out that 'other' was a race?"
Audience measurement is a serious numbers game, and African Americans are doing their community a disservice by refusing to identify themselves as 'Black' on the US Census, says marketing maven Carol H. Williams.

For example, when Williams meet with automotive clients about the Black and/or urban market, she must provide data on the target audience's size.

"We can't even check the numbers to know how many are truly buying these automobiles, we just got a hint," Williams explained. "To track these numbers, we need a budget. When I go and say, 'I need a budget,' they say, 'well, the Census says these people are checking 'other.''
When did you figure out that 'other' was a race? I'd like to know. Other means give this money to somebody other than black." 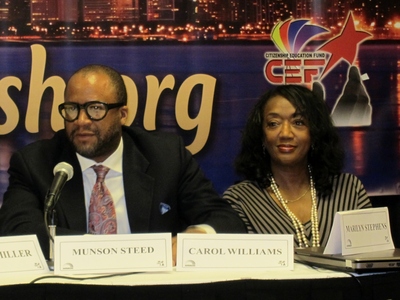 Williams clarified, "I understand the need to have self-identity, but when it comes to the Census, and the government, they're talking about money, what dollar goes where. And you're checking 'other.' [Pres.] Obama... checked African American. Don't you think that man knows who his mother was? He understands what that means."

Munson Steed: "We should be talking about jobs."
The discrimination continues with the lack of Black hires, according to Munson Steed. The lack of opportunity within advertising and creative industries have hit the hip-hop generation especially hard.

"When we talk about advertising we should really be talking about jobs," Steed said. "The reality of such discrimination right now is that most advertising agencies don't have a best practice to include your children. So when you look at these big holding companies that are doing the advertising for Delta Airlines, or American Family Insurance, and they don't have African-American agencies, you're literally saying that your child will probably not even get an entry-level job at these corporations."

Panel organizer Glenda A. Gill Executive Director Global Automotive Project for the Rainbow PUSH Coalition, revealed that the group of panelists have joined forces to approach the CEOs of major corporations that do not spend with Black agencies or hire Black youths.

"We're on one accord, we're on one page, and we're going to start with the automotive industry so you'll hear more about us," Gill stated. "This is our one set of rules campaign, and it's around equity and parity. No longer are we going to settle for pennies."