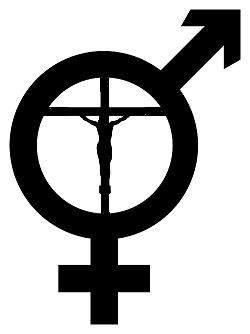 My wife and I have been thinking a lot about gender lately.

An article my daughter posted pointed out the layers of complexity of the issue which Caitlyn Jenner brought to America's door step. Women have been working for generations to not be labeled as simply soft, vulnerable, lipstick-slathered corset wearers. For over a century we've been trying to get society to accept that having the equipment necessary to grow babies doesn't mean women should be prevented from voting, or get paid less, or be kept out of scientific circles because of our emotional mushiness and our distracting sexiness.

Meanwhile, here comes Caitlyn, posing in undergarments and talking about being glad she can wear fingernail polish long enough for it to chip. Bruce fought for the chance to come out as Caitlyn and now talks about the relief of being able to chat with a group of women about what dress to wear to dinner. The excitement about her new ability to "act like a girl" is palpable.

It's all very confusing.

But reading through some of Caitlyn's interviews raised an interesting point. She mentions having been given the soul of a woman.

Here's what the scriptures say about the creation of humans.

I'd not really thought about the fullness of what this means until recently. I'd always focused on the binary statement of what He made: male OR female. But what this statement says is so much more profound than that, because it speaks not only about us as human beings, but about who God is. And that's a biggie.

Apparently the image of God is male AND female. (Not neither male nor female. BOTH male and female.)

I've always believed in traditional concepts of femininity and masculinity (vive la différence!), and have associated each with particular body types. I've also believed that this gender assignment remains beyond those bodies, traveling with us into eternity.

But lately I've been thinking more deeply about this question. When we are no longer equipped with genitalia, Adam's apples, or bone structure, what will our gender resemble? Will our presences in the mystical state known as heaven be intensified versions of binary genders, or will our spirits broaden to be even more like God. More fully both, just as He is?

Paul seems to think it's the latter:

And since this is the case, aren't people who are gender fluid actually more God-like than those of us who binarily gender identify?

In reading these scriptures, I think the answer has to be yes.