Of all the wonderful places to visit in Hawaii, none is so dear to me as Shangri La. Yet, when I mentioned I had been to Shangri La last week and shared my excitement with others, few knew what I was talking about! "You know, Doris Duke's mansion home and art collection?" 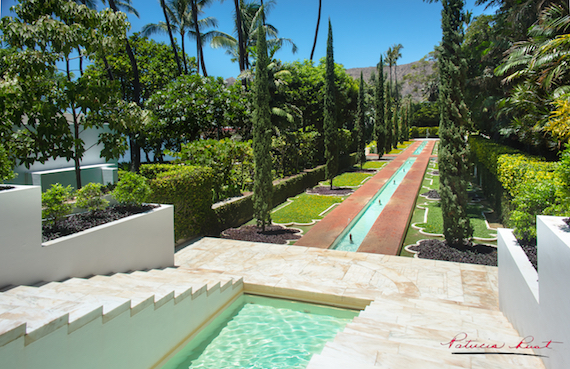 "Oh, yeah!" Those that had visited this treasure raved about it. And those who had not been, received an earful from me. Some may have heard of Ms. Duke in terms of Duke Kahanamoku or The Kahanamoku brothers. There is "The Duke" and there is Doris Duke! There are even rumors of a romantic liason between The Duke and The Doris but I think the reality is that all they were to each other was tandem surfers and great and good friends! Ms. Duke stood six feet tall and was an amazing swimmer and surfer, thanks to the The Kahanamoku brothers and their beloved father. She loved Hawaii and the whole of the Kahanamoku family. This being Duke Kahamoku Week -- it's interesting to come at this story imaging the fun they had together as she erected this magical place called Shangri La here in Hawaii! 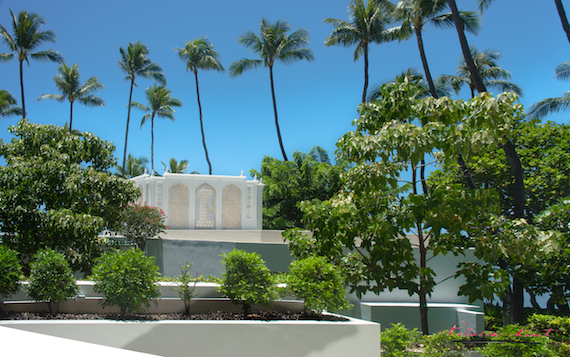 Imagine, if you will, a jagged Hawaiian coastline in the Diamond area around 100 years ago. Nothing but rugged nature was in evidence. Nothing but rough waves and rocks. Then, picture a young heiress who was terribly close to her late father, and having lost him at age 12, asked her husband, James Cromwell, while Doris was only age 20, to take her on an around the world tour. At the end of the tour she stopped in Hawaii and fell in love with Honolulu. Who wouldn't? 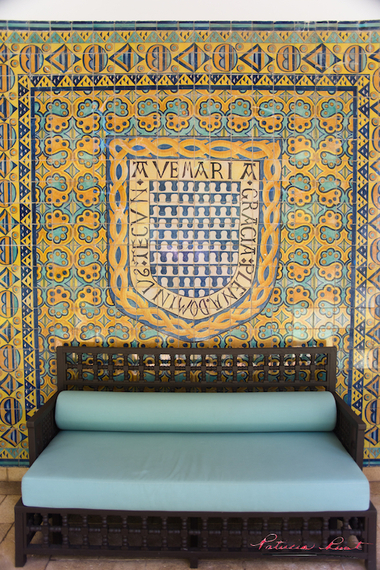 When you begin to put the jig saw pieces together, the portrait of a beautiful young woman with talent and vision emerge with the name of Doris Duke who bought her five acres of shoreline at Diamond Head and turned it in to a most remarkable property. How many young women have this kind of vision, discipline and care to turn it into a full time job and passion to do just that? 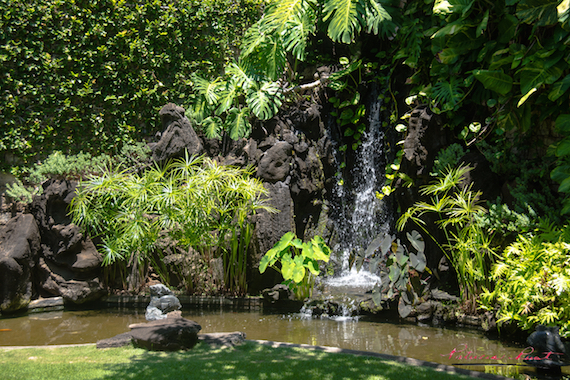 While it was begun when Doris was only 24-years-old and continued until her death in her 80s, Doris never stopped working on her museum home. Of course, in acquiring the 35,000 pieces that would go into the making of her amazing Islamic art collection, she went through different phases, first adorning her living room with the Chinese goddess of compassion, Quan Yin, and ending with her turning the dining room in a tented Turkish blue one! Along the way, the property became a horticulturist's dream, a passion Doris learned at her father's knee and never lost, and one only has to see the pictures of the property to appreciate the loveliness of the spectacular grounds. But seeing it is another story altogether! It is awe inspiring! 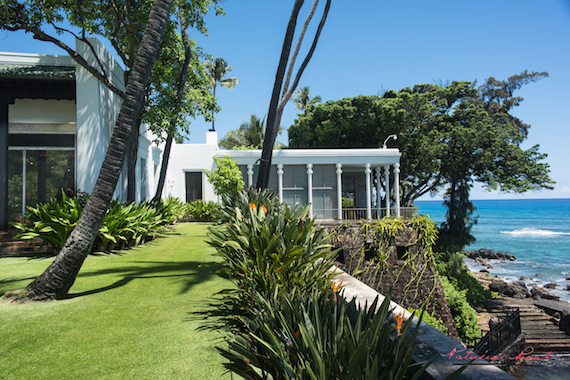 Her mother never came to visit her daughter here. The family had many homes in Newport, Rhode Island, Beverly Hills, New York City and places that spoke to their affluence, not places where Doris didn't let her guests in the front door but instead, sent them directly to the pool or tennis court because she was so private that she didn't wish them to come inside her intensely personal home. She was married twice, first to her aforementioned childhood chum, and later to the wild racecar driver/polo player from South America, Porfirio Rubirosa. She also had rumored romances such as the one to The Duke and even General George Patton but no one knows that I know. I think she was too busy collecting and curating and getting ready to leave behind over a one billion dollar legacy for others! 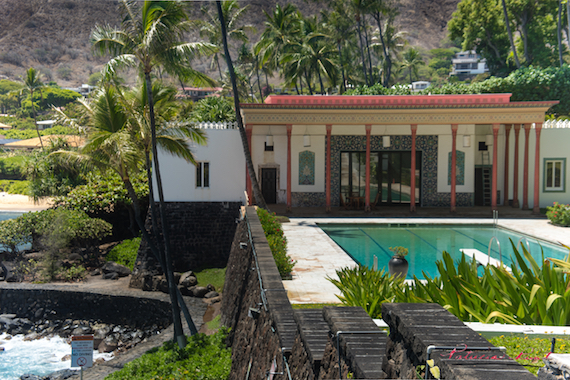 While Ms. Duke left her property to the public for us to tour and enjoy, she must have known that she was onto something raw and exotic when she first fell in love with the spectacular arches, the in-lays and the tiles of India. While most think of this work as coming from India, most of its roots were actually in Islam, she loved all religions, and she love the writing of Rumi which were often carved into doors and even hung one in her living room because of it's beautiful inlaid mother of pearl and bone. She loved the juxtaposition of design in the Islamic art world and often displayed it reflected in itself and often showed Iranian tiles set in cement tiles in walls that she would often take down and re-arrange. 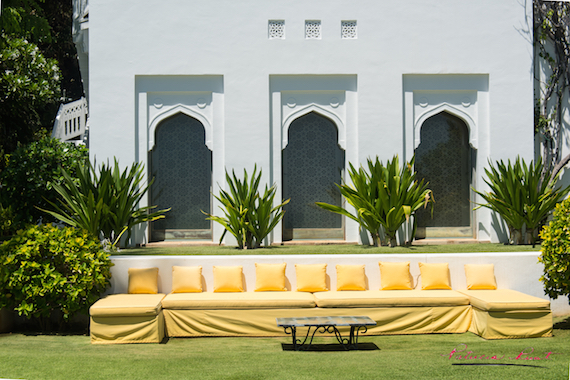 What's interesting is that while price was a non-issue to her in terms of her wealth and buying power, she was careful not to be taken advantage of and was a savvy bidder and buyer, keeping meticulous records and she often took tiles down to be moved or replaced with new ones. No one could rob her unless they knew how to blast out a mounting that weighted tons and could sneak it out in the middle of the night! Hardly likely! So she was savvy in her buying of gargantuan pieces that could not be taken! Ceilings and the like also could not be removed. She even imported an entire marble foundation from Syria for her Turkish Room. Try carrying that out! 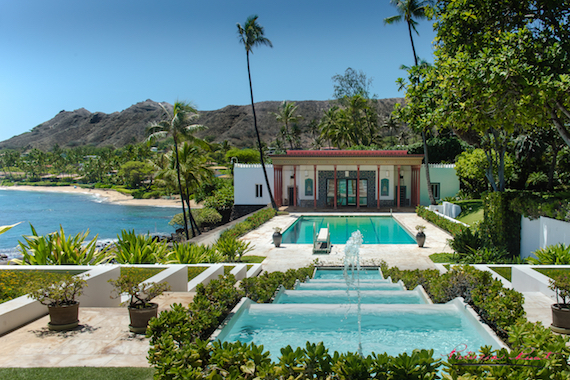 Her personal touches are everywhere. There are too many to go into here but I love those that hang over the fireplace and came from her father. They are majestic! You will have to discover them for yourself. Her bedroom and bath were just this year opened to the public and are very special as they mimic that which she saw on her very first trip to India! The inlaid marble is simply striking! You may not photograph the interior but are welcome to photograph the exteriors. 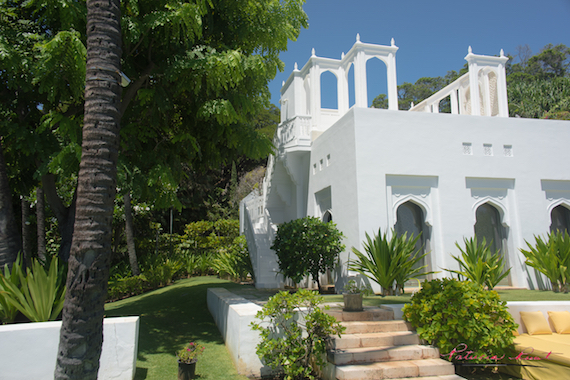 Doris Duke was a pioneer in collecting and now has the greatest Islamic art collection anywhere, it seems. Do not miss visiting this amazing home and collection. Appointments are necessary through www.honolulumuseum.org and tours are booked and conducted through the Honolulu Museum of Art and no one could do it any better. You meet there for refreshments and a short bus ride to the site. (Park next to the Blaisdell Center.) I suggest you have lunch there and make a day of it and enjoy the wonders of the marvelous Honolulu Museum of Art and breathe in the wonders of the aesthetic life!

Patricia Rust is the author of The King of Skittledeedoo and the upcoming novel, My Dangerous Secret, and for children, I'll Call You Back. www.patriciarust.com