On the day that a certain candidate announced his exploratory run for president this year, he said the following:

"We've created essentially a green primary...and the candidates spend all their time sucking up to these people giving them money so that they can be qualified to run in a general election. That is a perverse corruption of the basic equality of a representative system."

If you're someone who follows politics, it would be easy to make the guess that this statement (or at least the principle) had come from one of the three candidates who are leading in the early primary polling: Donald Trump, Hillary Clinton, or Bernie Sanders. All three of these otherwise philosophically disparate candidates have bemoaned the corrosive power of money in our political system, albeit through varying campaign styles and word choices. But that statement came from someone else. Someone most Americans have never heard of. Someone who already has my vote for president if his name makes it onto the primary ballot: Lawrence Lessig. 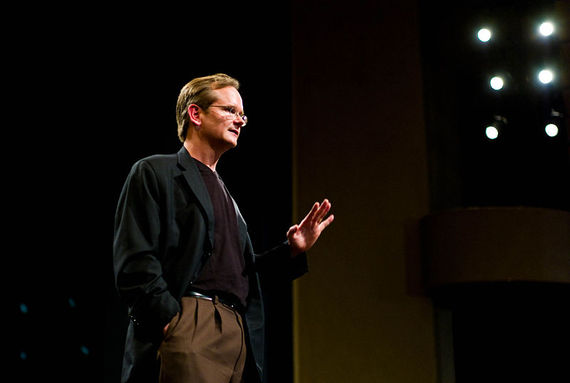 For folks who haven't heard of Lessig, he is the brilliant Harvard law professor, open internet advocate, campaign finance reform leader and author of Republic Lost: How Money Corrupts Congress--and a Plan to Stop It. Long before I wrote the first words of Unlock Congress, Lessig's comprehensive book was both an inspiration and substantial resource for the argument I was preparing to make about our defective legislative branch.

It is axiomatic in the political campaign world that someone without name recognition or the millions of dollars to purchase it won't travel very far. Right now, that's Lessig. But let's set aside feasibility for a moment and look at the substance of what the man is trying to do.

Lessig2016 is running on a straightforward reform platform designed to establish equality for all citizens in our democracy. Imagine that. It's called the "Citizen Equality Act of 2017." A measure to empower each of us to participate equally in the selection of our elected leaders. Right here in the United States of America.

One plank of the Act would give every voter a voucher to contribute to congressional and presidential campaigns, while leveraging small-dollar donations with matching funds (it would also place restrictions on the revolving door that shuttles people back and forth between government work and professional lobbying).

Another plank would guarantee "a meaningfully equal freedom to vote." This effort would include a form of automatic registration as well as creating an election day that would be designated as a national holiday.

Finally, The CEA would guarantee equal representation in Congress. Lessig defines this objective as follows: "districts must be drawn, and election systems structured, so as to give each citizen as close to equal political influence as possible." This would mean ending the scourge of gerrymandering in congressional districts, employing instead a "fair representation" process that would use multi-seat districts and ranked choice voting.

There is no question in my mind that all of these planks are incredibly worthy goals to pursue (and the specific solutions above addressing the money flood and rigged U.S. House districts are both promulgated in Unlock Congress). But we should make no mistake, the issue that is getting the most traction in this political moment is the one aimed at dethroning the cash kings. That's why we hear those three front-runners squeezing it into sound bites daily. Rarely does an interview go by where Bernie Sanders does not mention "the millionaires and billionaires." And in a Bloomberg Politics/Des Moines Register poll last week, one of the qualities that Trump supporters found most attractive about his candidacy was that: "His wealth frees him from the influence of special interests."

This resonates with Americans for a reason. For years we've known that something just didn't smell right in the cash-infused system. But now we can look to empirical data and research, and be quite certain. A recent study conducted by Princeton Professor Martin Gilens and Northwestern University Professor Benjamin Page drew stark conclusions about the power of the political dollar. Using a statistical model to analyze 1,779 policy issues in Congress between 1981-2002, they found that the average American truly gets the crumbs. The policy preferences of "economic elites" - defined as Americans in the 90th income percentile - were 15 times as important in determining policy outcomes versus what ordinary folks wanted. And let us keep in mind that the percentage of people in America who give more than $10,000 or more in an election cycle is less than .01 percent. In Gilens and Page's words, "the majority does not rule."

And of course, the slew of money coursing through the Capitol is all given and received within the rules. No laws are being broken. In Republic Lost, Lessig aptly describes what he labels "the gift economy":

"Think again about the dynamic of this platform: the crucial agent in the middle, the lobbyists, feed a gift economy with members of Congress. No one need intend anything illegal for this economy to flourish. Each side subsidizes the work of the other (lobbyists by securing funds to members; members by securing significant benefits to the clients of the lobbyists). But that subsidy can happen without anyone intending anything in exchange - directly. 'The system' permits these gifts, so long as they are not directly exchanged. People working within this system can thus believe - and do believe - that they're doing nothing wrong by going along with how things work."

Candidates need that money to get elected or reelected. So we can't just peg it all on them personally. The rules compel them to keep on scooping up cash from big donors to remain competitive. The system forces our lawmakers to behave like solicitous hamsters scampering atop a greased political wheel set to the maximum speed setting - with no off switch.

Would the public financing of elections through vouchers and small-dollar matching entirely solve the problem? Of course not. And it is possible, if not likely, that a constitutional amendment will be required to truly level the playing field and strip the disproportionate power away from the exclusive club of cash kings who are pulling the political strings. But first we must change the culture. And the CEA would be a big initial step in that direction.

So if so many Americans want to see the money flood turned on its head, why back a virtual no-name like Lessig instead of a Clinton or Trump or Sanders? If those three are talking about the issue and leading the other 19 candidates in terms of both poll numbers and financial resources, why throw our electoral chips on the long shot? Here's why: Because talk has become ridiculously cheap in Washington.

Saying that you're going to change the way money pollutes our political system is one thing -- making it the exclusive priority and detailing how to get it done is quite another. Lessig's big point in this picture is that no matter who we are electing to office and no matter what these candidates are promising, if we don't make unrigging the system the first task, we won't have positive outcomes on all of the other problems our government is expected to confront. 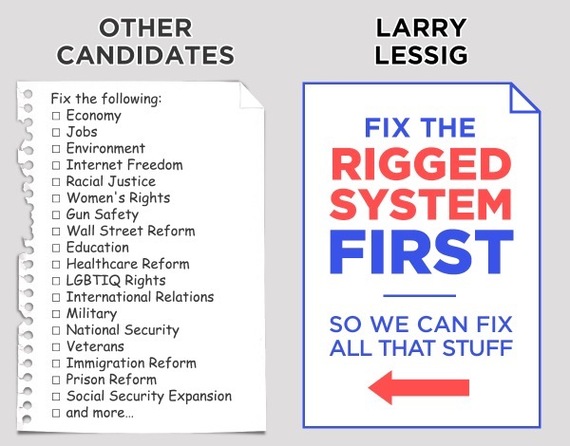 It would be an understatement to say that his campaign is an extraordinarily steep uphill battle. The candidate is aware of this. Then again, in a presidential race that so far has been the year of the proverbial "outsider," well, you just never know. "I do actually think that if people can see this as a real option, then they might embrace it," Lessig told the L.A. Times. "The consolation prize of raising the salience of that for the Democratic Party is worth all the scorn and derision and sleepless nights."

Lessig is running as a Democrat, but his argument challenges both parties - because both are complicit in our breakdown of government. Congress alone hit an all-time low public confidence rating last summer of 7 percent. A year later, after a change to single party control - 8 percent. Our legislature is mired in failure, and the money flood is a big reason why.

While it is true that actual campaign finance reform efforts in Congress do break down along partisan lines (a bill is pending in the U.S. House that is part and parcel of the CEA), that's not the case out in the country at-large. A CBS/New York Times poll published in June revealed that 84 percent of Americans believe money has too much influence in campaigns. Eighty-five percent of respondents said they favored either "fundamental changes" or "completely rebuilding" the way we fund political campaigns. We know that we have a problem, but it will take our collective commitment and action to fix it.

Unless we reform the rules first, the shabby status quo will remain and reign supreme. Why whittle around the edges and put our faith in stale political platitudes and impossible policy promises. In the face of daunting odds, let's dream big. Let's take the next step in making real reform a reality. It is the story of our country. Make a bold choice. Make a statement. Lessig for President.