In the summer of 1963, I rented the last room available from New York University's student housing bureau. I was late in my decision to enroll in an advanced chemistry course, a prerequisite for a pre-med program, and the director of housing explained that there was one unique space left. "It's the room under the bell tower," she said, pointing on the map to the Judson Church campanile tower, which stood on the south side of Washington Square. "After the elevator stops, you have to climb some steep stairs," she said, "but the view is extraordinary. There are windows in every direction."

I had never lived in New York City before and the thought of living in a tower perched above the feverish frenzy of Washington Square Park, with its ever changing mix of students, and tourists, beatniks and folk singers, left me breathless. Through the leafy trees to the north, I could see suntanned bodies dancing to the rhythmic beat of drums and, on Sunday afternoons, I could hear the folk singers with their guitars, gathered round the Washington Square Arch.

It was, according to Stephen Petrus, the curator of the current Folk City exhibit at the Museum of the City of New York (MCNY) and the co-author with Ronald D. Cohen of the companion book, New York and the American Folk Music Revival: Folk City, the peak of the folk music boom in New York City, a movement that traced its roots back several decades. During his research, Petrus interviewed folk icon Pete Seeger on four or five occasions, for almost an hour each time. Warm and generous, Seeger advised Petrus to go back at least to the 1940s. Seven months before he died in January 2014, he showed up at a June 2013 fundraiser for the exhibit held at the concert hall of the adjacent New York Academy of Medicine, where he led a rousing rendition of "Irene Good Night."

At the entrance to the show, visitors walk through an orange/red ante-room designed by Pure + Applied, both the designer of the exhibit and the book. On the floor, Woody Guthrie's lyrics to "This Land Is Your Land" are painted in large white letters. The song was written as a rebuttal to Kate Smith's "God Bless America" which could be heard everywhere on the radio during the 1940s. Guthrie's song, recorded by Moe Asch, was released at the end of WWII.

The exhibit begins with the Great Depression, with the first section of the show focused on the decade, 1929-1940. It was time when many folk singers began to arrive in New York City. There was Aunt Molly Jackson, a coal mining activist from Kentucky, who came in the early 1930s. Josh White, who introduced the Blues, and arrived from South Carolina. There was Lead Belly, who was discovered by Alan Lomax in a Louisiana prison, and who arrived in New York in 1934. During the 1930s, when Lomax worked for the Library of Congress, he recorded 10,000 songs. Petrus called him, "An anthropologist doing field work."

At the end of the decade, folk music became more receptive to political activism. Chain Gang by Josh White and his Carolinians, produced by John Hammond for Columbia Records in 1940, was the first album explicitly about civil rights.The cover of a collection of "Negro Songs of Protest," displays the work of left-leaning artist, Hugo Gellert.

Throughout the show, visitors can hear the songs on listening stations. Less successful are podcast/audiotaped recollections which have to be accessed by calling a phone number and entering a code. "Unfortunately," Petrus said, "they are not being used as much as I hoped they would be."

Petrus was hired by the Museum of the City of New York on an Andrew Mellon Curatorial Fellowship in 2012, two years after he completed his CUNY Ph.D. dissertation on the political and cultural history of Greenwich Village in the 1950s and 1960s. At the time, the Museum already had plans for a folk music show and a funder had provided seed money. The situation was perfect for Petrus, who drew upon Chapter Four of his thesis. He subsequently wrote the proposal and spearheaded the project from conception to completion. Ultimately, he borrowed from 25 lenders, mostly private collectors who were very generous, whittling down 800 objects on his list to a mere 225. "Folk music was part of their identity," Petrus said, describing the collectors as 60 to 80 years of age, white and middle class. "Consumers of folk music from 1958-1965 were largely college kids, left, liberal, kids who supported John F. Kennedy and civil rights," he said.

Over time, blessed by its community infrastructure, New York became a leader in the folk music scene. New York was increasingly the place for folk music concerts. In 1940, Pete Seeger and Woody Guthrie met for the first time at the "Grapes of Wrath" concert, which was held one year after the novel was published. In 1941-3, the Almanac Singers (co-founded by Seeger and Lee Hays) started a singing union movement and their anti-war album, Songs for John Doe was released in 1941. After Germany invaded the Soviet Union and the Red Army mobilized for war, the album became obsolete and Eric Bernay, the producer, destroyed the remaining copies. Maybe 1,000 copies were sold.

From 1948-1958, folk music institutions began to multiply. Folkways Records, a label founded by Moses "Moe" Asch was launched in 1948, The Weavers, a folk music quartet featuring Ronnie Gilbert, Lee Hays, Fed Hellerman and Pete Seeger, formed in 1948, and Sing Out! Magazine, a quarterly journal dedicated to the preservation of folk music appeared in 1950.

As the exhibit reveals, the Red Scare of the early 1950s interrupted the folk boom and took a heavy toll on the burgeoning music scene. Red Channels, the entertainment industry blacklist publication, included the names of many performers including Pete Seeger. Seeger, whom Petrus described as a communist with a small c, refused to testify although he did not take the Fifth. He was convicted for contempt of court, a conviction that was finally overturned by Congress in 1962. As a consequence of the court's decision, he was not allowed to perform on television or radio during the McCarthy era. Josh White testified before the House on Un-American Activities Committee. Decca Records terminated the recording contract of The Weavers, all of whom were on the list, and the group's popularity plummeted, resulting in their being disbanded in 1952. They did reunite in subsequent years as McCarthyism faded.

Artifacts from the decade 1948-1958, supplement wall text in telling the New York story: there are checks, telegraphs, scribbled notes and stapled magazines, often mimeographed. It was, Petrus said, "very much a do-it-yourself aesthetic."

By the time, the boom years, 1958-1965, arrived, folk music was mostly centered in big cities like New York, San Francisco and Chicago although it could also be found in college towns like Oberlin, Ohio. The Kingston Trio's version of "Tom Dooley," a folk song from North Carolina based on the murder of Laura Foster by Tom Dula sold more than three million copies as a single. Sales of the group's eponymously titled debut album, released in 1958, exceeded 1 million by 1961.

A wall map shows the density of folk music clubs in New York, clustered south of Washington Square Park: The Bitter End, The Village Gate, The Gaslight and Gerde's Folk City. The original sign for Gerde's now hangs in the show after languishing in a garage for 28 years. Most were basket houses, with the performers getting a share of the evening's take. A few performers, including Tom Paxton and Julie Collins, did earn their living from their music.

Prominent artifacts in this section are "Baby," Odetta's guitar from 1951, Judy Collins' guitar from 1970 and the signature objects in the exhibit, four original manuscripts of Bob Dylan songs, borrowed from a private collector: "Blowin' in the Wind," "Mister Tambourine Man," "Maggie's Farm," and "Masters of War."

Rare footage shows protestors who opposed Parks Commissioner Newbold Morris's banning of Sunday afternoon folk music in Washington Square Park in April 1961.The Right to Sing Committee, including the Reverend Howard Moody and Izzy Young, managed to prevail and Mayor Robert Wagner repealed the short-lived ban in the middle of May. The protest pitted high culture supporters like Morris, who was involved with Lincoln Center, and the New York University President vs. the Village Independent Democrats (VID), activist Jane Jacobs and folk singer supporters. Only two years earlier, Jacobs had led a group that defeated Robert Moses's plan to run a highway through the park.

Of course, what happened next was that the four lads from Liverpool arrived! Beatlemania swept across America and New York City. But, as Petrus said, folk music in some form or other survived. There was the Hootenanny Variety Show, which incited the Left who felt that the people's music was being commercialized. There was folk-rock in the 1970s and ethnic folk music in the 1980s. Today, there is the Jalopy Theater in Red Hook. When Petrus moderated a panel on "Dylan Goes Electric" in July with Elijah Wald, David Hajdu and Terri Thal, who was Dylan's first manager, some 240 people showed up.

Attendance at the exhibit has been strong although getting folks to travel to uptown Fifth Avenue museums like the Museum of the City of New York on 103rd Street, and El Museo del Bario, between 104th and 105th Street, isn't easy. To date, The Africa Center at 110th Street is still under construction. "Folks take the Number 4 and 5 trains to 86th Street and they then ask, "Am I in Upstate New York?" Petrus said.

The Museum has exhibited several major shows over the past years on The Greatest Grid:The Master Plan of Manhattan, 1811-2011, and on Capital City: New York's Banks and the Creation of a Global Economy. But their goal now is to attract a larger audience with a permanent exhibit that will open in the fall of 2016. Housed in the three first-floor galleries, it will provide an overview of New York City history, with the first gallery focused on the Colonial period to 1898, the second, on the years 1898 to 2012 and the third, on the present and the future. "This is the only Museum that focuses on the history of the five boroughs," Petrus said, differentiating it from the New-York Historical Society (NYHS) which "focuses on the five boroughs in the context of American history."

Petrus, however, will no longer be working for the Museum when the permanent exhibit opens. He has just accepted a Mellon Research Fellowship across the park at the New-York Historical Society. 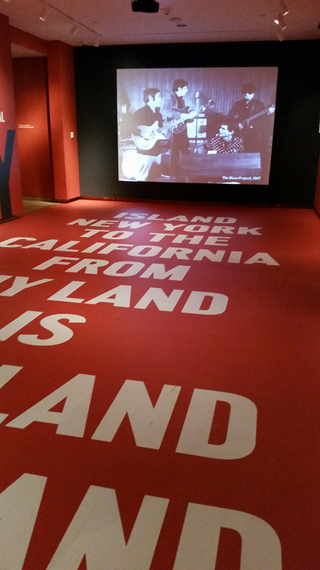 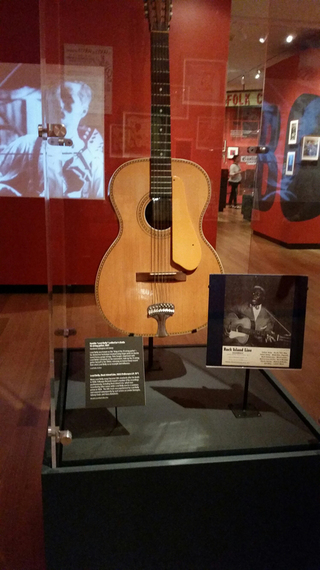 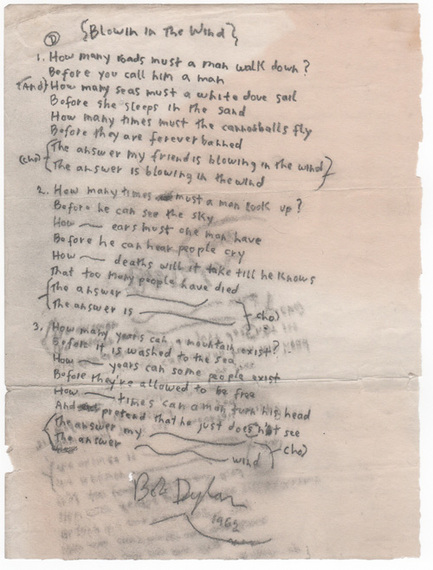 Original Manuscript of "Blowin' in the Wind," 1962 (Private Collector) 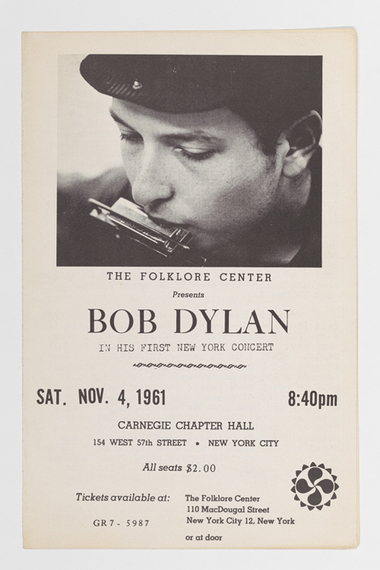 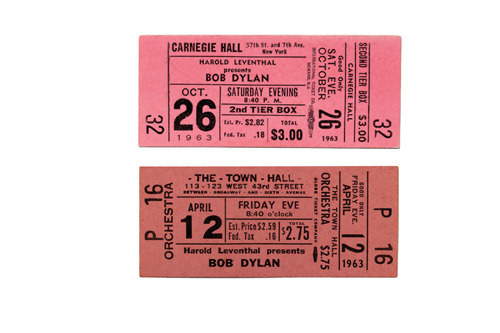 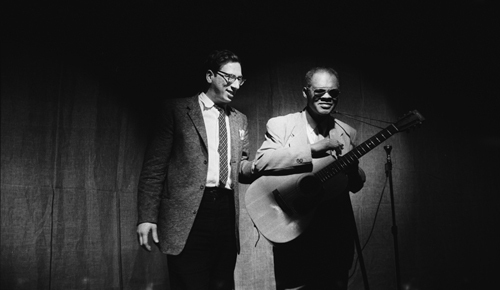 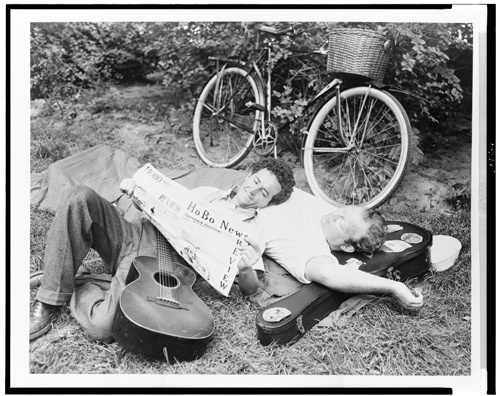 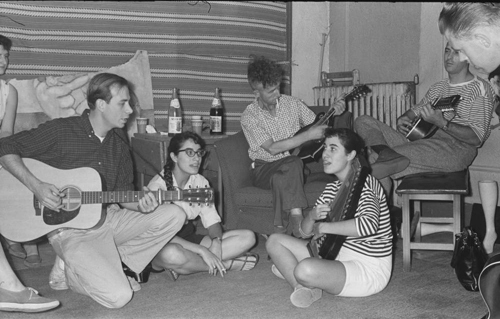 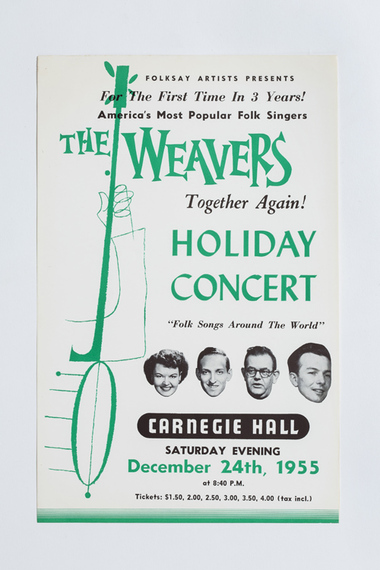 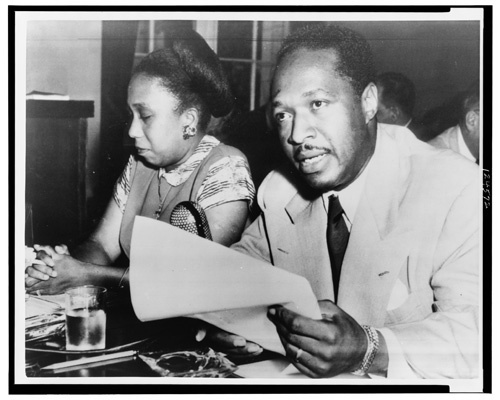 Josh White testifying before the House Un-American Activities Committee, accompanied by his wife, 1950 (Library of Congress) 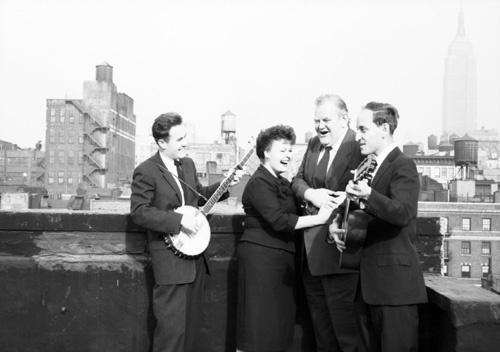 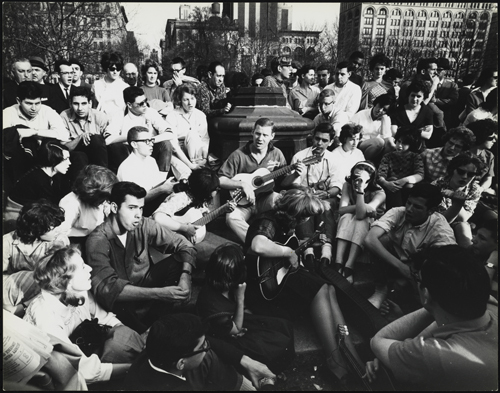 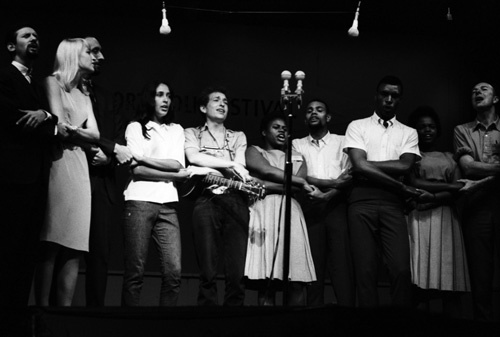