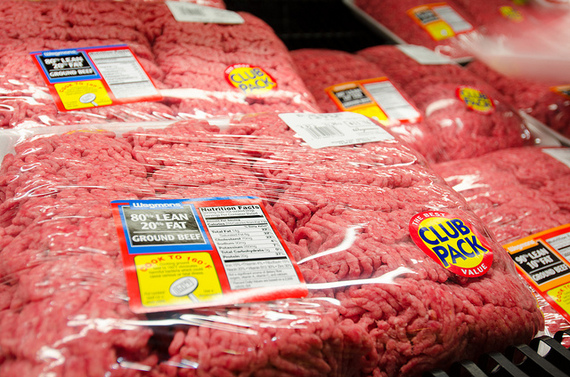 Just in time to put a damper on your Labor Day barbecue, the latest edition of Consumer Reports Magazine hit newsstands yesterday with the cover story, "How Safe is Your Ground Beef?" Our two-word summary: Not very. In fact, the recent Consumer Reports study profiled in the article revealed that every sample of ground beef collected by researchers from supermarkets around the country contained enterococcus and/or nontoxin-producing E. coli, which indicate fecal contamination. In other words, all the beef had poop on it.

Pretty gross. And pretty dangerous - since feces can contain a host of harmful bacteria that can sicken (or kill) humans, this degree of contamination presents a serious food safety risk. In fact, according to a report by the FDA and CDC, 46 percent of E. coli O157 illnesses and nine percent of foodborne Salmonella illnesses could be attributed to beef. Between 2003 and 2012, outbreaks of E. coli O157 related to beef (mostly ground beef) sickened 1,144 people, causing 316 hospitalizations and five deaths.

Why so Contaminated?
As with many problems related to livestock production, it all goes back to manure. When beef cattle are slaughtered and processed, fecal matter from their hides and intestines can end up in contact with the cuts of meat and fat trimmings. The problem is exacerbated by the high speeds at which cattle are processed in industrial facilities (some slaughter as many as 400 cattle per hour), which creates more room for human error, increasing the likelihood of feces ending up on meat.

Industrial production practices also contribute to the problem; cattle raised "conventionally" spend the end of their lives being fattened within confined feedlots without vegetation, where they often stand in mud and their own manure. On average, these factory farms hold 4,300 beef cattle, but many are much larger; feedlots confining 32,000 or more cattle represent 40 percent of the market. Put that many animals in giant bath of mud and manure, and you end up with some pretty filthy cattle being sent to the slaughterhouse. Factory farmed cattle are also fattened on an unnatural diet of grain, which increases the level of acidity in their digestive tracts, and which scientists believe may cause greater shedding of E. coli from the cattle.

Ground beef is particularly susceptible to contamination since the grinding process exposes more surface area to bacteria. Furthermore, huge industrial processing facilities typically create an end product composed of meat and fat from many different cows, increasing the risk that tainted meat from one cow ends up contaminating meat from many others. From a food safety perspective, ground meat is also problematic since, unless it's cooked thoroughly all the way through, harmful bacteria can persist after the food is served. (Conversely, with whole cuts of beef, bacteria are more likely to be present on the outside of the meat, and therefore killed during cooking.)

Putting Ground Beef to the Test
In order to determine exactly how contaminated our ground beef really is, Consumer Reports (CR) undertook an ambitious study, testing 300 packages of ground beef (a total of 458 pounds) from 103 stores in 26 U.S. cities. CR also chose to investigate whether the rates of bacterial contamination differ between beef from cattle raised "conventionally" (i.e., from cattle fattened on grain in feedlots and typically given antibiotics and/or growth-promoting drugs), and beef from cattle raised more sustainably (in this category, CR included beef that had one or more of the following characteristics: no antibiotics, organic and grass-fed).

CR scientists analyzed 181 "conventional" and 119 "more sustainable" beef samples to identify five common types of bacteria: Clostridium perfringens, E. coli (including O157 and six other toxin-producing strains), enterococcus, Salmonella, and Staphylococcus aureus. Scientists also tested all bacteria that were discovered to determine if they were resistant to antibiotics in the same classes used to treat humans.

Complete results of the study are available in CR's full report, but a few key findings are worth noting:

As Urvashi Rangan, Ph.D., executive director of the Center for Food Safety and Sustainability at Consumer Reports said of the study, "[w]e know that sustainable methods are better for the environment and more humane to animals. But our tests also show that these methods can produce ground beef that poses fewer public health risks."

What to Do about Tainted Beef?
Based on their findings, Consumer Reports made several recommendations to the FDA and USDA, calling on the agencies to prohibit the use of antibiotics in healthy animals, reduce consumer confusion by banning meaningless labels like "natural," expand the animal welfare standards for organic beef, improve food safety inspection at slaughter and processing facilities, ban the sale of beef containing antibiotic-resistant Salmonella, and (our personal favorite), to prohibit the inclusion of chicken waste in cattle feed (because yes, factory farm operators actually engage in this practice).

You can find many of the restaurants, farms, farmers' markets and other businesses that offer sustainably produced beef using GRACE's Eat Well Guide. But if you end up at an end-of-summer barbecue with conventional beef burgers, you might want to grill yours to the hockey puck state.