In 2004 I published an article entitled "A Western Fix for Iraq? Forget it" in which I suggested that the U.S. and its allies would be unsuccessful in transforming Iraq into the western democracy they hoped it would become. Much of what I wrote more than 6 years ago regarding the challenges facing Iraq unfortunately remains true today.

The root of the problem is that human beings are hard wired to be tribal. Iraqis' instincts are to identify with others who share their ethnicity and religion, and to be suspicious of others who do not. Iraq continues to struggle with the same fundamental issues surrounding the diversity of its people's religion and ethnicity as has been the case since the founding of modern Iraq in the 1920s. It takes great liberalizing institutions, decades of time, and much motivation to achieve the kind of integration Iraq requires to succeed as a country. Having been created by the British with boundaries based on geography rather than ethnicity, religion, or history, the country's fate appears to have been sealed.

The net result of the 7-year war -- with more than $1 trillion spent by the U.S. government and tens of thousands of lives lost -- is a dysfunctional state that functions little better, and in some cases worse, than it did under Saddam. In 2003 there was cautious optimism among average Iraqis that their lives would be better 7 years later. Today many Iraqis have since sunken into despair. A survey released in January 2010 of 1,015 Iraqi adults noted that 51% believed 2010 would either be better than 2009, but 46% believed it would be either the same or worse:

A big reason for the pessimism was a lack of faith in the country's political leaders, and the political system itself. While polls confirm that Iraqis clearly prefer democracy, the partisanship and gridlock that has resulted from 'democracy' has brought Iraq to a political standstill, as evidenced most recently by the standoff between current Prime Minister Al-Maliki and former PM Allawi. The resulting impasse has tested Iraqis' basic political beliefs and created an opening for extremists to return to the arena through violence. Sunnis are not happy that Al-Maliki appears to have won the political battle. Extremists among them have promised to object the old fashioned way.

A survey of 2,228 Iraqi adults taken between March 2007 and February 2009 asked Iraqis to identify the single biggest problem facing the country. Security remained at the top of the list, followed by political, economic, and social issues. Economic and social issues had risen over the two-year period while political issues remained the same:

Although America's combat role has ended, the security environment remains a concern to the average Iraqi, some of whom say the perception of security is actually worse, given that the bulk of the multilateral troop presence has now departed. Although according to Brookings the number of civilian casualties is a small fraction in 2010 of what it was in 2004 (16,800 versus 1,564 through July 2010), the number of deaths per day from suicide attacks and vehicle bombs is actually higher today than it was in 2004:

Iraq is near the very bottom in Transparency International's Corruption Perceptions Index, ranked 176th out of 180 countries in 2009. In 2003, Iraq was ranked 113 out of 133 - meaning, corruption has gotten significantly worse since the end of the Saddam era. Reporters Without Borders ranked Iraq 124th out of 166 in 2003, and 145th out of 175 in 2009, which means press freedom has actually deteriorated since democracy was introduced to the country. And the 2010 Freedom House ranking of political freedom continues to rank Iraq as 'not free', with a political rights ranking of 5 out of 7 and a civil liberties ranking of 6 out of 7 (7 being the bottom).

Another factor contributing to Iraqis' despair is the state of the economy and basic services. Here again, in some respect, the Iraqi economy is worse off than it was during Saddam's rule. According to the Financial Times:

Baghdad residents receive just a few hours per day of electricity in spite of the U.S. having spent more than $5 billion to upgrade the power sector since 2003. Although electricity generation peaked at 6,700 megawatts in June of this year, total demand now exceeds 11,000 megawatts. In the 2009 poll, the availability of clean water, medical care and fuel was rated lower in 2009 than in 2004.

How do you Rate the Availability of Services in your Area?

Source: Brookings Institution (Fuel is for cooking and driving)

Iraq's oil ministry has announced that the country's oil reserves are now estimated to be 25% higher than previously thought, at 143 billion barrels. That should be cause for celebration, but taken in context with the plethora of ills that continue to plague Iraq, it is hard to be optimistic about Iraq's long-term future. When Iraqis hear proclamations like this from their government, the depth of their disillusionment only rises, because they know the government will in all likelihood not be able to transform the country's potential oil wealth into a better life for most of the country's 30 million people.

According to the International Energy Agency , Iraq's monthly oil exports were 2.484 million barrels per day (mbpd) in February 2003 - the month before Saddam was overthrown. At its post-invasion peak (February 2010), Iraq's monthly oil exports were 2.475 mbpd. So it took 7 years to bring the country's oil production capability to a par with what it was prior to the invasion. Monthly oil revenue reached a peak of $7 billion in July 2008 and retreated to approximately $2 billion in January 2009, where it has remained. It is projected that Iraq's oil production will peak in 2022, based on known reserves and exploitation capabilities. If true, Iraq's ability to fund its future development will more limited than many anticipate. 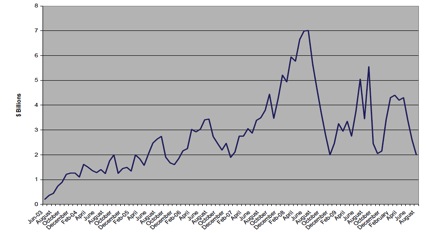 Given the number of years that has passed and the resources expended by the U.S. and other governments to attempt to transform post-Saddam Iraq into something better for the majority of its people, on the basis of comparative performance of the indicators addressed in this article, Iraq's democratic experiment must be judged an abysmal failure. Many economic and social indicators are worse than they were prior to 2003, the country is more corrupt, and the life of the average Iraqi is little better -- and in some instances worse -- than it was under Saddam.

As reprehensible as he was, many Iraqis undoubtedly long for the stability and predictability of life under Saddam. Given that the U.S. has withdrawn its combat troops, a total withdrawal of U.S. forces is slated for the end of 2011, the political gridlock the country has experienced over the past year looks set to continue, and a return of heightened political violence seems likely, the future does not look good for Iraq.