Queen Elizabeth's II trajectory from fairy tale to legend: Thursday September 10, 2015, marks day 23,227 in her reign -- her first full day as the longest reigning monarch in the history of Great Britain 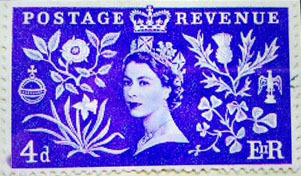 A postage stamp commemorating the coronation of Elizabeth II, 63 years ago

My Lord of Warwick, hear me but one word:
Let me for this my life-time reign as king.
Confirm the crown to me and to mine heirs,
And thou shalt reign in quiet while thou livest. (King Henry the Sixth- part three)

The period of 23,226 days also translates into 63 years seven months and two days. In the pages of a history book such a time frame does not usually cover more than a paragraph in a chapter. In the case of a head of state such a time period begins to seem like a long time if referring to the span of the reign of the monarch. In fact this was the record set by Queen Victoria as the longest reigning monarch of Great Britain. That is until Wednesday September 9, around 17:30 (GMT) when Queen Elizabeth exceeded the bounds of her great-great grandmother in wearing the crown, thus becoming, herself, the longest reigning monarch in British history.

This may be the best moment to dwell on the meaning of the crown in its historical and political context but also culturally, through the sayings of its greatest advocate, who also happens to be the greatest master of the English language, William Shakespeare.

Ever since it was forged, 1,500 years ago, the English Crown holds its magic for millions of people around the globe. Events linked around this institution, such as coronations, royal weddings and funerals, occasional appearances or speeches of British monarchs have been enjoying the highest ratings in the media ever since media was invented. The main protagonist has always the monarch herself, the queen.

York cannot speak, unless he wear a crown.
A crown for York! and, lords, bow low to him:
Hold you his hands, whilst I do set it on.

No king or queen is invested until the moment the crown has been placed on their head.

The ceremonial object (or piece of Regalia) used in Britain for the investiture as the holder of the highest political office of the land, is the crown of King Edward the Confessor, considered the token of status of a monarch. To paraphrase Shakespeare's Henry VI this crown is the medium through which and with which the people 'honor the bearer as their King and sovereign.' First used by King Edward it has been worn by all monarchs, even by William the Conqueror (in 1066) who insisted on wearing it to stress the continuity of tradition- despite his seizing the throne after having invaded and conquered the land. The diadem was destroyed by Oliver Cromwell when he tried his hand at the republic (and failed dismally to convince the English to part with their crown). Surviving parts and stones of this relic were recovered and remodeled into the new crown of Edward the Confessor for the coronation of Charles II (1661) and for most coronations ever since. 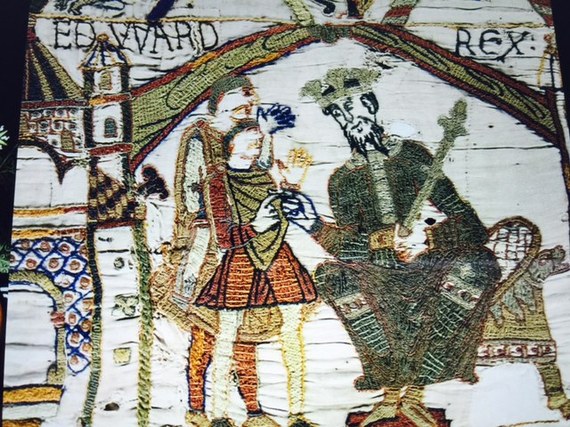 Ay, marry, sir, now looks he like a king!

Set in precious stones this crown weighs slightly over four pounds (the reason why Victoria chose to break with tradition and not use). 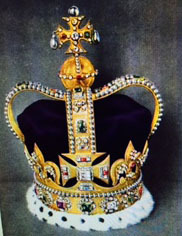 The Crown is a corporation that represents the legal embodiment of executive, legislative, and judicial governance. The monarch, being the bearer of the crown, is considered the living embodiment, the manifestation of the crown and by extension is regarded as the personification of the state. Historically the crown has always been the most recognizable symbol of a monarchy and the one tangible item that can be 'paraded' around the streets in open carriages adorning the heads of the monarchs and reminding, in such ceremonial occasions, of the mutual bond between the monarch and his subjects. Representing the nation in its totality that and does not have the right to vote, It is considered focal point of unity and solidarity of a nation.

And so the word has passed down to day to day language, coming to mean the top of the highest part of the head (where the crown usually sits) and by extension the highest point of a summit where eternal snows might glow serenely. In its verbal form, 'to crown' evokes the completion of a task or the rendering of something perfect by stressing success to it (adding a touch of exultation to the process).

Aristotle in his analysis of tragedy pointed to the downside of the crown reminding us that the most potent tragic element in a serious play is the adverse fortune of kings. Reminding us in Richard II that the seemingly carefree life of a monarch is filled with obligations and cares and that the weight of a crown can weigh heavily on the head of the bearer Shakespeare writes:

My crown I am but still my griefs are mine

Now is this golden crown like a deep well, That owes two buckets, filling one another, The emptier ever dancing in the air, The other down, unseen and full of water: That bucket down and full of tears am I, Drinking my griefs, whilst you mount up on high.

Finally, for the most notorious of its bearers, the infamous Richard III, the crown turned into an obsession.

Queen Elizabeth II started her long and winding road inheriting the Empire that placed queen Victoria in the hall of fame, naming after her the greatest part of the nineteenth century; the Empire 'over which the sun never set'. However, Elizabeth's Land of Hope and Glory turned, soon after her accession to the throne, into a country of shattered imperial dreams, grim financial realities and rampant liberal tendencies that considered the crown as an antiquated, useless and extremely costly accessory

Despite these adversities Queen Elizabeth fulfilled the popular and ironic prophecy of the mid-twentieth century that said that by the year 2000 the only remaining queens in the world would be 'the four, figuring in the deck of cards and the queen of England'.

She not only managed to retain her crown but, by walking hand-in-hand in close collaboration with the twelve prime ministers of her reign -- the first being no other than the larger-than-life Winston Churchill who "guided the first steps of an inexperienced girl", as she is supposed to have timidly referred to her beginnings -- the Queen established herself (for the benefit of her nation) as the most efficient public relations institution and most potent magnet for investors in the world. In a world based on the Economy the queen was able to transform her crown from a museum piece into an efficient instrument of finance.

In becoming the longest reigning monarch in the history of her 'sceptered isle,' Her Majesty Queen Elizabeth II is moving today from the fairytale land assigned to her, into another realm, one reserved to the some of the most important political personalities in History: the legendary. 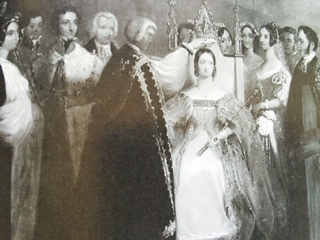