Although humans are born with an innate fear of falling, and a need for sucking, these mortal super-heroes have an innate need to fall, and a fear of sucking...herewith, a preview of this weekend's Red Bull cliff-diving championship in Italy, and a brief history of a very old bridge.

A Troubled Bridge Over Neretva's Waters...

In addition to being an obviously useful feat of design benefiting humanity through nearly five centuries, the original stari most (translation: "old bridge") in Bosnia-Herzegovina was a universally beloved landmark, and a rare example of Islamic architecture in Europe. It was destroyed in the Fall of 1993, during the Croat-Bosniak War, amidst the eternal degradation that is sectarian -- make that ALL -- warfare. 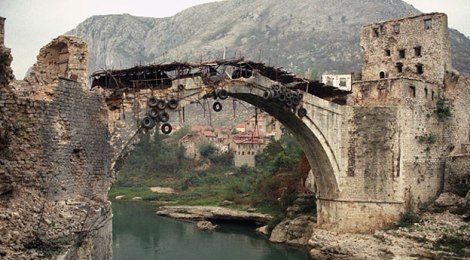 Prior to its destruction, stari most was in a state of disrepair, which, looking at this photo, seemed to imbue it with a poignant sense of enobled endurance. Of course, I write these words as a foreigner; to locals, its condition must have symbolized many different things.

Certainly, no thing made of mortar is of greater value than a single human; clearly, however, the destruction of this bridge signified something inestimably more than yet another structure turned to rubble, as I personally learned, when I showed this footage of the bridge being destroyed to an old friend, a genuinely non-partisan, secular humanist, proud son of the former Yugoslavia, who, never having seen the actual moment of stari mosts's collapse, was, now some twenty-plus years on, in tears.

All bridges are -- by obvious virtue of uniting otherwise disconnected places, and making otherwise impossible-to-cross areas easy for all to pass -- noble symbols of human progress. This is why I had to begin this video with what I earnestly hope will be seen as a humanistic, non-partisan look at the past, before celebrating a timeless rite of passage that bridges also make possible: the overcoming of one of our most basic fears through a rare feat of self-conquest that demands us to take leave of this earth in order to re-join it in a truly spectacular creative act which simultaneously negates earth's power over us, whilst fully embracing it.

As a New Yorker, looking at the footage of the young man jumping into the river Neretva, surrounded by what seems like half his 'hood, I am reminded of the late Jim Carroll's Basketball Diaries, in which he tells of a rite of passage that we Bronxites (well my brothers, I was too young and sheltered) know well: the jump into the East River, exquisitely timed to land in the water between the waves of, well, shit, bottles, general garbage. (Not-so-fun-fun fact: The East River is actually an estuary, changing direction several times a day, hence the deadly whirlpools that, along with train-surfing have claimed the lives of many a too-young-to-die New York soul). 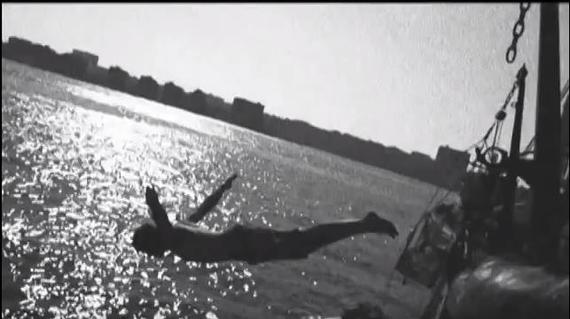 Hot day in NYC? No prob, just jump into that river you happen to be walking by...well done. (video still)

By way of a side note, 'always fascinating, the insouciance with which travelers from abroad approach American taboos -- in this case, whether one can or should swim in the Hudson River, a once majestic waterway that had become totally polluted with all conceivable detritus: hypodermic needles, oil slicks, sewage, and the odd body or three. But thanks to the folks at Riverkeeper (founded 45 years ago over concerns about the Hudson) and their engagement in a full-on reclaiming of the river, maybe we'll see proper beachheads along the Hudson -- if the cruise ships now pulling into the west side of Manhattan can be kept from fucking the river up; one look at the trail of garbage left behind by these ships when they dock, leaves one with major concern.

And though the Hudson River is a heckuvalot cleaner than in the 70s, I still marveled when, whilst packing up my cams after shooting a Kings of Convenience video on The Frying Pan, (see "Random Notes" at end of blog) these cats jumped in to cool off, and so I scrambled to film them, and subsequently had to distract park security from noticing their stealthy escape and arresting them. It was such a New York moment that I included their dive and swim in the opening and close of the video. Whoever you were, know that I love you for your simple act of liberation. The shot of the guy helping his girl out of the water is one of the most romantic events I've ever filmed.

And though I've not ever jumped into the East River nor the Hudson River, I have found myself setting an appropriately bad example by joining a buncha teenagers in dragging a vacated-for-the-evening lifeguard chair into the waters of Coney, and creating an impromptu diving platform. Hopefully, eventually, we all find our plunge into rites of passage, relative to our levels of acceptable risk, and the challenges we have available to us.

Of course, the athletes diving this weekend do more than take the plunge; theirs is an acrobatic-gymnastic accomplishment within a scoring paradigm which is highly unforgiving of even the slightest deviation from a standard line of control. Rather than celebrate my grasp on the obvious with another sentence like the prior one, herewith, the eight competitors in the women's championship, listed alphabetically. 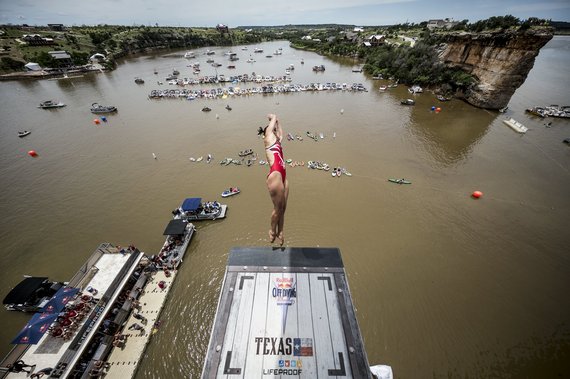 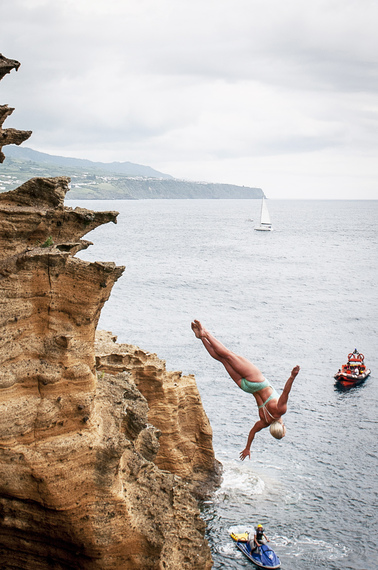 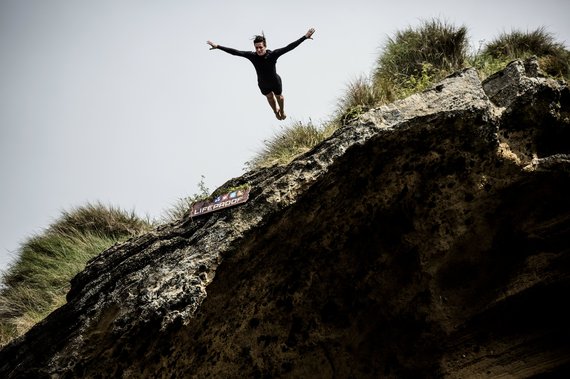 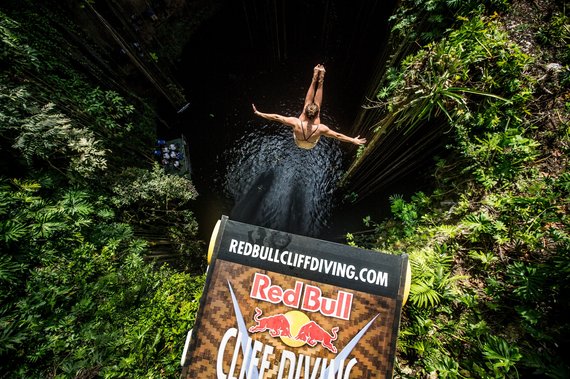 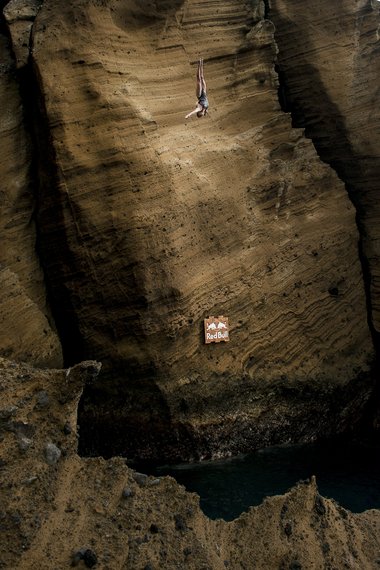 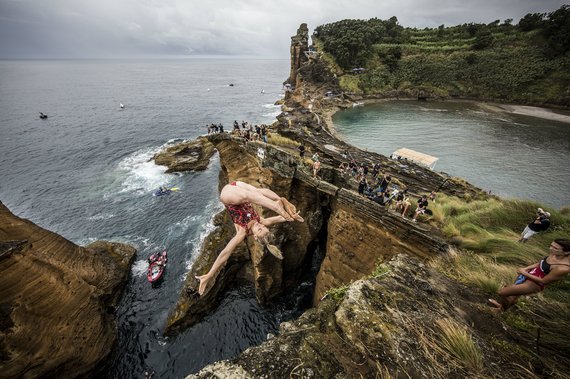 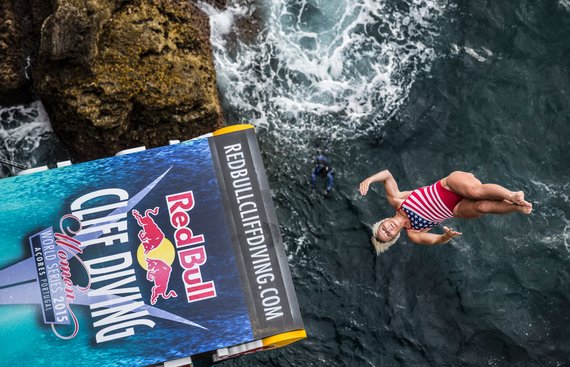 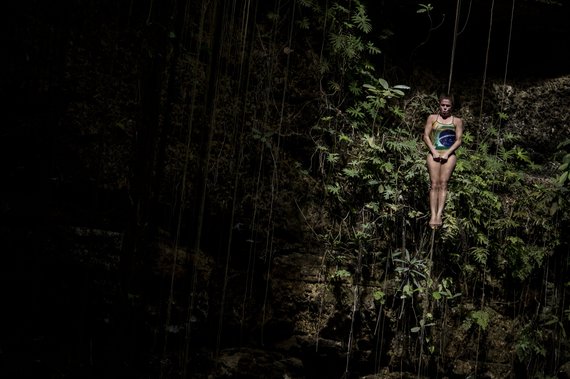 What makes the women's championship this weekend in Italy particularly dramatic is the total absence of statistical inevitablity/redux that often circumscribes any possibilities for upset late into a series, when the winner is a foregone conclusion. Indeed, the championship is fully within reach for half of the eight competitors -- and since this is the very first time any of them have competed at this site, all prognostication, is well, out the window.

Conversely, because the men's winner is a statistical lock (even though there's one more men's event in Spain) you can very correctly say that the men's competition this weekend is about waaay more than the championship. And with Mexican wildcard Sergio Guzman delivering what Red Bull's Paul Yoffe describes as "one of, if not the best finishes for a wildcard in recent memory" by placing 2nd just a few weeks ago at the stop in Mostar, the statistical inevitability has, by virtue of predestination, very seriously changed the tone, making for one very interesting weekend in Italy.

Live viewing of The Red Bull Cliff Diving World Series in Italy will be geo-blocked in the US this weekend; however, it will be broadcast on FOX Sports 1 on 10/26 at 7 pm ET. In the interim, you can binge-watch the entire series HERE Folks in other countries can watch it live HERE

The folks at Wikipedia are compiling a database of landmarks, and they're hosting a photo contest, inviting anyone who has an image to share, to upload it; there are a variety of copyright options you can put in place, and given the alarming (sadly, to the point of denial) rate at which we seem to be destroying ourselves, our environment and our landmarks, it's a wise idea to save our memories.

From wikimedia: The grand prize will be a trip to Wikimania in Esino Lario in June 2016, including travel and accommodation. Wikimania is the annual meeting where users from Wikipedia and Wikimedia from all over the world meet each other and discuss the global movement. This prize has a maximum value of €2000.

So come on, those of you inclined to purge the world of various historical sites -- do the rest of us a favor, since we don't all have your travel budget: break out those cameras and show off your production value before you destroy another landmark! You could win a trip to the resort town of Esinmo Lario!

On the subject of an infinitely less (cumulatively) significant loss, albeit a permanently heartbreaking one right here at home, this New Yorker, born on the hill next to Yankee stadium, stopped being a Yankees fan and will never enter the new stadium, after, well, goddamn money-grubbing neanderthals tore down the house that Ruth built; the hallowed ground where Joe Louis, proud son of a demented, segregated USA, defeated the even more demented Adolf Hitler's superman Max Schmeling, in his second attempt, emerging to teach the world -- and our America -- something about the human heart, by delivering a true triumph of the will...only to be audited by the IRS for the charity matches he participated in, to raise $90,000 -- not a penny of which he kept -- for the U.S. World War 2 effort. In fact, Lewis, who, on principle, paid back the government the money he and his family had collected from welfare during harder days, watched the IRS swoop down and claim the $667 his mother left him in her will when she died in 1953. Maybe a formal apology should be issued. Un. Fucking. Believable. 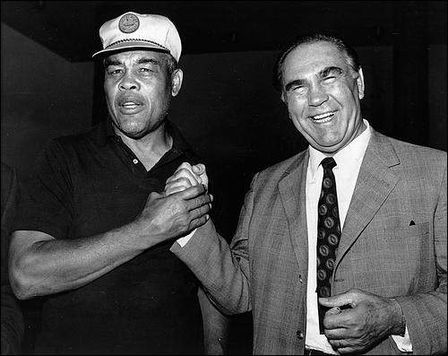 Joe Louis and Max Schmeling, circa 1971. The former Nazi showed more humanity than the IRS, helping to pay his former boxing foe's debts.

Back at the ballpark -- a final note on Yankee Stadium: you'd think that after the towers fell, we'd have learned something about the value of our hometown -- nay, national -- landmarks; instead, we once again sadly proven that we've learned nothing. Our ethos regarding history's lessons is fully threadbare -- indeed, bankrupted. We can evilly, ingeniously invent and inflate the price of anything and everything, whilst knowing the value of nothing, whatsoever.

File under: if you hitch a ride on a river boat...

A few years ago, I invited Kings of Convenience to shoot an impromptu, full-on run-and-gun session by the Hudson river -- specifically, aboard the retired lightship Frying Pan. Knowing that they liked playing empty offices at night, and weird, vacated spaces, the once-submerged floating light house, with its peeling paint and pickled specimens from when it was pulled from the bottom of the ocean seemed a perfect spot.

Simply put, it's a helluva thing to find yourself thousands of miles from that damn city you just can't ever quit, beginning your blog by contemplating the horror and destruction of buildings and people overseas, posting images of people contorting, falling (albeit, heroically) through the air, on this 9/10, the fourteenth anniversary of that very last day, before the very worst, first day...I've been invited to try cliff-diving for myself, and I'm hoping that somewhere in the moments-between-the-moments, during that space between falling and landing in the water and coming up for air, I'll learn something new about fear, gratitude, and letting go, and, well, (re-)embracing life? I could use it. Maybe we all could.