Hey there, fellow humans. I like you. I really do. We've had some brilliant times together over the years. Remember that sweet resort we hit up in Punta Cana? Or the night we saw Brian Wilson perform the Smile album in its entirety? Pretty epic, no? But listen, it's time for some hashtag real talk. Sometimes you do things that are pretty high on the dumbass spectrum. You use selfie sticks. You consume too many processed carbohydrates. You say 'ATM machine,' overlooking that the 'M' in 'ATM' stands for 'machine.' Crap like that.

But recently, your behavior has crossed the line, and as your friend, I feel the need -- nay, obligation -- to call you on it. So here we go: why on God's Green Earth are you not watching Halt and Catch Fire?

"Halt and Catch WHAT?" I hear you ask. Yeah, don't give me that. You may have never laid eyes on a single episode, but you know exactly what I'm talking about. But fine, I'll play your game. Halt and Catch Fire is an AMC period drama set in early-to-mid '80s Texas that follows a group of folks riding the wave of the personal computer revolution.

The next half-baked thing you're going to say is, "I'm not some programming nerd, so this ain't up my alley." Okay, read the next couple of lines slowly so I know you're grasping this. Remember how you got into Friday Night Lights (after I pressured the hell out of you), even though you don't know a lick about football? Same rules apply, dummies. This is a riveting character-driven show about complex people struggling to get their dreams off the ground. Your knowledge of motherboard electronics and BIOS code is irrelevant. Years ago I Forrest Gumped my way into an IBM job without knowing a thing about computers. A freakin' full-time job. If I can do that, then you're qualified enough to sit your ass down and watch a television show. Gawd.

Halt and Catch Fire recently ended its second season, no thanks to you, my fellow humans. And right now it's on the bubble for cancellation. Because it's a bad show? No, you cretins, because not enough people are watching it. In fact, season two only averaged 530,000 viewers a week. Yep, a mere 530,000. Do you know that's 27 times lower than the series average for Two and a Half Men? Let's take a second to let those numbers sink in, shall we? Jeez, I swear I can barely look at you right now.

Have you checked out the cast? Lee Pace absolutely crushes it as visionary sales guru Joe MacMillan. Remember his sweet-as-pie pie-maker character in Pushing Daisies? Well he's nothing like that in Halt and Catch Fire. Why? Because Lee's a kick-ass actor, you blockheads. There's also the brilliant Kerry Bishé and Scoot McNairy, who Argoed the hell out of things in Ben Affleck's Oscar-winning Argo. And -- not that you deserved it -- the show's even got veteran character actor Toby Huss on its g-darn roster. Freakin' Stumpy from HBO's Carnivàle! (Another genius series you never got around to.) 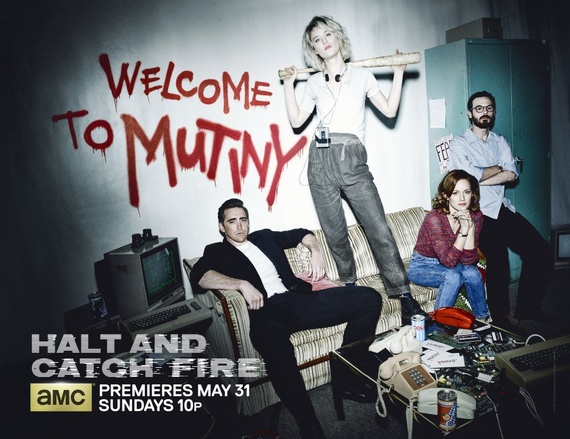 Just look at this season two promo pic. It's like eight shades of badass. Why is the blonde girl holding a bat? I know the answer, but screw it, I'm not going to tell you. Her character's name is Cameron, by the way -- not that you care. And she's awesome. Also, why is 'Welcome to Mutiny' spray-painted on a living room wall? There's gotta be a crazy story behind that. Rest assured, there totally is, and I'm not saying jack about it because 1) spoilers and 2) I'm mad at you. Fortunately, there's a simple way to get these answers: just watch the flippin' show. Radical concept, no? If I was a tween, I'd insert a facepalm emoji right here.

Anyhow, fellow humans, we're bros and all, so it's not like I'm trying to write you off here. But seriously, you've got some bona fide explaining to do on this one. Look, I'll even make it easy for you. Below is a promo video for season one. It's pretty killer. Just click on the stupid play button, okay? Lord knows you're good at clicking on random crap.

And by the way, season two ends on a bit of a cliffhanger. So if your mindboggling apathy prevents more episodes from being produced, so help me I'm going to pull up your laptop's browsing history and e-mail it to your parents.