As a huge fan of Leigh Bardugo's Grisha trilogy, I was more than a little excited to read her latest book, Six of Crows. The new series takes place in the same world as the Grisha books but is set in a different location and time frame.

Six of Crows works to further establish Bardugo as a phenomenal writer who has made her name as a master of fantasy.

I asked Bardugo a few questions about Six of Crows, her reading habits and surprising facts about her life.

Q&A With Leigh Bardugo, Author of Six of Crows 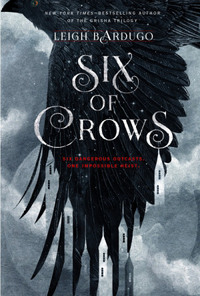 Six of Crows is set in same world as the Grisha trilogy but in the future. What's happened since the end of Ruin and Rising and the beginning of SoC?

LB: The world is still reeling from the repercussions of the Ravkan civil war and Ravka has begun to try to rebuild. But Six of Crows follows a new group of characters and focuses on a country that only played a small role in the trilogy.

Kerch is basically the anti-Ravka--prosperous, modern, cosmopolitan, a trading superpower with a thriving criminal underworld. While everyone else has been wasting time and treasure on wars, Kerch stayed neutral and prospered.

Are there any heist movies or books that helped to inspire the story?

LB: Definitely Oceans 11. Definitely not Oceans 12. I watched a lot of heist and con movies and plenty of episodes of Leverage. It's pretty enjoyable as research goes, and useful because there are certain narrative expectations that go along with a heist. But the tricks you get to pull in a visual medium just aren't the same when it comes to a novel, and I think that's especially true when it comes to heists and cons.

What actors would you cast as your SoC characters?

LB: When I was first working on Six of Crows, I saw this glorious picture of Jospeh Gordon-Levitt working a suit and leather gloves and I thought "KAZ." But some readers have cast Cillian Murphy and I'm not mad at that either.

A reader made a beautiful trailer for the book with Nidhi Sunil as Inej. Before that, Neelam Johal was the closest to how I'd pictured Inej. If anyone wants to see all of my character inspiration pics, they're on my Six of Crows Pinterest board. (Whenever I'm trying to keep myself from reading reviews, I go to pinterest. I do a lot of pinning.)

I appreciated how SoC focused on more non-magical characters. What was it like writing their stories vs the Grisha?

LB: Honestly, there are a lot of rules governing the magic in my world so it didn't feel radically different. And sometimes I think focusing on non-magical characters makes the magic of the world feel that much more real. It's just one more thing everyone is dealing with--like the weather. Cloudy with a chance of shit blowing up.

What is your most re-read book?

LB: When I was a kid it was probably a tie between The Princess Bride and Stephen King's novella, "Rita Hayworth and the Shawshank Redemption."

What would readers be surprised to learn about you?

LB: I once swam naked in Oliver Stone's pool. He wasn't home.

Six of Crows is available in bookstores and online September 29th.