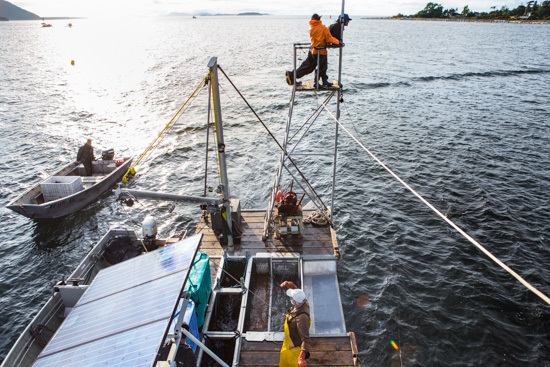 "In my heart, I'm more about butchering chickens and filleting fish," Riley Starks of Nettle Farm on Lummi Island, Washington told us the last time we visited.

We told the story about the chicken butchering some time ago and now its time to finish the tale about this farmer, forager and fisher who supplies fresh product to some of the finest restaurants in the Pacific Northwest.

The story picks up in the late afternoon of our last visit with a drive to Legoe Bay wearing rain gear loaned by Riley. Needless to say, we didn't come prepared for a wet boat ride out into the rough bay as the setting sun was bringing a chill to the island...but to experience the ancient Salish Tribe art of reefnet fishing, that's where we found ourselves, cameras and notebooks in hand. 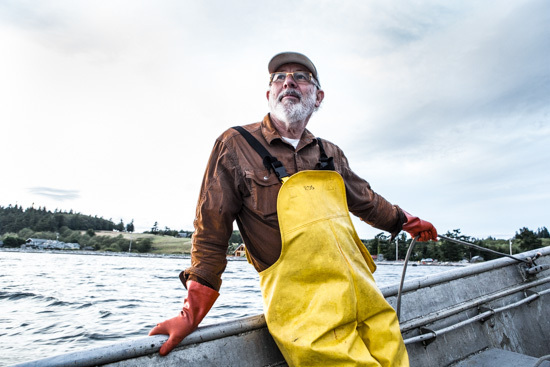 "The reefnet salmon fishery is a kind of specialized fishery," Riley explains. "This is the only place it's done in the world."

Operating four of the 11 allowed permits for reefnet fishing, Riley and his partners operate the Lummi Island Wild Cooperative. Begun in 2001, the Cooperative works the Bay for the responsible harvesting of wild salmon from July 20th till mid-October.

"Sockeye are our primary catch, but we also catch chums, or keta, and silvers, or coho. Every other year, we will get pinks as well. This year we bought fish from all of the reefnet operators which was possible by buying a second tender that could carry as much salmon as the entire fleet could catch in a day."

Replacing the cedar canoes and cedar nets that were used by the Salish Tribe, modern reef net fishing uses anchored metal platforms. One of these was our destination for the wet ride in the metal dinghy. As we clambered aboard the moving platform, the crew of three had already been hard at work for the entire day. 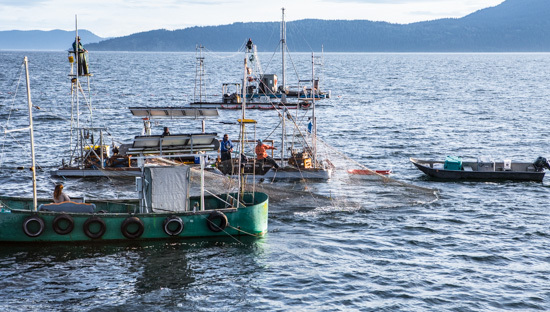 Each reefnet "gear," as Riley called it, consists of two platforms. Anchored but still unsteady in the chop, a large net is strung between the platforms with its open end pointed into the flood tide. Suspended from the net are plastic ribbons to mimic the eel grass beds found on the bottom of the Bay.

From a metal tower one of the crew stays fixated on the moving water between the platforms, watching for the current to bring fish into the mouth of the net.

When the current obliges, the watcher in the tower shouts out and the platforms spring to life with an amazing whir, clank and buzz of electric motors and pulleys. The equipment quickly draws in the net...and disconcertedly when experienced the first time, also draws the two platforms together. The trapped fish are lifted in the net and quickly put into a netted well open to the current, where they are sorted for appropriate size and species. 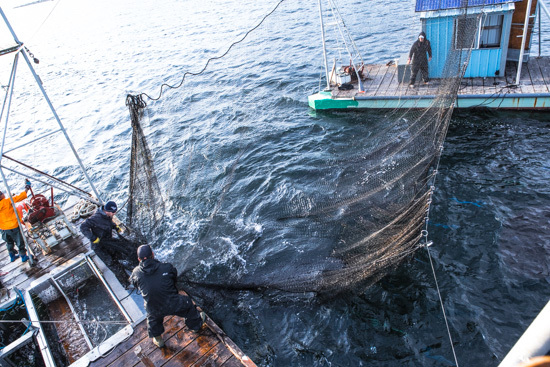 "Through our methods, the fish to be harvested are quickly bled and put onto ice till they are processed late in the day. This provides chefs with the freshest, most flavorful catch," Riley tells us while the crew is expertly doing just that to the fish that are to be kept. The rest are quickly released back to the wild with minimal damage or trauma.

Amazingly the deafening, mechanical squall of the equipment is produced without expending any fossil fuels. Since 2007, the platforms have been powered exclusively by the sun through a partnership with Alpha Energy, a major supplier of solar panels and with Itech, another local company.

Paralleling his other outreach program on chicken slaughtering, Riley and the Cooperative also sponsor a reefnet fishing program for chefs. Chefs in Raingear brings chefs out to the platforms to connect them to the harvesting and processing of wild salmon. By giving chefs an understanding of the source of their menu items, they also become the intermediary to connect their customers to the source of their food...a value growing in importance at all levels in the sustainable foods movement. 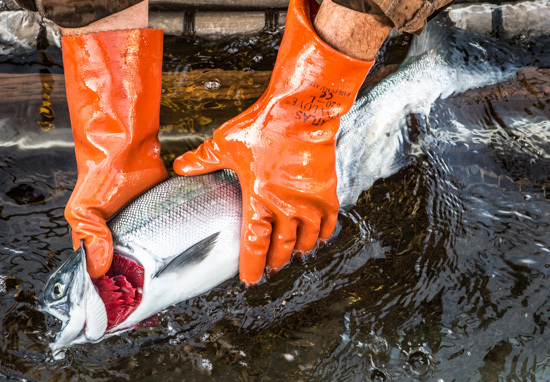 "Our fish end up in some fine restaurants including The Willows Inn, the HerbFarm and Cedarbrook Lodge's Copperleaf Restaurant."

Riley is justifiably proud of this multi-faceted operation.

"We are preserving an ancient tradition with a modern sensibility about sustainability and reverence for the sea life we catch," he tells us.

Since we were there last, some fairly major developments have occurred for the Lummi Island Wild Cooperative. Yvon Chouinard, owner of Patagonia visited last January in search of salmon for his new business, Patagonia Provisions. He brought his creative team and they liked what they saw. 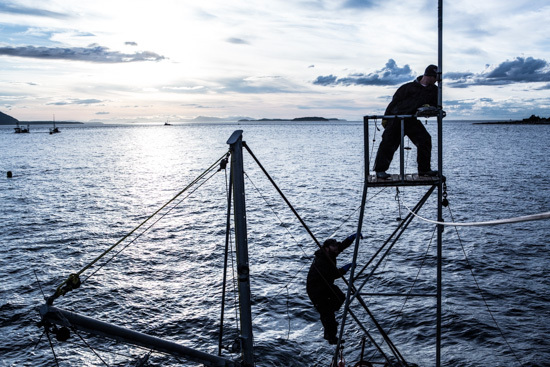 In August, the Patagonia team returned to fish with the Lummi Islanders and purchased nearly 100,000 lbs of pink salmon to be pouched and sold alongside their other products. In September, they brought their film crew back. Farm League Productions will be producing a documentary on the source of their provisions which will include Lummi Island Wild.

"We believe that we will be brought forward as the last best hope for commercially fishing salmon in the Salish Sea," Riley tells us proudly. "So reefnetting is not only here to stay, but may be the future of fishing."

Consistent with his respect for the chickens he breeds and slaughters as recounted in our earlier story, we are fully convinced that this sustainable approach casts a wide net of benefits: tastier, more nutritious foods, a connectivity with the sea, a connectivity between harvesters, chefs and diners and the ability to preserve the experience for generations to come.