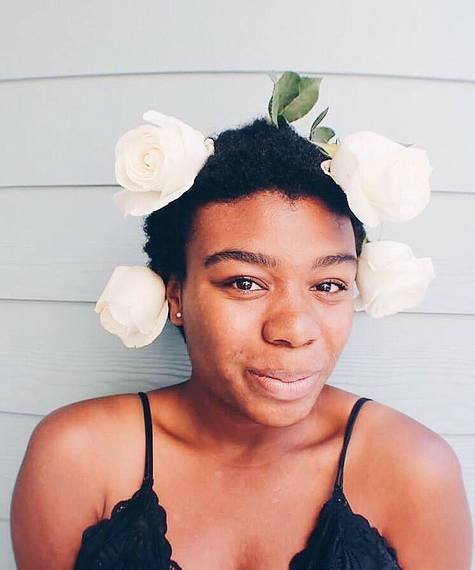 It's hard to put into words the significance a woman's hair often symbolizes in her life. I've always understood this. However, I think I understood it most four months ago when I held the scissors to my head and cut my hair to expose my natural texture for the first time in my adult life.

There are few experiences that I can say prompted such an odd mix of fear and liberty like that of choosing to go natural. A few months before my big chop I began the process of discovering who I was authentically. As I grew further in this process going natural seemed inevitable. Unfortunately though, I was always too terrified to entertain the thought. I had cut my permed hair to a pixie twice before but going natural felt different. It had struck me odd (and still does) that even in our modern society being a woman and cutting your hair can be scary. The fear doubled over when I knew that my haircut would expose a fro and I would have to wear that look in a culture that celebrates straight hair.

So I had a few fears when I choose to go natural. I want to share what I found was true and what was not.

What I Thought Would Happen:

I thought I would be less feminine.

When I cut my hair I created a video entitled Gender and the Big Chop. I explained in my video that the feminine aspect of hair was just a cultural construct, meaning it was not something created by nature but instead something society creates. Even knowing this though, the thought of being "too masculine" scared me. It was such a foolish fear but I was afraid that people might mistaken me for a man. After the chop though, I learned that this really wasn't the case! I still had a feminine figure and even if someone did mistaken me for a man (which still hasn't happened) that doesn't make me any less of a woman!

I thought I would feel ugly.

Only once before, when I was just entering high school, had I wanted to go natural. My peers and family members talked me out of it. The reasons they gave me ranged from "It will look bad" to "It won't suit your head shape." For a long time after that I neglected the idea of going natural because I thought it would make me undesirable, not only to others, but to myself. This couldn't have been further from the truth. When I held the scissors to my head and cut off that first chunk I wanted to cry. However, as I continued to cut more I started to smile and after I had showered and looked at myself in the mirror I couldn't help but laugh! I had never felt more beautiful!

I thought I would be ridiculed.

A few years ago I found the cutest blue dress at a thrift store. The top part of the dress had a flap that was a cross between a sailor necktie and a bow. On the first day I the wore dress I asked a peer "Do you like it?" He only snickered. When I asked why, he laughed and he told me that "he probably shouldn't say." I pressed him, "No, tell me why!" Finally he said, "I just thought you look like a slave or a maid." Needless to say I shattered when I realized that the dress did have a uniform element to it. I didn't wear it again but I always had this idea when I mad a choice about my appearance. 'Will this make me look like a slave?' This was a fear that crossed over to my choice to go natural. I had heard stories of girls who were told their natural hair was 'slave hair.' Thankfully though, I still haven't had that experience. I also realized that comparing my natural hair to that of slaves was an insult that exposed the small mindedness of the person who gave it rather than my actual reality.

My big chop was liberating.

Going natural has been the most liberating experience. Beyond the fact that I no longer have to worry about my roots or when I should perm next, there is also this feeling as if I was hiding under this persona of who I was meant to be and I finally feel like me! After my big chop I had a few friends who had also gone natural who described feeling the same way. This feeling was probably the best thing about going natural.

Contrary to my fear of insults I received so many compliments on my hair after the big chop. I even received a few hugs! More than I had realized, many women noted my decision as a courageous one and the encouragement I received was abundant! I even had a friend tell me I inspired her to do her big chop as well!

I found it easier to be who I am.

As I stated earlier, it's hard to put into words the significance a woman's hair often symbolizes in her life. The freedom I experienced from going natural made me feel freer to experience other aspects of who I am. Going natural was an important decision that I do not regret! My hair is a part of who I really am and I'm glad I discovered the unexpected beauty of going natural.