Once there was a girl who floated through life feeling as though she had been drugged by sadness. She often wore a smile for others, but underneath the mask was a sea of pain. One day her state of sadness gripped her in a most unyielding chokehold as she sat in her car in a busy parking lot, feeling as though she had become a prisoner to hopelessness. In that moment, it would have been a death sentence if she had attempted to drive. She sobbed into her steering wheel, feeling her cold tears greet her hands one-by-one, similarly to the way he had pecked away at her self-esteem and sense of dignity -- accusation by accusation, insult by insult, and sleepless night by sleepless night.

The hole in her self-esteem had not formed spontaneously. It happened one dagger at a time, and she learned that the blade got sharper and the cut went deeper each time she returned to him once more. Alone in a parking lot, surrounded by passing strangers who were oblivious to her state of personal catastrophe, she felt as though she was trapped inside of a horror movie, desperate to find the "pause" button. But, there was no button to be found, no lifeline to phone and no one was coming to sweep in and save her from this nightmare.

That girl was me. 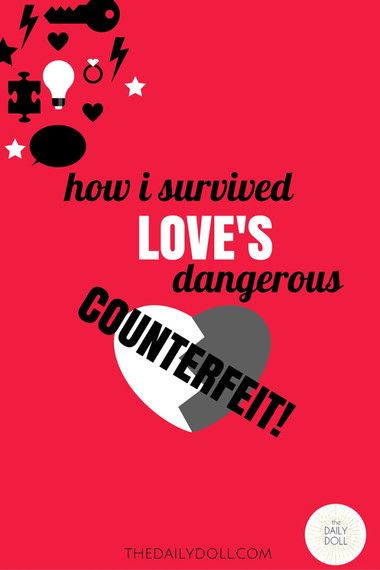 The Darkness That Once Stretched On For Miles...

There was a time the story would not have read so tragic. In fact, in the beginning, I convinced myself it was magic. The earliest indications of odd behavior began with him showing up at my apartment late at night and unannounced. He'd bring flowers and my favorite wine, claiming his "big feelings" wouldn't allow him to eject me from his mind. It was easy to romanticize it. I had always valued my privacy and independence, but I suppose in those early moments I valued my desire to be so overwhelmingly desired even more.

Before long, there began the paranoid questions, always partnered with that famous look of suspicion in his eyes. Eventually, it progressed to him grabbing my hand in anger, which led to my fingernail painfully dangling from its bed. "It was an accident," of course. He was remorseful, apologetic and vomiting with excuses as he gently wiped my tears and attempted to make me laugh by nicknaming me "gimp."

He was always strategic that way -- throwing humor into the scenario in order to distract me from the reality of the absolute cave of devastation I was stepping further into. Not long after, I found myself branded with a carpet burn on my forearm from him pulling me across the floor when in a fit of rage. Then came the holes in my wall. He went to war against anything which stole a solitary second of my attention from him. He was even resentful of my homework.

Most of the abuse was verbal. Once he rattled my car keys in my face as I attempted to escape another one of his seemingly never-ending and mocking rants. He turned to me and, staring deeply into my eyes, released a sadistic chuckle and said, "Now, that sucks."

I remember thinking there was an absence of light in his eyes. There appeared to be little more than a hypnotizing darkness which seemed to stretch on for miles. Then there was the time he purposely put his foot in front of my tire as I tried to drive away. It was clear he wanted to be injured. He hobbled on one foot in hopes that I'd feel pity for him, turn my car around and stay. He wore his swollen toe like a badge of honor. He gobbled it up like Thanksgiving dinner. I could almost smell the nauseating gloat.

Every episode was always followed by something poetically explosive. He'd often stage the most romantic scenes, make vows of forever and promises of safekeeping. He wrote songs for me and sang them with tears in his eyes. It was a roller coaster. It was an apocalypse. It was a seductive cycle of being force-fed abusive verbal concoctions which seemed to have been formulated in the plexus of hell's darkest dungeons, always followed by a tonic of exhilarating flattery as exalting as the heavens. My self-esteem was sinking in quicksand.

It's easy to judge, isn't it? It's easy to say, "Man, What was wrong with that girl? I would never tolerate behavior like that." Trust me, I now feel so far from the person in that relationship that I find myself judging my former self.

We often judge each other's messes until our egos' appetites are satisfied, until we feel superior and perhaps until we are convinced that maybe our own life isn't so much of a mess after all. When we judge, though, we are only fooling ourselves. My story is how I acted out through my pain. If you cannot relate, perhaps you have a history of doing something else with yours.

No heroin addict on the planet ever concocted a plan to become such. Do you think anybody ever says, "I know what I want to do with my life! I'm going to wallow in a state of ruin! I'm going to become addicted to this drug and live a life of shame and regret." It doesn't happen that way. It happens one compromise at a time. It happens with every step one makes in the opposite direction of their truth and value. It's seductive. It's trickery. The abuser, the drug, or the vice finds their victim's every shred of vulnerability and plays it like their favorite instrument. It's confusing. It's poisonous. It drains one's energy to such a degree that they almost stop caring about the nightmare ending.

It wasn't until I formed an unbreakable union with the reality of my worth that the willingness to tolerate another second of the misery was just... gone. I knew another compromise would never be made. He could have made extreme efforts to retaliate, quoted poetry that put Oscar Wilde to shame, or jumped up and down like a circus clown, but I wasn't going to budge because I had become rooted in the reality of love for myself and for life. The spell was broken because I made a decision with a determination stronger than cement. The only thing that changed was my mind.

Love doesn't provoke you to sob in a corner. It doesn't put a fist through your wall. It doesn't desire to shatter any part of you - not your phone, your windows, your ambitions, your self-worth or any of your other relationships. It has no desire to isolate you. It doesn't hack into your email account. It doesn't steal your keys for the purpose of forcing you to stay and endure further misery. It doesn't mock you as you cry. 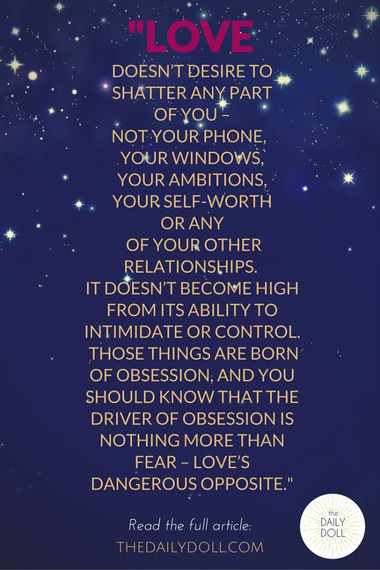 It doesn't violate your privacy. It doesn't stay up into the wee hours of the night scouring every shred of information on your computer. It doesn't rummage through your drawers in search of a reason to incriminate you. It doesn't spit in your face. It doesn't slander your name or even threaten to. It doesn't become high from its ability to intimidate or control you. It doesn't provoke you to curl into a ball, and it doesn't leave your heart on the floor. Those things are born of obsession and you should know that the driver of obsession is nothing more than fear - love's illusive and dangerous opposite.

What Will You Say?

If someone treats you this way and tries to convince you it's love, you better run as fast as you can in the other direction. Possessiveness has absolutely nothing to do with love. If you see yourself in any aspect of this tale, allow my story to be your lifeboat. Take my hand and step on. Don't hesitate. The time is not a month from now, after another chip has been dented into your self-esteem or after the next excuse. It's not after the next humiliating episode. It's now. Today.

Find your misery's expiration date, and you will blossom into something you never imagined possible. Fill yourself up with the celebration of you, and your confidence and sense of self will expand like a balloon. You have nothing of value to lose, but you have the responsibility of your own life to spare. One day, you are going to have to face your truth. You're going to have to answer the question, "Did I honor you?"

What will you say?

The original version of this by Lacey Johnson was published on The Daily Doll.

If you enjoyed this article by Lacey Johnson, you may also enjoy Love?.