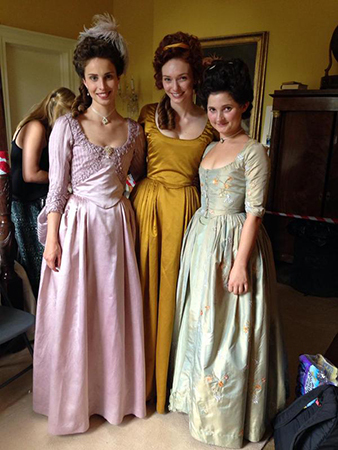 I'm so delighted to have had the chance to interview a number of the fabulous actors who are starring in the BBC show Poldark, an 18th-century British drama based on the first two Poldark novels by Winston Graham. (Poldark aired in the U.S. on PBS). Here I continue these interviews in a Q&A with the lovely Ruby Bentall, who plays Verity Poldark, a charming, strong, smart, and highly capable young woman, trapped by her spinster status.

Ruby is busy filming the second season of Poldark, so I'm especially grateful for her time in answering my questions! Also, if you're in the UK, be sure to set a calendar reminder to watch Ruby in ITV's Jekyll and Hyde, a 10-part action-adventure drama based on Robert Louis Stevenson's story, The Strange Case of Dr. Jekyll and Mr. Hyde, premiering on October 25!

Q: The name Ruby is near and dear to me, as it's the name of the main character in my first set of books. How did you get the name Ruby? Are you named for someone?

A: My name comes from my mum's Aunty Ruby. She lived to see me born and sounds like the most bonkers of women. My middle name is Jean, which was after both my grandmothers.

Q: I know you started filming Poldark's second season in September, and are going to be shooting through sometime in April. How has the filming been going so far this year? Any surprises?

A: So far I have only done two scenes, but I think it is going well. The beginning of a job is always the most chaotic as everyone is getting used to everything, and trying to sort out the kinks. We have a (mostly) new crew and production team, so it should calm down soon. Filming in Bristol should be much easier, as it's less moving around and more indoor stuff, so we are less dependent on the weather. 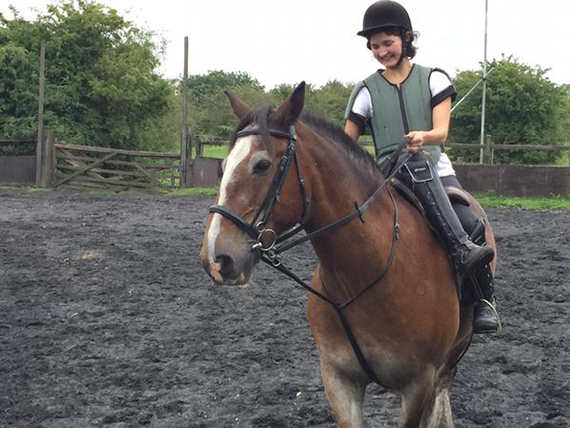 Q: Have you read the Poldark books? How did you prepare for the role originally, and did you do any additional preparation for season two?

A: I have read the first four books. I read the first two this year and have just finished the next two. Reading the books was very helpful in preparing for the role, as you get your character's inner monologue and other people's thoughts on them. I did a bit of research also into women of that class's education and expectations of life. I have done a few period dramas and have always loved history, so felt like I knew quite a bit about the world, but I have not played someone of Verity's class for a while and didn't know quite what was expected of a woman if she didn't marry.

I love all that sort of stuff. I wasn't particularly good at school so always found essay writing hard, so I didn't do that well at English or history, even though I enjoyed it. It's one of the things I love most about acting, that I get to do research and read books, but it's just for me and I don't have to write about it.

Q: You all had great weather in Cornwall for filming season one -- you were, I read, able to swim every day and go on long walks. How is it for season two?

A: Last year's weather was amazing in Cornwall. This year was a little more raining but I still walked lots; however, I was too much of a wuss to swim. I paddled a lot. I went for a lovely four-hour coastal walk from Portreath to Portowan. 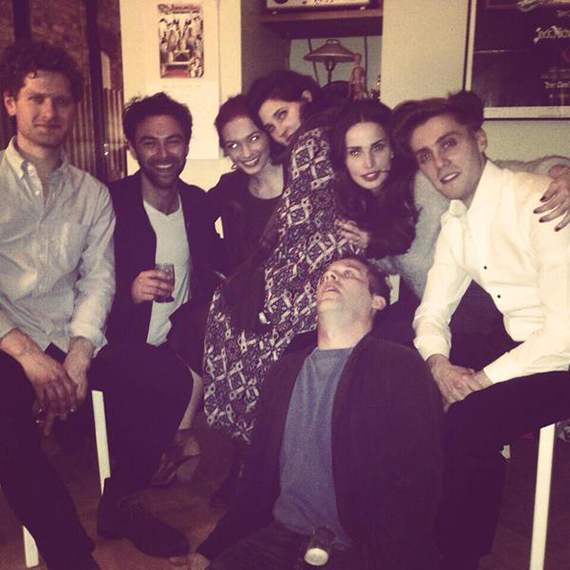 Ruby with the cast of Poldark.

Q: Verity's life is severely constrained by expectations and circumstance. If you could write Verity into an alternate Poldark universe, what storylines would you give her? Anything and everything is possible!

A: I have never thought about this but last year I wore this cape and massive hat with a feather, and the boys (Kyle [Soller] and Jack [Farthing]) used to say I looked like Puss in Boots, and I would do an impression of Antonio Banderas, so maybe Verity could become some badass sword fighter.

Q: The other day I had this brilliant realization. I've decided George Warleggen [one of Poldark's antagonists] is Draco Malfoy, which would, I suppose, make Ross Poldark Harry Potter. In this scenario, who would Verity be?

A: I guess Verity would be Peter Pettigrew before he went to the bad side, sort of looked over and used.

Q: Your parents were both actors. Did they encourage or discourage acting for you?

A: I think my parents were worried when I said I wanted to be an actress, but they also understood what that feeling is like. Maybe if I had shone at anything at school they would have encouraged me to try that, but it has been the only thing I have ever wanted to do.

I was a bit poorly when I was younger and in between hospital trips, because my mum had my other siblings to look after, sometimes my dad, who was doing Taming of the Shrew at the RSC [Royal Shakespeare Company], used to have to take me to work. I would stand in the wings and be made a great fuss of by the other actors and watch them all and I thought, I have to work here when I'm older. As a child all I wanted to do was be in Shakespeare play at the RSC (pretty pretentious haha). 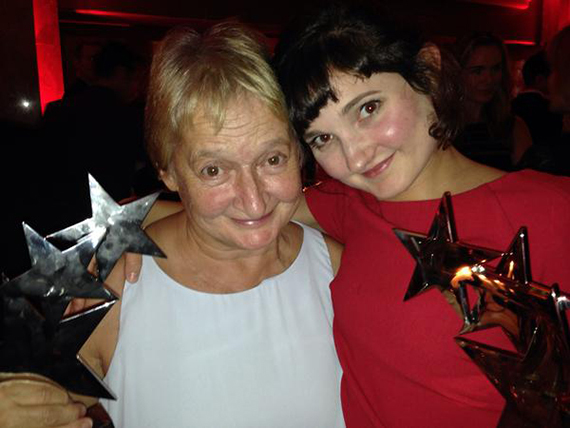 Ruby with her mom, Janine Duvitski.

Q: What would be some of your ideal roles? Is there a particular genre you'd like to try?

A: I still have never done any Shakespeare or classical theatre and I am desperate to. I would also love to do something modern. I have not done anything contemporary since 2011. It's getting a bit ridiculous.

Q: You've been acting for a long time now. Do you ever feel the desire to take a break and try something else? What might you like to try? Whether something within the industry (directing? writing?) or outside it completely.

A: I have only been acting since I was about eighteen. I couldn't imagine doing anything else. I don't think there is anything else I could do. I would not like to direct, I would be one of those terrible directors who can't help line reading the actors their lines, because I would just want to be doing their parts. Also I don't cope well under stress. I sometimes think about writing just to keep my mind active when I'm not working, but I don't think I would be good enough. 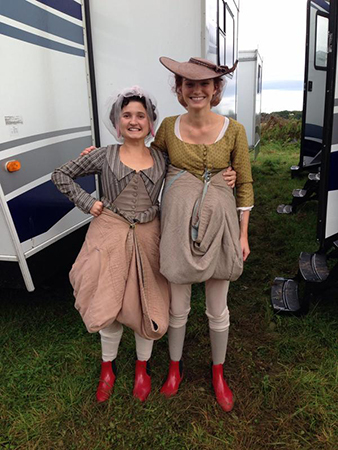 Q: You've said: "I always play stupid people who are very sweet. I'm often cast as the idiot -- I don't know why! You start getting a complex." Are you enjoying the break from playing stupid? Do you think you've broken free from the typecast?

A: Yes, one of the things I've loved most about playing Verity is that she is bright. It has been so nice. My next part, Jekyll and Hyde, which starts on the 25th of October, also is not an idiot; she is odd but not dumb. It's weird, in the last few years I've started playing adults, having played teenagers for most of my career. I don't know whether I like that or not!

Q: How would you describe your personality?

A: My personality! That is hard, I guess, like everyone, it's a mix. I can be bossy, I hope kind, quite confident, and silly.

Q: What do you like to do in your time off?

A: Read, dance around the house, I go to the theatre a lot, see my friends and family.

Q: What do you want your life to look like in five years?

A: Lots more work, maybe a lead in something, classical theatre, a bloke and a few babies. So, not much!

Q: What makes you happy?

A: My family, friends, and working. 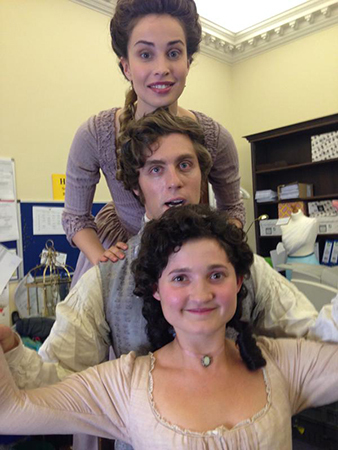 Thank you so much for your time, Ruby! Enjoy the rest of the filming of Poldark, and best wishes with Jekyll and Hyde and all your other endeavors!