On October 10, artists and engineers at All Power Labs, an artist work space in an industrial area of Berkeley, California, built and tested wood-chip-powered gasifiers and biochar makers as part of the Global Work Party sponsored by 350.org to take actions aimed at knocking the carbon dioxide concentration in the atmosphere back down to 350 ppm.

The artists at All Power Labs took a skillset for building large kinetic sculptures for the Burning Man celebration and converted it to producing independent, low carbon power. While the rest of society may be content to wait for the oil to run out before they start thinking about alternatives, All Power Labs kicked into gear when the city cut off their electricity for building code violations ten years ago. Spark plug Jim Mason responded by jumping into gasifier development and construction, chipping up old shipping pallets and construction waste to keep the lights on and the artists working.

The basic technology to gasify wood was developed during WWII by individuals who wanted to keep driving in the face of gasoline rationing, but it was always a finicky process, dependent on the time-consuming preparation of fuel into dry, one inch cubes of wood. What Jim Mason and his crew of Steampunks and Burners have done is to optimize the recovery of thermal energy -- producing a gasifier that runs on plain woodchips.

Using 21st century desktop manufacturing technologies like a computer guided plasma cutter, they perform what Mason calls "DIY power hacking." Computer modeling of combustion processes remains such a complex problem, that it is faster and easier to just cut new parts out of metal and try them in fast build and test cycles. The design advances quickly because all the information is open source, and anyone can participate and offer improvements. People can be authors of their own power systems similar to the way that desktop publishing and the Internet created the information revolution.

All Power Labs now sells what it calls the "Gasifier Experimenters Kit" or GEK. They also offer a Biochar Experimenters Kit -- biochar is a natural byproduct of gasification. On 10-10-10, about 50 GEK and BEK customers were on hand for a workshop to gain hands-on experience in construction, testing and modification of the machines. One part of the crew had stayed up until 2:30am the night before making two kinds of biochar that would be tested in a nearby community garden.

Biochar is a charcoal-based soil amendment that can dramatically increase plant growth. Biochar also sequesters carbon because plants absorb carbon dioxide from the atmosphere as they grow. If you burn a plant or let it rot or compost, all the CO2 returns to the atmosphere. But if you bake it and burn only the gas that comes out of it, you are left with charcoal that lasts for hundreds to thousands of years without breaking down, effectively sequestering carbon from the atmosphere.

Jim Fournier, CEO of Biochar Engineering Corporation, told the 10-10-10 work party that biochar is one of the only ways we have to actually remove carbon from the atmosphere and soon we are going to feel a lot of urgency to do that. Events like the floods in Pakistan, fires in Russian and the recent extreme heat in Los Angeles are just a taste of what's in store for us. Historically, our atmosphere has had less than 300ppm of CO2. We may go to 450ppm or higher before we are able to get off of coal and oil. Because it takes about 100 years for natural processes to remove CO2 from the atmosphere, we have to find ways to help nature along. Biochar is one of those ways.

Fournier said that one ppm of atmospheric CO2 is roughly equivalent to 3 gigatons (Gt) of carbon and that biochar could remove at most 2 Gt per year. So even with help from biochar, we can only remove about a half of a ppm of CO2 from our atmosphere annually. We have dug ourselves into a very deep hole. It is past time to grab shovels and start digging ourselves back out.

On the morning of 10-10-10 we delivered two barrels of biochar to the community garden. I described my own experiments with biochar and cautioned the gardeners that because fresh biochar can act like raw compost, in the first year after adding biochar to soil it is important to add plenty of nitrogen as well -- urine being my preferred source. Immediately someone produced a stack of drink cups, and we all trooped off to the bathroom to fill the cups with liquid gold in true DIY spirit.

Kelpie Wilson works as the Communications Editor for the International Biochar Initiative, a non-profit organization that supports the community of people working to implement biochar systems. 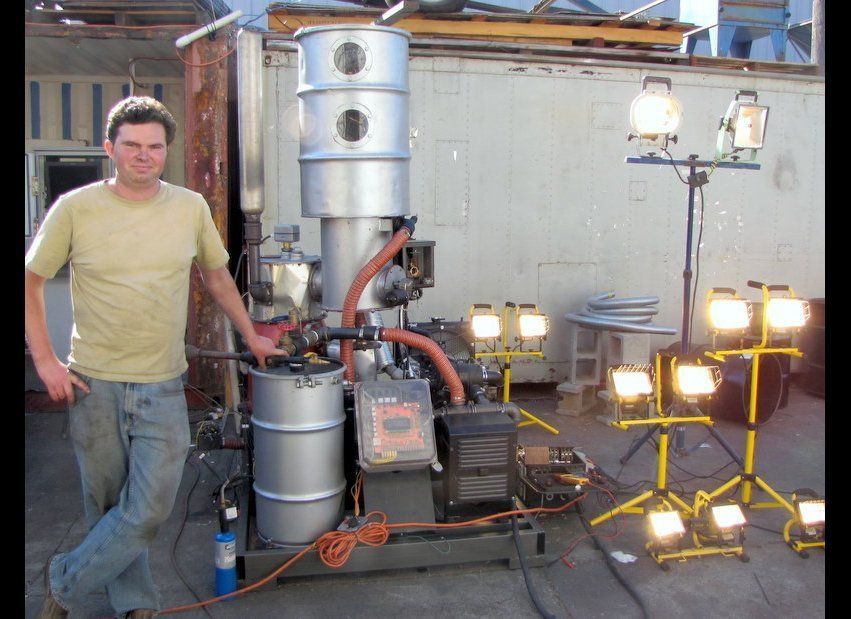 1 / 13
Power pallet hums along
Chief Scientist Bear Kaufman with the GEK Power Pallet -- a 10kw generator powered by wood chips. The only emissions are the exhaust from the gas burning in the 18 hp Kubota engine.