I was in la Place de La Republique yesterday afternoon, November 29th, with several thousand people. The Statue of the Republic is covered with flowers and candles to commemorate the victims of the terrorist attacks of November 13th. The monument was also surrounded by pairs of shoes, including a pair from the Pope, to symbolize the climate march which was supposed to take place. 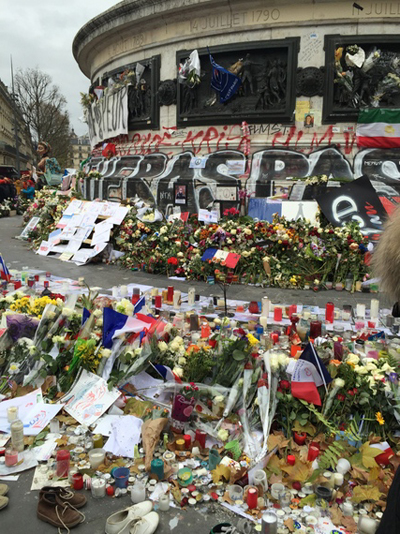 The Statue of the Republic covered in flowers, and surrounded by shoes.

This mixture was reflected in the crowds: some were there to mourn, others had gathered to raise awareness of climate change and call for world leaders to take action, for the defense of the planet, the climate and democracy. There were grassroots climate activists, students, families, children. There were mimes, a twenty-foot-tall papier mache puppet of Marianne -- the female allegory of liberty, one breast bared. Groups of activists sat cross-legged on the chilly ground, eating vegetarian lunches. Some protesters were masked or wore balaclavas. Perhaps because marches in Paris are banned under the new State of Emergency Laws.

There were climate marches taking place all over the world this weekend. But the Paris People's Climate March, scheduled to take place yesterday, was cancelled as are all public demonstrations during the next three months. Christmas markets and other social and religious events are allowed to go ahead however -- it seems that groups of people only grow dangerous "when they have a political point to make."

At around one thirty activists began to walk slowly round the square, holding banners, and singing: 'Si on ne marche pas, ca ne vas pas marcher' -- if we don't march, it won't work -- and 'l'etat d'urgence est le climat' -- the state of emergency is the climate. Ranks of police were drawn up in rows, closing off the square -- waiting, watching, carrying batons and riot shields. 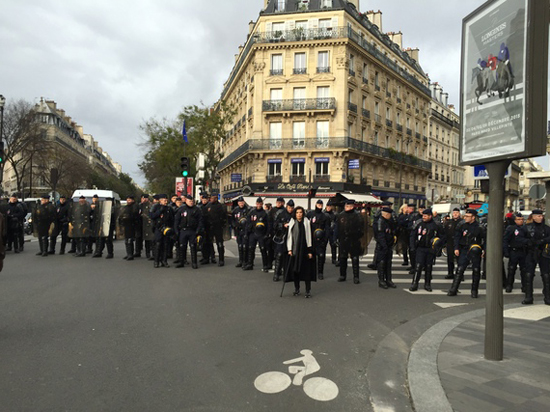 I left la Place de la Republique at around two. Shortly after, the crowd was teargassed by police. Some newspapers, including TIME, the Telegraph, and the Guardian report that the protesters provoked the police by charging them, or throwing shoes and bottles. The Guardian claims that the peaceful climate gathering was 'hijacked' by masked anti-capitalists and anarchists.

While I was there, I saw no provocation from protesters, masked or not. Later that afternoon I spoke with other NGOs at COP21, who had been there and seen the scuffle. They were unequivocal that the provocation hadn't come from the climate protesters. One said that when the police threw the first teargas, it missed protesters; the wind blew the gas onto police on the other side of the square. Then, he went on, the gassed police retaliated with their own round of tear gas canisters.

Police arrested 208 people during the protest of which 174 were kept in custody. They took many away in a bus. Others were detained in a makeshift pen created by ranks of riot officers and police vans.

In the early evening French President Francois Hollande, President Barack Obama and Paris Mayor Anne Hildago went to lay flowers at the Bataclan, the concert hall where on November 13th, terrorists opened fire on the audience. The cavalcade went down streets surrounding the Bataclan and La Place de la Republique, which by then had been cleared of protesters and closed off by police.

The French government's ban on demonstrations has forced civil society to get creative: yesterday morning, before going to La Place de la Republique, I took part in a 'human chain:' 10,000 people linked arms forming a chain that stretched over the streets of Paris, from Place de la Nation to la Republic. From Metro station to Metro station each section of the chain represented different areas of concern. Justice and the rule of law, the environment... I stood in the section that asked, 'who are the culprits?' As it was not a march, the chain was not in violation of the Emergency Laws, and the protesters were left largely in peace. Those in the Place de la Republic were not so lucky.

Following the horrific November 13th Paris terrorist attacks, which killed 130 people, the French government declared a state of emergency for 12 days, which was then extended for three months, dating from November 26th. What is deeply disturbing is that France has written to the Secretary General of the Council of Europe, making an official request to suspend their obligations under the European Convention on Human Rights because the country's 'state of emergency' is "likely to necessitate exemption from some of the rights guaranteed... due to public danger that threatens the life of a nation.' The French government has derogated the ECHR. Article 15 of the European Convention permits derogations in times of war or other public emergencies that threaten the life of the nation, to the extent required by the exigencies of the situation. In other words, restrictions to liberty must be proportionate to the threat.

Article 15 derogations have been challenged in the European Court of Human Rights, where the Court has clarified that a public emergency must be "an exceptional situation of crisis or emergency which afflicts the whole population and constitutes a threat to the organized life of the community of which the community is composed".

The state of emergency laws allow the French government to impose house arrest without authorization from a judge, conduct searches without a judicial warrant and seize any computer files it finds, and block websites deemed to glorify terrorism without prior judicial authorization. According to Radio France Internationale since the state of emergency was initiated there have been 1,616 searches of premises, 211 arrests, 161 people charged and 293 weapons seized. Human Rights Watch was among the first organizations to sound the alarm, stating that 'these powers interfere with the rights to liberty, security, freedom of movement, privacy, and freedoms of association and expression.' "The French government should keep people safe and bring those responsible for the horrific attacks to justice, but it also has a duty to protect people's freedom and rights, and not to discriminate against any segment of the population," said Izza Leghtas, Western Europe researcher at Human Rights Watch. 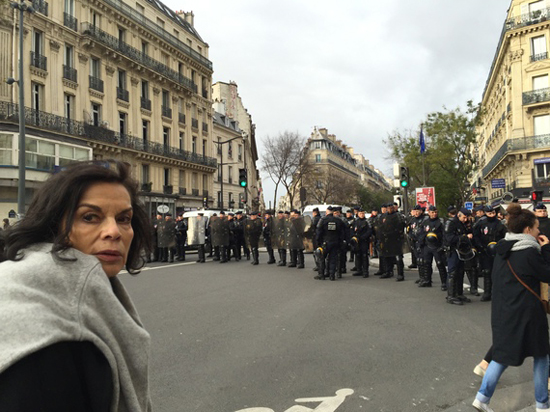 Bianca Jagger in front of the police cordon

On November 27th, in a pre-emptive move, the French government used the state-of-emergency laws to confine 24 climate activists under a compulsory order of residence, or assignation a la residence. Not all their locations are known but according to a lawyer representing one of the climate protesters, six people have been placed under house arrest in Rens, two in the Paris region, two in Rouen. The protesters are confined to their homes between 8 pm and 6 am. At other times they may leave the house but they are to be accompanied at all times by no fewer than three plainclothes police. Three times a day, they must sign in at the police commissariat.

Many people in France are concerned that the government is using the uncertainty and fear created by the attacks to institute draconian laws. Governments often justify excessive security measures, claiming that they are critical to maintain national security and that the people they are targeting are the terrorists; in this case the 'salauds' who massacred 130 people on November 13th. Unfortunately, they are also been used against climate protesters.

The State of Emergency is old legislation which has its origins in the Algerian war in the 1950s. It has been pulled out of the cupboard, dusted off and modified, to apply to twenty first century terrorism. Under Article 16 of the Constitution of the Fifth Republic of France a state of emergency can issue the President with sweeping powers, enabling them to take "any measures required" in the event that the "institutions of the Republic, the independence of the nation, the integrity of its territory or the fulfillment of its international commitments are gravely and immediately threatened and the regular functioning of the constitutional public authorities is interrupted." This power was first used on April 23rd, 1961 to contain a military coup in Algeria and quell calls for Algerian independence: to protect colonial rule.

It is cause for concern that France, with its proud identity as a bastion of civil liberties, is now joining a dubious list of governments that use security as a justification to cut down on individual rights. Like Rousseau, "I prefer liberty with danger to peace with slavery." The French Republic's motto is Liberté, égalité, fraternité. Civil liberties and freedom of expression are enshrined in French law. The right to peaceably assemble was one of the Republic's founding principles, set out in the 1789 Declaration of the Rights of Man and of the Citizen, one of the first charters of human liberties, which was later incorporated into the current French Constitution.

I am proud to be participating at the UNFCCC climate conference COP21, here in Paris, to show my solidarity with French people. My thoughts and prayers are with those who lost their lives in the horrific terror attacks of November 13th, and with their loved ones. But I am very disturbed by the draconian measures being taken by the French government.

I first came to Paris from Nicaragua as a young girl, with a scholarship to study Political Science. It was here that I discovered the meaning of liberty, equality, the rule of law, habeas corpus - concepts I had only dreamed about in Nicaragua. French philosophers from the 18th Century like Voltaire and Rousseau deeply influenced my view of the world.I hope that President Hollande will restore France's obligations under the European Convention on Human Rights and that these measures will be just a fleeting, authoritarian parenthesis during his Presidency. As the French political philosopher Montesquieu said: 'There is no crueller tyranny than that which is perpetrated under the shield of the law and in the name of justice.' 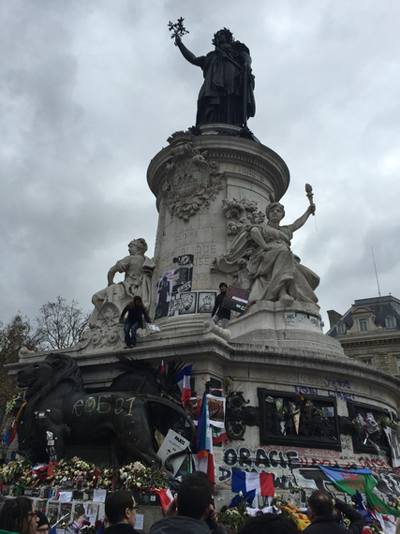 Climate protesters climb on the Statue of the Republic