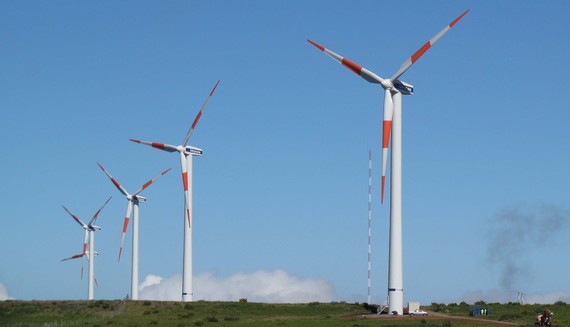 But the narrative has now changed. Plummeting costs for renewable energy technologies are making a global energy transition not only possible, but actually less expensive than the alternative.

We already know the world's renewable energy resources are abundant, eternal and have the potential to fully meet global energy needs while reducing emissions and mitigating climate change. What many do not yet realize however, is that renewable energy technologies are increasingly beating both fossil fuels and nuclear energy on costs. While some renewable energy sources -- hydropower, geothermal and some forms of modern biomass -- have been broadly competitive with fossil fuels and nuclear energy for some time, solar photovoltaics (PV) and onshore wind energy have also now emerged as cost-competitive options.

In Australia, a country with the world's fourth largest coal reserves, producing onshore wind energy was 14 percent cheaper than new coal and 18 per cent cheaper than new gas in 2013. In Egypt, a recent tender for onshore wind generated electricity resulted in bids as low as USD 4 cents per kilowatt hour, compared to USD 7-19 cents for fossil power plants, including externalities.

Solar module prices have dropped 75 percent since 2009, and the more we build the less expensive it gets. With every doubling of cumulative installed capacity, prices fall by some 20 per cent due to economies of scale and technology improvements. For example, a German PV rooftop system cost roughly €14,000/kW in 1990. At the end of last year the price was less than one tenth that amount at €1,300/kW.

As the cost of renewables continue to fall, the cost of producing power with nuclear and fossil fuels is on the rise.

While the average global cost of onshore wind and solar PV fell 2.4 percent and 5.4 percent respectively in the past six months, the cost of producing electricity in a new gas or coal-fired power plant increased in all regions of the world.

According to Bloomberg New Energy Finance, nuclear power costs, on average, more than three times as much to produce as wind, solar PV and small hydro in the Americas. In Europe, the Middle East and Africa (EMEA), energy from a new coal fired plant is 15 percent more expensive and energy from a new gas-fired power plant is 30 percent more expensive than onshore wind. And the list goes on.

The cost argument is not lost on the private sector. More and more companies are opting for renewables, including some of the biggest in the world such as Apple, IKEA, Amazon, Wal-Mart, and Lego. They do so on the basis that it is that it is an economically prudent thing to do.

We have reached the crucial tipping point where the renewable energy option not only makes sense environmentally and socially, but also economically. This is causing a dramatic shift towards renewable energy worldwide, with renewable power capacity accounting for more than half of capacity additions in the global power sector since 2011.

But renewable energy deployment must be accelerated, and quickly if we are to limit global temperature rise to 2°C. Governments must address the most severe disincentives and energy market distortions, by improving policies to level the playing field between fossil fuels and nuclear power on the one hand, and renewable energy on the other. The world currently subsidizes fossil fuels to the tune of more than US$500 billion a year, dwarfing support for renewable energy by a factor of five.

World leaders will arrive in Paris on November 30 for the final round of climate negotiations before adopting what is expected to be an historic climate agreement. They will do so emboldened by the knowledge that the massive deployment of renewable energy technologies is a solution whose time has come.

Renewable energy is now not just the most effective means, but also the most affordable means of addressing the climate crisis. Cost can no longer be used as an excuse to delay action.