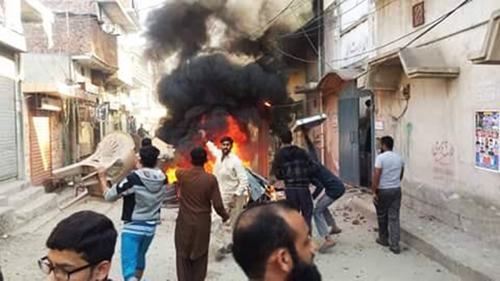 In a recent incident in Pakistan, an Ahmadi mosque has been burnt and members of their community have been arrested on charges of blasphemy. This by stretch of imagination is not a new incident as Pakistan has witnessed a flurry of such incidents in the near past.

In the last few years, Christian colonies have been attacked, people have been lynched and burnt and many a times cases have been registered against some members of minority communities ( in some cases Muslims also) accusing them of blasphemy.

And even more nauseating than the actual barbaric act are the aftermaths. The reactions often range from insensitivity, trivialization, denial to outright shameless justification. Many are not worried and often try to point out towards infamous Gujarat riots in India or similar communal incidents of violence in other parts of the world to deflect and trivialize our homegrown religious bigotry.

According to some ( and I happen to personally know a few or at least used to know ), this is not cause for concern. According to them "Situation would have been far worse" if majority was actually bigoted. I really do not know what inhuman threshold we have in mind which has to be crossed before we actually acknowledge that there is a problem with our society's collective mindset. And by the way, all of this is occurring at the time, where many of Muslims are trying to defend Islam in the light of Paris attacks and the resulting negative spotlight.

Some would argue that Pakistan is coming out of extremism as evident by military's action against Taliban and Sunni militants. To a certain extent, I concur that military action against militants is a huge step forward. However, religious extremism has many facets and religious terrorism is just one of them. Terrorism is often conducted by a fringe and overwhelmingly perpetrators are non state actors. These can be identified and provided there is a political will and military capability, eliminated also.

What is more difficult to address is the general bigotry in ordinary population. It is this bigotry which manifests against minorities in violence whenever accusation of blasphemy is levied. This form of extremism is impossible to address through a military action as it is so widespread and actually perpetuated by ordinary and at times not even apparently religious people. Many a times such incidents do not even involve Madrassah students.

Some liberals keep on harping around the infamous blasphemy laws in Pakistan and naively assume that repealing them would solve the issue. Let me say it clearly: Blasphemy laws, though highly objectionable, are only a symptom. Yes these should be repealed but we need to address the real problem.

In fact in blasphemy cases, people have been even killed in the jail when their cases were in progress. Repealing the laws ( if such a repealing is successful) will only remove a symbol of religion's infusion with state; it will by no stretch of imagination prevent people from becoming violent. For that matter repealing these without addressing the real issue will cause people to become even more bigoted than they are now. In fact the law cannot be repealed through democratic ways in the first place until the major issue is tackled.

Lets not forget that laws, even if imposed through dictatorial ordinances can only be repealed through legislature. No party has the guts to do it and one of the main reasons is that unfortunately most of ordinary Pakistanis want these laws. These inhuman laws are the reflection of general Pakistani will and also an unfortunate symbol of extreme reverence of religion. Assuming that even privately a sizable number thinks that these laws are inhuman, they are completely impotent due to extreme reverence of religion and their inability to bring any counter argument to conservative religious scholars and Mullahs.

The real issue is NOT only the laws but general religious bigotry which is rampant in the society which in turn emanates from the mindset and the overall cultural set up of Pakistan. This cultural set up gives religion extreme reverence and cultivates an identity based on it, which is extraordinarily sensitive on all the religious matters. This reverence of religion and the resulting bigotry is primarily cultural though has state as its major patron. The issue is not restricted to the fusion of religion with state. State is one of the patrons of religion, but is not the sole determinant of its reverence.

The role of religion, particularly the sensitivity arising from it is chiefly coming from our childhood training during which religion is presented as something extremely venerable. A culture of not questioning it is imposed first at home and then later at the schools. The fusion of reverence along with its unquestionable status, cultivates a violent prone and bigotry ridden mindset.

It cultivates an atmosphere where a mob can actually get away with extremely violent acts in the name of religion. People even if they do not actually feel the anger, can still get violent to vent out their gutter instincts under the guise of religious honour knowing fully well that no one will be able to stop them. In fact we know that several times police and administration became a silent spectator when the mob was imposing their "justice" on the victims.

In longer run the solution is to actually desensitize people from religion And that cannot be done without cultivating a culture where religion can be critically discussed. Unless and until the educated of this country show collective courage and are ready to do that, frankly nothing can change.

But at least in the immediate run, a wide scale condemnation from the political elite as well as religious scholars is essential. Rather than condemnation, the reaction is simply either denial or to trivialize. Religious scholars hardly say a word or try to come up with a shameless justification of the mob behavior.

Frankly the elite and the affluent middle class have to play a role. The political elite which have historically shown impotence and tried to manipulate religious sensitivity to their advantage, have to muster up the courage and at least condemn such incidents. Political leaders and parties do not merely reflect public opinion but they are also a medium to engage and communicate with masses. It is their job to cultivate a narrative of tolerance and kindness towards minorities. Unfortunately in Pakistan, many times politicians have actually tried to inflame religious sentiments in one way or the other.

It is perhaps for people like Imran Khan ( the famous cricketer turned politician), to show some courage and speak as he now commands a sizable and manic support. I really do not understand what his slogan about "Naya Pakistan" (New Pakistan) is, if it does not try to address these grave issues.