Is he (she? it?) a big and kindly Other who created the world, likes to be worshiped, and talks back to people who pray?

Or is the Divine some kind of diffuse and universal Spirit who inhabits oceans and mud puddles, cockroaches and humans?

Or is God none of the above, but rather some undiscoverable thing that powers quarks and photons?

I don't know what God is like, or if God even is. But it does seem to me that Something is going on . . . out there? In here?

That makes me a Somethingist.

Somethingism is a stripped-down belief system for folks who believe in something - but haven't a clue what that Something might be. It's a brand new religion (religion?) 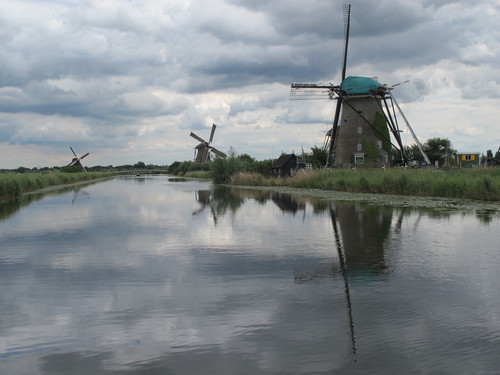 In Holland, a stripped-down belief system. Photo by Barbara Newhall

Washington Post columnist Sally Quinn is a fan (adherent?) of Somethingism. She quotes a bumper sticker that sums it up for her: "I Don't Know and You Don't Know Either."

Somethingism, It's a nice niche for those of us - count me in - who aren't at all sure what God is like.

Nearly a quarter of all Americans now check the box "None" when asked their religious affiliation. I wonder how many of those Nones would be happy, given the chance, to check a box labeled "Somethingist."

If you liked this post, you might like my book, "Wrestling with God: Stories of Doubt and Faith," in which I go looking for ... Something ... in the life stories of people of radically differing wisdom traditions and temperaments -- from atheist to Zoroastrian, and fundamentalist Christian to progressive Muslim.

Some thoughts on ethics at "Confessions of a Carnivore." Thoughts on family at "The Center of the Universe Lives at Our House."