By Playboy.com Staff
This article originally appeared on Playboy.com. 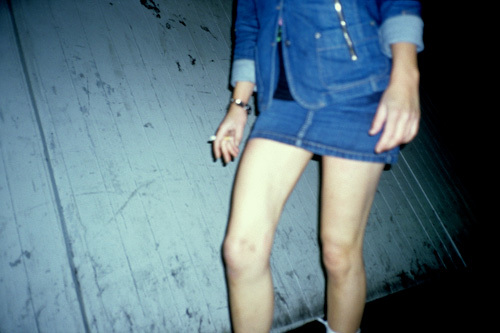 Most of our exposure to an escort's life is through one of the dozen crime investigation shows on television. Usually they're being killed as part of some psychopath's serial killing rampage and we never get a chance to ask them any questions. Today, we get our second special opportunity to hear from actual escorts when Reddit users ask about their first day of work. Peruse the link for raunchier posts.

1. NOT YOUR TYPICAL PANDA EXPRESS

It's been a long time since I did 'massage work', and I only did it for a few months. I was young, the place was brand new and it was the opening day. I turned up early and only one guy came that day, it was also his first time, which made it a lot easier, we were both pretty nervous but that seemed to comfort him.

We chatted as I showered him, he had kids, I'm pretty sure he had a wife too but maybe divorced, ex-army. He was really nice. We went into one of the rooms and started the massage. It was height of summer and it turned out the windows were broken in the room I was in and because we'd only just opened - no fans. It was alright at first, bit of warmth, but then once we started getting into other stuff we were both getting so hot and sticky. We finished off and we were both dripping with sweat, it was pretty grim. Luckily we both found it kinda funny and ignored it. He went for another shower and I looked in the mirror, all of my eye make-up had completely run down my face. He basically fucked a panda.

First day...I did a funeral. He didn't want his family to know he was gay till after the will was read and followed out. Four months later I went with the same guy to Thanksgiving Dinner and picked a fight after pie about how all he cared about was his stupid job and we "broke up." I never slept with my clients so I didn't make as much as some of the other girls. I mostly did events for gentlemen with party obligations who worked too much for a regular girlfriend. I ended up at a party once with this "bitch couple" that my client totally hated because they usually got drunk and fucked in the coatroom. She was a friend of mine and we worked for the same "company." Overall...if I wasn't a single mother I would do it again...it was fun and the money was good.

3. DOUBLING YOUR MONEY WITH AN OLD-FASHIONED

I was from a small town and really sheltered, but had lost both of my parents & my foster family kicked me out at 17. I stole some of her shit, pawned it and made my way to a greyhound bus that took me to a big-ish city. I found a job on Craigslist looking for women with an interest in massage, cash paid daily, no experience required. Awesome. This was in 2008. I had like 12 dollars left to my name.

I worked there a few months without ever touching any dudes genitals. I think they kept coming back because I'm pretty and do actually give a decent massage. Anyway, a few months in I figured out that a hand job basically doubled my income. So I popped some of those off.

Working at that studio was NUTS! I was hungry for money, so I'd work open to close 6 days a week. I became really popular & the boss said he'd never seen someone earn money like I did. I got to keep my tips and split the hourly rate 60/40 with the boss. I was clearing like 3k a week. I saw C list celebrities, super rich old dudes, athletes, everyone. One of my regulars was a cop. He came to see me and was like "don't come in tomorrow and tell no one I told you". Anyway, they got busted.

A girlfriend of mine and I worked together for a while, splitting hotel rooms and stuff. Now I'm back in school. I work part time at a real job that I like; I'm in school full time. I own my own home and my car is paid off. I live beneath my means and still have stacks of cash from the Jack shack days. I also have an unpaid internship that's going to be great for me when I'm done with school. Now, I have seven clients. They're all married dudes. Some I see weekly, some monthly. It's sort of like I just have seven part time, low maintenance boyfriends really. Oh, except they leave cash on the table.

This experience hasn't been traumatic for me at all. It's helped with my negotiating skills, it's made me more comfortable around people, and it's made me sharper and more aware. I know it's dumb, but I love it.

I replied to an ad on craigslist looking for sex for money. I was 19, and going thru a real self hating phase and was engaging in tons of high risk behavior (drugs). The gentleman was very straight to the point, he wanted me to come meet him at his place, which was in one of the most exclusive neighborhoods in the city so I agreed. Shortly after my arrival, he started questioning me on why I was there, and what my intentions were in the business. I was immediately freaked out and thought he had some sort of ulterior motive, but he then informed me he ran an 'agency' (aka he was a pimp!). He said if everything in the next hour went well, he'd love to have me aboard. This agency had a real hipster feel, he took all of our photos with the same white backdrop, asking all of us to wear something cute vs. something sexy. I ended up becoming the definition of a cliché; I was 'dating' the pimp within a few months. It ended with him being a truly great guy and really caring about me... he caught me getting high on heroin one morning and drove me to a detox. I was there for three weeks, and he brought me clean clothes and snacks when I was finally hungry again. He really wanted the best for me and wouldn't allow me to rejoin the agency once I was done with the detox. I think he and I both knew I wasn't done with the drugs yet, but he didn't want to enable me. I was too young and addicted to see the favor he was trying to do for me, so I ended up going independent. I joined the local escort message board clique. I could go on and on. I got clean (currently six years clean) and continued to be an escort, until I met my husband (married almost three years). Sometimes I miss it, but the happiness I've found in being loved for more than my sexual appeal outweighs any desire to go back to the lifestyle.

I was on Tinder a few months ago, and this guy and I had been casually chatting. Nothing overtly sexual. He told me how he hadn't dated in a while and was feeling bummed about his sister's upcoming wedding (he wasn't married, she was younger, etc). He maybe jokingly said, "at this point I'd be willing to pay for someone to go with me." It didn't immediately make me think I'd do it. After talking more, he seemed pretty sweet. I offered to go with him because I like weddings and I strangely enough like meeting parents. He put money in my uber account so I could safely get to and from the wedding. He paid for my dress. We met for the first time in person at the reception (he was in the wedding party for the ceremony). We acted like we were dating and even said we had met on Tinder (leaving out the convenient aspect that I was being paid to be there). We both had a great time. Nothing very sexual happened apart from holding hands, dancing, and a couple of light kisses for show. At the end of the night, he asked me to come home with him, but I respectfully declined. He paid me $200.

Pretty much, through my agency, I was pick of the pack since I'm a virgin and some guys are really into that. There are four girls at my club that remain virgins to cater to these guys because it's a pretty common fetish. I was nervous as hell, but I knew that I was chosen by that client specifically for my lack of experience (minus training), so there wasn't much point in hiding it.

All the girls were super supportive before I left, giving me lots of tips. I met up with a not totally unappealing, wealthy business type. Pretty typical client. I went to an event as his girlfriend, got a few drinks, ate a nice meal, made conversation. We actually had a lot of fun coming up with my back story on the way there. How we met, my name, etc. We went back to a hotel room and he wanted a dance. Granted. Then some dry humping and oral sex. Granted. He really, really got off on the fact it was my first time, and that he was my first client. Spent most of the night there - he didn't push the no penetrative sex rule. He ended up giving me $3000.

I was really wound up all the way home, and honestly, I'd never seen that much cash in my whole life. I'd heard other girls say they've done this, and I guess I couldn't help myself either because the second I got home I masturbated with the wad of cash in one hand because I was so turned on from the nights activities + money. I knew it wouldn't always be like that, but oh my god. It's been two years since then, and he's still a regular of mine. I haven't told him yet, but I'm pretty sure he'd love it.

7. NIGHTMARES TURN INTO A WORSHIP SERVICE

I put my ad up on a website. He replied. We set up a meeting and he paid for the room and got there first. I was so nervous. I imagined being arrested for prostitution, my picture in the paper. What would my family say? I imagined being choked to death, unable to scream. So many horrible thoughts. I regretted this. I shouldn't be doing this. This is horrible; karma is going to get me.

When he opened the door, he had this welcoming, warm smile. We began making out. And really all that happened after that was 45 minutes of being eaten out and less than one minute of sex at the end that I wished would have lasted longer. He offered extra money at the end.

I absolutely was expecting to feel degraded and used at the end of this. Instead, I felt like I had just been worshiped. We kept in touch for three years afterward. On the drive home, I said to myself, "and to think I've been doing this for free all this time."

More from Playboy.com:
Inside New York's Underground Lap Dance Parties
'Cam Girlz' Is the Rare (and Good) Exception to Most Sex Work Documentaries
Mistress Matisse Is Doing the Lord's Work on Behalf of Sex Workers