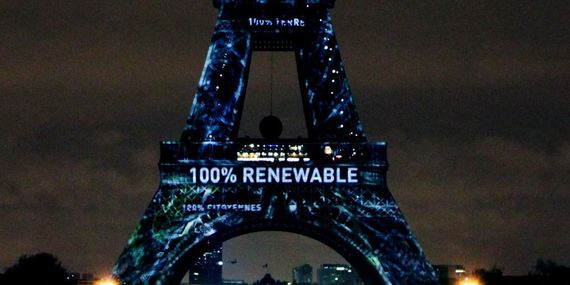 For the first time at any UN climate conference, renewable energy is taking center stage from now through "Energy Day" on December 7th. And for good reason.

Renewable energy, no longer the new kid on the block, is now capturing market share from fossil fuels and nuclear energy at an unprecedented rate. The world installed more renewable energy capacity over the past three years than nuclear and fossil fuels combined, disrupting the energy sector and the business case for conventional energy models.

Fact-based arguments and objective scientific evidence aren't given enough attention in the struggle to win the hearts and minds of decision makers and the public. Some of this may be chalked up to what academics refer to as "incumbents' inertia" in the face of technological change. Some point to more sinister motives by those who have the most to lose financially from a changing industry.

Whatever the cause may be, when it comes to climate change and renewable energy solutions, we must be guided by science and facts, coupled with a sense of urgency. And three facts speak for themselves:

1. Renewable systems are reliable, even at night and on windless days: One of the most common fallacies about renewable energy is that it cannot be relied upon to satisfy our electricity demand given that the sun does not always shine and the wind does not always blow. Cost- effective energy storage technologies, new generation batteries for example, are often mistakenly portrayed as the Holy Grail: sought by many, found by none.

This argument is not only incorrect, it misses the point entirely. Reliability is not a function of individual generation technologies, but a function of the electricity system as a whole. It is important to remember that "renewable energy" is not a single energy source, but roughly speaking six: solar, wind, biomass, geothermal, hydro, and ocean. Of these, only wind and solar are "variable;" the rest are capable of being dialed up or down when needed - "dispatchable" in industry parlance.

There are many ways of managing variable electricity technologies within the broader mix. This is hardly surprising given that grid operators have been dealing with variability since the birth of electricity distribution over one hundred years ago, for the simple reason that demand always varies.

2. "Baseload" is not essential: A second fallacy assumes that utility models favouring a steady "baseload" of electricity from nuclear and fossil fuels are the only way to ensure that when we flip the switch the lights come on. The fact is, nuclear and coal-fired power plants by definition provide baseload electricity because that is what they are designed to do; given the heavy upfront investment costs, these types of plants are designed to supply a lot of electricity, all the time, to ensure a decent return. In the case of nuclear power, they can only be turned on or off - you cannot have just a little nuclear power one day, and a lot the next. Moreover, when a nuclear plant goes down, the consequences are more dramatic than when a wind turbine goes off-line; blackouts and power failures occur.

Energy consumers do not need this massive baseload to be sure the lights will come on when we hit the switch. What we do need are power systems that can match supply and demand in a more concerted and flexible way. Flexibility is key.

3. The future will look different than the past: A third fallacy is the assumption that power systems must forever continue to rely on the century-old model whereby centralized utilities supply electricity to match demand from their passive consumers. Recent trends suggest the opposite will increasingly be the case. Renewables-based models allow individual households, communities and global companies to produce and manage their own electricity supply and demand, with the grid serving solely as back-up. "Smart" meters and appliances make this task all the easier. In future, having the ability to flexibly manage both supply and demand will create a system that utilizes the free resources provided by the sun and wind in the most effective way.

In some countries, the future is already here. Grid operators are managing shares of variable renewable energy that in some cases far exceed 20 per cent. Without relying on battery storage, renewables produced 38 per cent of Spain's electricity from January to October this year. 41 per cent of Danish electricity demand was met with wind (roughly 39 per cent) and solar (2 per cent) last year, and expectations are that this number will rise to nearly 90% in the next nine years. Solar and wind produced 22% of the electricity in Germany, the world's fourth largest economy, during the first half of this year.

The inescapable conclusion is that the transformation towards renewable power - by its very diversity and flexibility - is increasing the reliability, affordability and security of the power system, not diminishing it.

So after dispelling these fallacies, the question remains: how important is it that we find better storage solutions?

Announcements about improved storage technology are exciting, to be sure. Sales of storage batteries for solar PV systems are growing, and costs for storing electricity are coming down fast. But studies show that storage needs are minimal until renewables reach a very high share of the total amount of electricity generated. In the case of Germany, which has an interconnected system, a share of 90 per cent was achieved in some studies before storage solutions were needed.

And by the time we reach that scale of renewable energy deployment at a global level, fully competitive battery storage systems will most certainly be widely available. From that day on the world will be able to fully rely on renewable energy for our electricity, heating, cooling and transport needs.

In the meantime, grid stability, reliability and security of supply are essential. Fortunately renewable technologies are well-placed to deliver this.