As the Washington Post headlined in a July story, "Call off the bee-apocalypse: U.S. honeybee colonies hit a 20-year high." Now that the world entomological community is in general agreement that the United States and global honeybee population is not, and has never been, threatened with extinction by pesticides, the focus of advocacy concern has suddenly shifted to wild bees. 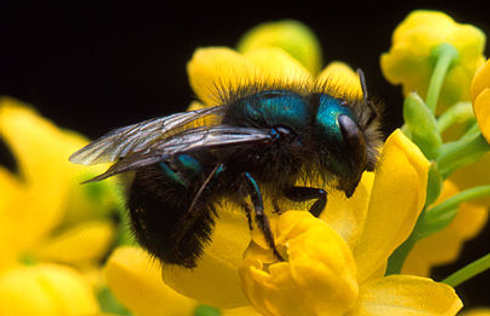 Why wild bees?
This refocusing of concern is intriguing because the wild bee population can't be monitored or as easily estimated as honeybees, so guesses of population numbers and health differ wildly, often based on computer models and/or whether industry or an organization or scientist has a preconceived agenda.

The latest data point in this changing narrative on the 'bee crisis' is the first assessment of the United States wild bee population published late last year in the Proceedings of the National Academy of Sciences. It's bracing conclusion: wild bees may be disappearing in California's Central Valley, the Midwest's corn belt, the Mississippi River Valley and other key farm regions.

Ins Koh, an environmental planning professor at the University of Vermont, led a research team that estimated that the mainland US wild bee population declined 23% between 2008 and 2013. They point out that the demand for pollination is sharply rising while their modeling estimates wild bee numbers are falling in some 39% of US croplands. Farmers, they say, could face increasing costs, which could set off a cascading set of events that could dangerously roil the nation's crop production.

Sounds potentially catastrophic. But it takes only a laymen's review of the article to see that the conclusions are little more than speculation, based on sketchy computer projections driven in part by the questionable assumptions of the researchers. The problem with research on wild bees, as noted above, is that there is no way to count them. They are wild, after all.

So what did Koh et. al do? They assembled fourteen people, identified without independent input, to review land use data culled from federal land databases. They were looking for such subjective information as the "quality" for nesting and feeding from flowers. They then collected their information, came up with formulas that gave it objective weights, and created a computer model to guess the relative abundance of bees in each of the 45 land use areas that they had identified.

So let's be clear about the science involved here: In their process of coming up with an analysis that led to the public issuing of hard statistical bee decline percentages, such as 23% and 39%, Koh and colleagues made at least five subjective assumptions-which databases to use; which "experts" to choose; what information to ask the experts to collect; how to weight their subjective findings to give them an objective gloss; and then formatting that data to create a computer model that would make a guesstimate based on the the estimated bee populations in every plot of crop land in the US.

That's not hard science; it's called Ouija board science. As Science 2.0 recently noted in its review of the study:

In other words, they created an academic model that would get them fired from every single company in existence for being wildly suspect and based on too many assumptions. ... The authors then claim the decline they don't know is happening must be due to pesticides, global warming and farmers.

These kinds of claims should sound sadly familiar. As recently as 2013, in a dramatic 2013 cover story, Time warned of "A World Without Bees," subtitled "The price we'll pay if we don't figure out what's killing the honeybee." 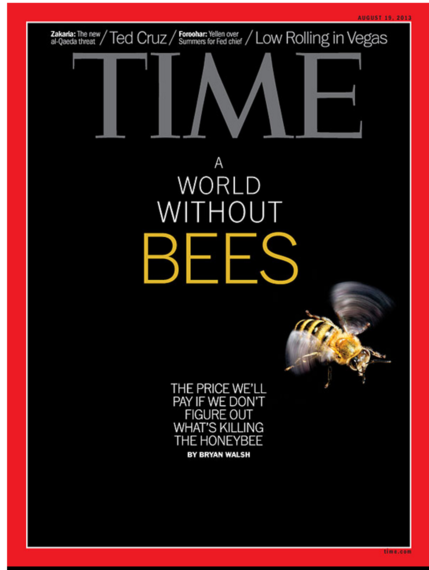 Its author argued that the class of agricultural pesticides know as neonicotinoids was killing the honeybee and that the planet would starve unless we banned these chemicals immediately. He said this because, he claimed, "1 in every 3 mouthfuls you'll eat today depends on bee pollination." In short: no bees, no food.

The science website that I edit, the Genetic Literacy Project (GLP), examined that 1-in-3 claim in a previous article--it's just not accurate. Soon after the Time article appeared, emerging facts about the health of the global bee population began changing our understanding about pollinators and food. Rather than a decline, the data show clearly growth in the number of commercial hives throughout the the world.

In America, after a sharp decline in bee health during the 1980s linked to various diseases, since neonicotinoids came into widespread in American agriculture in the mid 1990s, commercial honeybee numbers have held steady at the level of 2.4 to 2.6 million hives. They recently reached a two-decade high of 2.7 million--the exact opposite of the misleading narrative still being promoted by some advocacy groups.

Simply said, there is no honey bee crisis--even such environmental publications such as Grist, after it carefully reviewed the data, made a point of noting the "crisis" has been widely misreported.

But even as the empirical data underscoring the fact that world farming is not facing a beemageddon has strengthened, anti-pesticide activists have attempted to shift public focus away from commercial bees, which are more than holding their own, to wild bees. Bee health is an issue that resonates with concerned citizens: because our food supply is so dependent on bee pollination, the disappearance of wild bees would also necessarily impact our crop production. No wild bees, no food.

This transfigured narrative also offers its purveyors a unique ideological benefit: there are no reliable counts for wild bees populations, so any claim of imminent danger can stand unchallenged by the facts. But that narrative does not survive scrutiny either. In a groundbreaking study published in June in Nature Communications, 58 scientists from around the world found that the vast majority of wild bee species that they examined are prospering.

Activists insist wild bees are being killed by neonicotinoid insecticides. But as the research paper noted: "[T]he species that are the dominant crop pollinators are the most widespread and abundant species in agricultural landscapes in general." The variety of wild species that forage on commercial crops is limited, but in terms of population, those species are everywhere. They are by far the most commonly encountered type of wild bee. The study found that, in 99.7 percent of the cases, the wild bees that come into contact with crops (and neonics) are not in decline.

"Threatened species are rarely observed on crops," the authors concluded. So why would banning pesticides help preserve any particular wild bee species or wild bees in general? There is no generalized wild bee problem; there are some wild bees that are not fairing as well as others, and those species are not linked, directly or indirectly, to neonics or any particular pesticide. A solution to a wild bee problem depends on the particular species of concern. There's no one-size-fits-all fix.

In many cases a particular species faces hard times because it's being pushed out of its preferred habitat by changing land use patterns. If a new housing development goes up and kicks a particular type of bumblebee out of its home, another species might move in. It has nothing to do with chemicals sprayed on crops that they never even visit.

A team of entomologists, writing in 2012 in the Proceedings of the National Academy of Sciences, explained how this situation plays out in the real world. The authors found some declines in a few species of bumblebee, which scientists sometimes refer to as Bombus, the genus of bumblebee. They pointed out that it's an exaggeration to look at the decline of one type of bee and jump to the conclusion that wild bees in general are dying off.

Environmental change affects species differentially, creating "losers" that decline with increased human activity, but also "winners" that thrive in human-altered environments. ... Thus, the existence of a widespread crisis in pollinator declines, as often portrayed in the media and elsewhere, rests on data of limited taxonomic or geographic scope.

The team tried to remedy the situation by taking a closer look at a species-by-species level. Again, there was no reason for alarm.

Of 187 native species analyzed individually, only three declined steeply, all of these in the genus Bombus.

In fact, the problems of those few wild bumblebee species may in fact be caused by commercial beekeepers introducing deadly diseases.

Furthermore, Bombus may not be representative of the world's 442 other bee genera because they may have been impacted by recent pathogen introductions from managed Bombus colonies.

For example, the introduction of the nosema parasite from commercial bee populations was thought to have wiped out the rusty-patched bumblebee, which hadn't been seen on the East coast since 2009 and was presumed extinct. The bee recently made a comeback, having been spotted in a Virginia park about 50 miles from Washington, D.C. 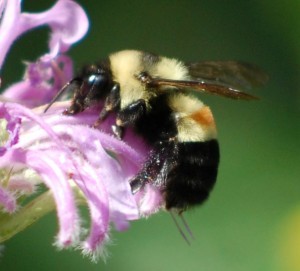 The situation is much the same in Europe. According to the best available studies, certain species of bumblebees that saw declines in the 1990s have rebounded in the past few years. At the same time, the species richness of other wild bees has increased significantly. In other words, nature tends to reach an equilibrium.

Some species of wild pollinators face challenges and must fight for their survival, which just happens to be true of all wild animals and insects. With respect to wild bees, however, the best available scientific evidence suggests that these creatures are extremely resilient.

There is some clarifying data on wild bee populations and agricultural productivity. The USDA keeps detailed statistics on all the most important crops pollinated by bees. Many factors can affect a crop's output, particularly the weather, but it's clear that yields are not decreasing and bee-pollinated crops have not fallen upon hard times.

Crops in which bee pollination is essential 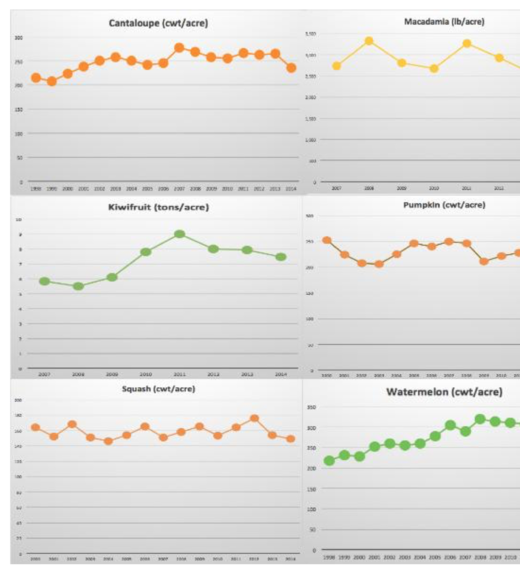 Crops in which bee pollination has great influence 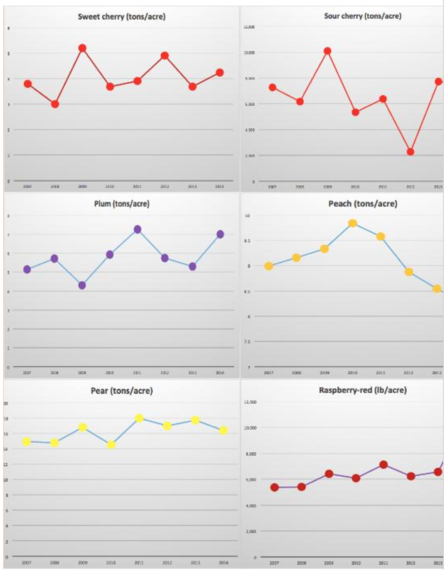 The lone exception is the peach, where bee pollination is important but not essential, which has seen declines in yield. But USDA's explanation of the situation has nothing to do with bees:

The California peach crop, accounting for 74 percent of the United States utilized peach production, is down 5 percent from 2013... Growers reported the drought situation remained a concern, however many of them were able to offset reduced irrigation district water deliveries by utilizing wells to pump groundwater.

California fields have been parched for the past four years, but even a record-breaking drought hasn't been enough to depress productivity. Since the beginning of the supposed bee crisis that began with Colony Collapse Disorder in 2006, farm productivity in the US has actually increased among America's bee-pollinated crops. Agriculture Secretary Tom Vilsack:

In the six years I have been secretary, we have seen a vigorous expansion of our agricultural sector. As much as an enterprise dependent on the forces of nature can be described as robust, American agriculture is robust and growing. Farms are more productive today than ever before.

Jon Entine, executive director of the Genetic Literacy Project, is a Senior Fellow at the World Food Center's Institute for Food and Agricultural Literacy, University of California-Davis. Follow @JonEntine on Twitter