Andalucia, the southern region of Spain, is famous for its pueblos blancos (white villages). There are over 800 municipalities in Andalucia, and each one can oversee several smaller villages and hamlets. They really are a feast for the eyes. Although I am British born, Spain has been my home as a photographer for the last two decades. In 1996 I fell in love with Southern Spain and co-founded the website www.andalucia.com. I have travelled extensively in Andalucia ever since, so let me show you five fabulously photogenic villages.

1. Casares in the province of Malaga

This is the picture postcard village of all picture postcards - the symmetry of the sugar-cube style houses and the beautiful rural setting with the contrasting backdrop of all the natural curves of nature. It will make any photographer want to capture the scene. As in many villages, an ancient fortress stands proud right on the top.

Early morning, late afternoon and evening shots will all reap photographic rewards, while in the spring Casares can be framed with lush green foliage, and summer with bougainvillea, and in the evening the street lights and sunsets, will enhance the scene.

2. Zahara de la Sierra in the province of Cadiz

Travelling through Andalucia by car, this is one of the most idyllic scenes, a white village with many cobbled streets, a castle on a rocky outcrop with one perfect white village below, and if that wasn't enough, a turquoise-toned reservoir. February is the almond blossom season, so if you are looking for an item in the foreground, the delicate pink blossom is always a winner. The night shots of the cobbled streets with the rooftops of church of Santa María de la Meza is a particularly attractive photograph. 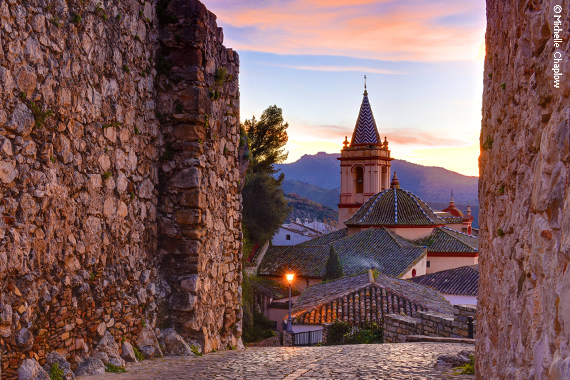 Just wander around Zahara de la Sierra with your camera in the narrow streets, and your eye and composition skills will frame the rest.

3. Montefrio in the province of Granada

Many years ago, in 1995, I was commissioned by a magazine to write a story on expats with an internet connection, and in the hill top village of Montefrio, way off the beaten track lived a hispanophile, author, translator and philosopher named Lawrence Bohme. It was that story that led me to this beautiful village for the very the first time.

Montefrio is seriously pretty. The symmetry and that diagonal line under the Iglesia de la Villa church, which was actually built of a nasrid castle, is just so photogenic. This is one of those beautifully proportioned villages that really come into its own when you view it from a distance. I also shot the front cover of the Vauxhall (GM) magazine of a new SUV which was brought down from London in a truck and placed in an olive grove with Montefrio as a backdrop. 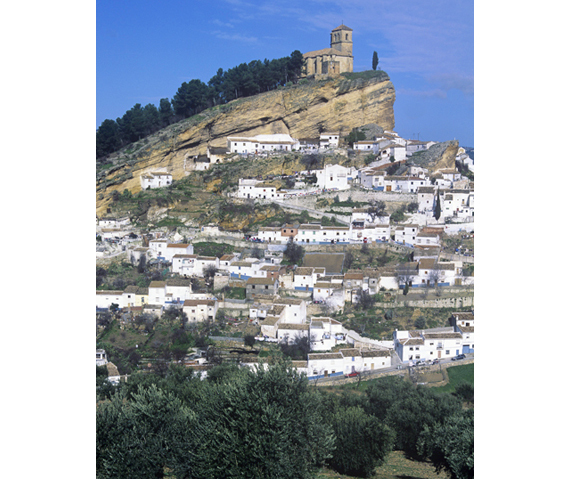 If you ever meet a film crew or a location scout, they will all know Montefrio (literally, cold mountain), but I can tell you the people of this village may live on the cold mountain, but they have a very warm heart.

4. Almonaster La Real in the province of Huelva

This village has a very famous mosque on the hill top dating back to the 10th century - the mosque was built on the ruins of a fifth-century Visigoth basilica, definitely worth climbing the steep hill for. Not only is the mosque impressive from the outside, but its interior is stunning. Walk through it and you will get panoramic views of the Sierra de Aracena. However the main reason is that from this mosque literally in the porchway you have a spectacular view to the village and a natural backdrop - a hillside covered with trees. 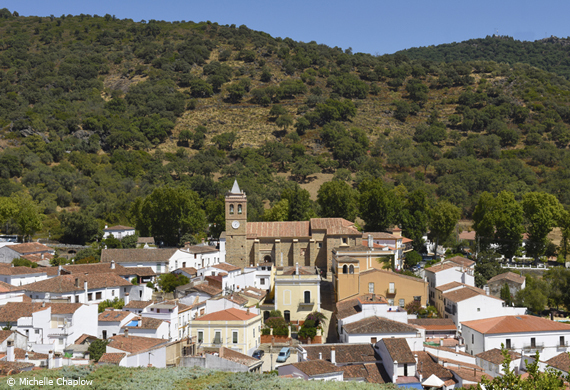 Once again, inside, just rambling around the cobbled streets of Almonaster la Real, there is a potential photo on every corner. The steep streets give really good angles - either looking up or looking down, both photography angles work well.

5. Zuheros in the province of Cordoba


The first time I saw Zuheros, I was so impressed with this town that I wrote to the village's mayor, congratulating him on how well maintained it was. I was teaching travel photography at the time and one of the students summed up the scene saying "This is as good as it gets". There are times when you arrive in a town and the light is just perfect and this was one of those says. This particular image was taken in February, you can see that I am a huge fan of the blossom and looking into the light, or contraluz as the Spanish say, enhances the blossom and leads your eye to the inanity of the Sierra Subbetica mountain range. 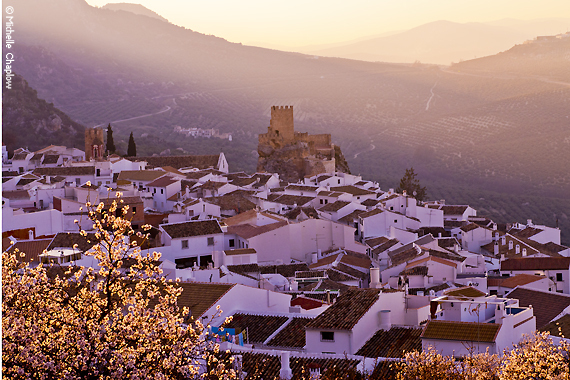 It is so difficult to choose just five fabulously photogenic villages - many, many more would make a perfect postcard, but these are the five that I would like to share with you today.

This is a beautiful region for landscape photography with the most wonderful natural light, and my advice for any photographer with over 1000 villages to choose from, would be to head on a road trip inland to the more remote parts of Andalucia. You can´t fail to take home some stunning shots.