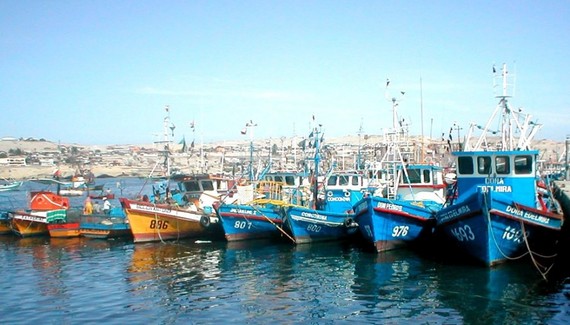 ImpactAlpha.com -- In a sign of healthy competition, not one but two private equity fund managers are gearing up to raise tens of millions of dollars apiece to bet on the recovery of coastal fishing industries and local communities in the developing world.

The Sustainable Ocean Fund plans a $50 million first close later this year, and ultimately intends to deploy $100 million across 10 to 15 investments in near-shore fishery investments in places like Belize, Bangladesh, and Madagascar. The fund manager, Althelia Ecosphere, last year raised nearly $120 million for its Althelia Climate Fund, which finances projects that generate revenues from sustainably certified products such as cocoa, coffee and wood.

At the same time, Encourage Capital is moving ahead with its strategy for recovering Chile's common hake fishery, which collapsed in the early 2000s. That plan, one of the six investment blueprints the New York firm recently published under a grant from the Rockefeller Foundation and Bloomberg Philanthropies, is priced at at least $17.5 million.

The Althelia and Encourage investment theses were both presented at the third annual Conservation Finance conference last week at Credit Suisse's New York offices. The embrace of wild fishery recovery by two fund managers shows that the huge global demand drivers as well as the investment opportunities are becoming better understood in what has long been considered a difficult and chaotic sector.

"It's striking that there is substantial capital, in the billions, being allocated to reviving forestry and yet there is little, if any, significant investment being applied into sustainable fisheries and ocean conservation," said Simon Dent, the former BNP Paribas banker who is launching the Sustainable Oceans Fund. The new fund, he said, "will allow us to direct meaningful investments to support sustainable fisheries over the long term, thereby accelerating the transition to a sustainable model."

The urgency of such investments became even clearer with new reports that the decline of global fisheries may be even steeper than was thought. Losses from fisheries mismanagement is estimated to be more than $2.2 trillion over the last 30 years.  Only about one-third of 66 major marine ecosystems have comprehensive management plans, according to Christian Severin of the Global Environmental Facility, which is coordinating a new Global Coastal Fisheries Initiative.

The new financing efforts rest on an essential insight: Even depleted fisheries can recover in nine years or less with proper management and incentives for fishermen and women.  That sets up an attractive investment proposition: recovering the health of the fisheries, counterintuitively, translates into dramatically higher, sustainable yields in later years.

A bio-economic model developed by researchers at two universities and the Environmental Defense Fund shows that with 10 years of sustainable management, as much as 79 percent of the world's fisheries could recover, resulting in $51 billion in increased annual profits. By 2050, the researchers will say at next week's SeaWeb Summit in Malta, millions  more tons of seafood could be harvested every year -- while still leaving significantly increased wild fish populations.

That initial dip and 10-year upswing resembles an investment pattern that is familiar even to those who know nothing about seafood. Venture capital portfolios often show poor apparent results early in their typically 10-year fund cycle, as capital is deployed and companies put it to work. The theory is that performance climbs toward the end of the fund's life as companies grow and head toward their exits.

As Jason Scott, managing partner at Encourage Capital, put it, "A fish recovery curve looks a lot like a J-curve in venture capital."

The outlines of Encourage's investment in the common hake (Merluccius gayi) are in the public domain via the firm's report on investable models for fishery improvements, both small-scale and industrial-sized. Scott said the grant-funded research had been essential to developing the plans, but that other investors are welcome to replicate them.

"We are going to try to execute this strategy," Scott said. "We think you could put $20-40 million to work to improve the hake fishery."

The 50-page "Merluza" strategy outlined in the public report forecasts equity returns of at least 16 percent and up to 35 percent. The initiative would include three components, combined into a single special-purpose investment vehicle. Fishing management improvements, like scientifically set catch limits, ensure that the productivity of the fishery improves over time. The funds would acquire 36 percent of the total fishing quota to reduce the pressure on fish stocks. And finally, the fund would buy companies, mainly old-line fishing businesses, such as dock and processing capacities, to upgrade hake processing and distribution business and also market jumbo squid products.

If all goes to plan, the increased yield would generate $104 million in additional income for 1,800 fishers across 12 communities, and deliver an additional 136 million legal servings of hake to the market each year.

"We think that is a good setup for a multi- asset class, multi-strategy vehicle, rather than just buying up a few assets here and there," Scott said, summing up the benefits:
"More fish, more income for fishers and more returns for investors."

Simon Dent, the former banker who is launching the Sustainable Oceans Fund, is betting on the recovery J-curve as well, along with reduced waste, shortened supply chains, improved access to markets and better-quality products. The fund, structured to deliver market-rate returns, will finance management improvements in fisheries, along with infrastructure and market access.

"These projects need longer term impact finance, rather than short-term grant funding, to help stakeholders make the transition to sustainable practices," Dent said in an email exchange. "This finance needs to be applied all along the chain - on the water as well as off, upstream and downstream."

As in its land-based investments, Althelia is stressing both that local stakeholders will participate in the investments and benefit sharing and that investments will have  measureable social and environmental impacts. Althelia's climate fund  finances projects that generate revenues from sustainably certified products such as cocoa, coffee and wood and also create carbon offset credits that can be sold in international markets.

Conservation International has provided initial funding to launch the Sustainable Ocean Fund and, along with Environmental Defense fund will provide scientific and technical expertise as strategic partners.

Agustin Silvani, Conservation International's vice president of conservation finance, said the environmental organization is supporting the fund to "serve as a proof-of-concept vehicle to catalyze further private investment in the space."

A robust deal pipeline is critical to the investment thesis. At a recent meeting in Belize, sustainable fisheries advocates hatched plans for an Artisanal Fisheries Finance Accelerator to help local projects prepare themselves for outside investment.

"In general there is a lack of sustainable finance mechanisms to fund small-scale, or artisanal, fisheries improvement," said Megan Arneson, acting executive director of 50in10, a nonprofit consortium. "There's no lack of interest from investors, but the fisheries aren't ready in the majority of cases -- too much risk, not enough organization."

Neither Encourage nor Althelia is planning to make investments in the U.S., despite the huge seafood market and growing demand for sustainably harvested fish.

"We think the impact and biomass uplift is greater in emerging markets," said Dent.