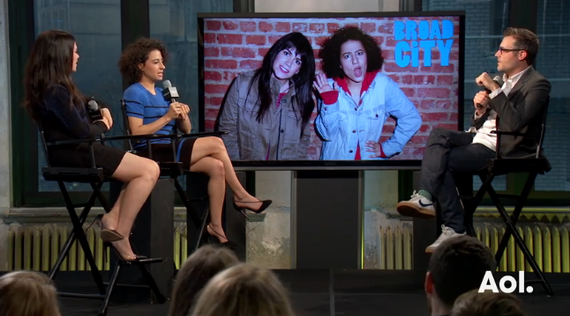 Earlier in the week, Abbi Jacobson and Ilana Glazer-the shows creators-stopped by 770 Broadway to do an interview at AOL's BUILD series, ahead of the release of their upcoming, third season. I had the pleasure of attending this taping, and can only describe the scene as frenzied. The room reached capacity at least an hour prior to the start of the interview, as people crammed into any and every available space in the studio, eager to catch a glimpse of the hilarious duo. They have inspired a large and loyal fan base that is a testament to their success and skills, as is their presence in the zeitgeist.

"Yas:" an interjection that is synonymous with the traditional "yes," but contains more enthusiasm and expresses an extreme approval or liking of that noun or thing which it relates to. Usually the word "yas" is followed by "queen," or "kween." "Yas" is a phrase that is more than just a word, it's more of a saying that is simultaneously a pop-culture reference and a rallying cry. Its usage is symbolic of the popularity that Abbi and Ilana have, and the adoration that is felt towards them by their fans. It also highlights their importance as writers and creators of content and culture, especially.

For instance, their syntax has even reached the presidential hopeful, Hillary Clinton.
In a bid to appeal to a larger millennial demographic, she has begun to adopt the lingo of the "Broad City" ladies, on social media, sell merchandise with the popular slogan emblazoned on the front, right under a Warhol-esque print of her face, and she is even going to be featured in an upcoming episode from this new season. But don't worry about feeling left out, just because Hillary is part of the club, this doesn't mean the show isn't relatable or relevant to the rest of us.

The opening scene of season three features a split-screen look at each of the main characters morning rituals, complete with peeing, pooping, plunging (the toilet), and primping-leaving little-to-nothing to the imagination. The scene is also hilarious and instantly familiar to anyone who has sung in the shower, given themselves a mirror pep-talk, etc. This scene is perfectly representative of the success and appeal of the show, which is grounded in reality. Having been labeled as
the "id girls" in the past, they represent the unmediated, instinctual desires of a contemporary generation-and the desires and experiences of sharing everything on social media. When watching this show, you feel like part of the group, and yearn to be with your own friends and go on similar adventures-which is entirely within the world of possibility.

In the aforementioned interview, Abbie and Ilana discuss their creative process: "The characters are completely based on us, they're just heightened versions," says Abbi. They continue: "This season contains a lot of 90's references- as a writer you cant be helped but be influenced by everything you've seen and been exposed to." The structure of the show has even followed a recognizable pattern, changing from an episodic series of fragmented vignettes, to a more continues development and progression. This too is relatable to many audience members who are trying to organize their lives and transition from a scattered existence, to a more structured lifestyle (but still spontaneous and fun). Whereas in the past, one might have been able to watch the episodes in a random order, Abbi suggests that with season three, you "watch the episodes in order."

The show sometimes deals with issues that might be particular only to New Yorkers, however, the ethos of the show is inspired in part by, and grounded in, a New York attitude and character, which can be relatable to anybody: that is, to be forward thinking, open minded, and progressive, as "any New York show would have forward thinking beliefs," says Ilana.

To return to the issue mentioned at the beginning of this article, it was brought to attention in the BUILD interview was the discussion about women's place in comedy, and how Abbi and Ilana feel as women who write and act in a comedy show. While the moderator of the interview, raised the issue, he added that he is sick of asking the question, but feels that he wouldn't be doing his job without mentioning it, which is an expectation perpetuated by society. Men often think that women are not funny, or they might think one woman or two are funny, but this is weird, or an anomaly. As a white male writing about or discussing this topic in an article such as this, like the moderator of the interview about the content these women have created, I have questions about how to respectfully handle the material. I am aware, and painfully so, that maybe I'm contributing to the problem by furthering an unnecessary discussion, which inherently might imply a counterargument. Although I strongly hope this isn't the case. And in fact, in this interview and another with writers and actors
Jillian Bell and Charlotte Newhouse, the guests were willing to discuss their feelings on the subject, to hopefully enlighten and set the record straight. Ilana Glazer pointed out that "we're almost at a point where this discussion is over, and thank God we're almost there and this discussion is almost over-it is disgutsting." While we are almost there, Abbi Jacobson mentioned that they are still constantly beat over the head and "made aware" of their femininity, and "asked about it almost every interview (they) do," as if people have to put them in a box and categorize them. Charlott Newhouse and Jillian Bell are "excited" about this moment that Ilana eluded to, where "it is the new norm," and nobody thinks twice about women in comedy. After all, women have always been funny. Amy Poehler reminds those who have forgotten, or might not know, that women have been some of our favorite, funniest, most beloved characters that we've grown up with. Not only have she and her partner in crime-Tina Fey-been at it for over two decades now, but women writers have been been behind other hilarious characters and sketches that we all know and love. SNL writer Paula Pell has created sketches and characters such as: Cheerleaders, Debbie Downer, and Gilley, to name a few. 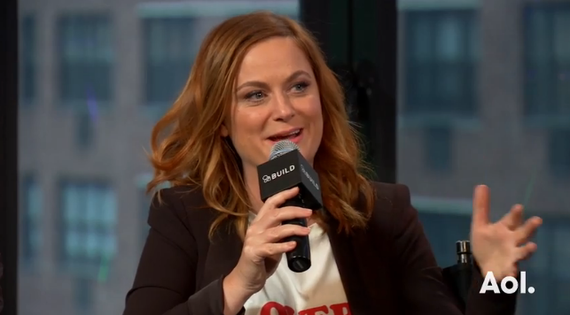 In fact, we've had a number of funny women here at AOL BUILD, recently, and they were funny before their interviews, and they remain funny after their interviews. Starting with
Natalie Leite and Alexandra Roxo of "Be here Nowish," who similarly to Abbi and Ilana take on issues of every day life. In the first scene of episode one, the characters attend a class to try to find clitoral nirvana via orgasmic meditation. The creators strive to be open minded and both playful and serious. Again, while some might find something "radical" about a comedy centered around two women who are open with their sexually and having their own agency, they don't view it as a political act. Alex said about this process, "Being honest, it's representative of our feelings and beliefs. A lot has changed since we started writing it, as we've changed." Natalia picks up there, "We're not putting things in there just to be controversial-everything is a part of our lives." 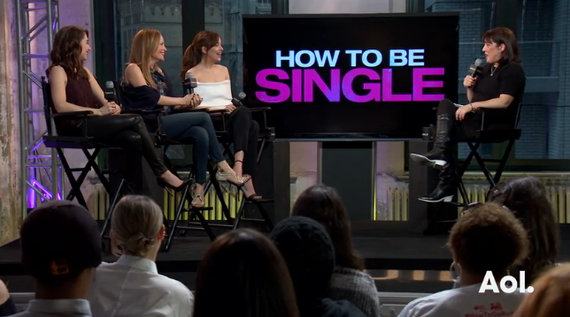 Dakota Johnson, Alison Brie, and Leslie Mann came to discuss "How to Be Single." Simply put, this movie is about questions of identity as experienced through relationships, dating, and going out. Struggling with self-discovery and identity isn't uncommon, in fact, it's an experience that is universal. These women are addressing real, viable options and courses of action to penetrate ones self-and the fact that that is a double entendre isn't a joke. Often in shows like "Broad City" and "Be Here Nowish" and "Inside Amy Schumer," the main characters discover things about themselves through their sexuality, which is a familiar topic of contention in our country and politics today, but is completely legit. Grappling with ones own sexuality is something that everyone who has gone through puberty can relate to, and kudos to these women who are giving a voice and outlet for everyone to identify with and bringing such feelings to the forefront of our cultural and political landscape. But specifically, these shows speak about women's sexuality, a topic that has often been taboo, and women have been told that it's a subject which is not okay to talk about. Men, however, have had the freedom to talk about their sexuality-and women's-for a long time. It's about time, and a good thing, that women are finally allowed this same territory.

"Women talk about women!" Abbi Jacobson of Comedy Central's "Broad City" shared this semi-sarcastic, potential lead with anyone who was watching her (and Ilana Glazer's) interview promoting the upcoming season, and then felt compelled to write a Facebook post-or something-about it. Specifically, she was referring to the women in comedy conversation, and It's a subject that they are tired of talking about, and frankly, one we are tired of too. It shouldn't be a conversation, let alone a debate. None the less, let's talk about it. I'm conflicted because I want to share my opinion, which is supportive of these women, but am aware that in writing about this topic-as white male, no less-I might be furthering the problem. In an attempt to educate myself, and maybe a few people who are more oblivious than myself, I've written something to engage in the discussion. I've tried to be respectful and handle the subject carefully. This is a discussion about funny women, and how we can move past discussions just like this one.

While absolute equality hasn't been achieved yet, we're moving in the right direction, and it is in no small way thanks to women like Amy and Tina, Abbi and Ilana, Alex and Natalia, and Dakota, Alison, and Leslie. As we move forward and continue to make progress, there might be one more thing that we can to, that hasn't been done yet, suggests Abbi Jacobson and Ilana Glazer: "When confronted with the question of women in comedy, maybe an effective way to deal with the issue wouldn't necessarily be to drop the question, but maybe to ask men the same thing. Next time you have a male comedian on the show, ask them: 'how does it feel to be a man trying to write comedy?'"