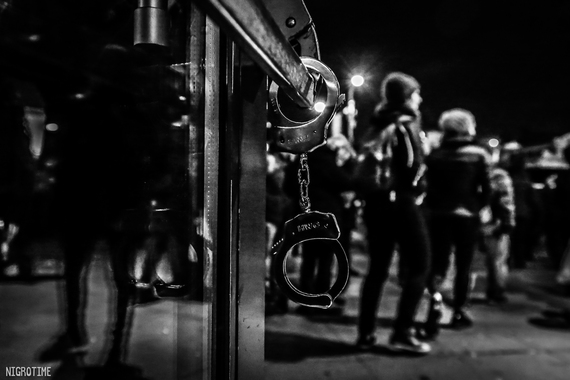 Six corporate leviathans stand right on top of mainstream media's metaphorical garden hose, and by simply shifting their bloat about, control the flow of information that most Americans read, watch and hear. These giants' names are Viacom, CBS, Comcast, Newscorp, Disney and Time Warner. They were created in great part by, but with no thanks at all to, Bill Clinton, who deregulated the FCC, in 1996.

Of course this is not breaking news. Many have written extensively on this corporate consolidation, on how these six companies dictate which images hit our retinas and control what news is fit to print (or broadcast). 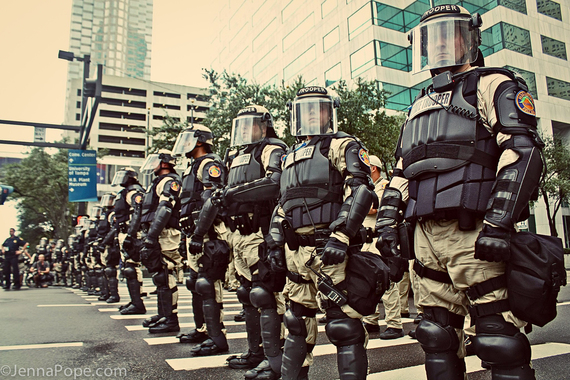 "Elite media covers elite power," Phil Donahue told me during an interview in 2013. "You don't see many dissenting voices on Meet the Press. And that's an important side of our national dialogue that's never heard."

The consequence of this type of selective reporting exposes the cherry picking nature of "elite media" but also reveals something more significant.

And it is this: people are committing acts of citizen journalism.

From the denizens trapped in New Orleans during hurricane Katrina who sent out dispatches, to Sarah Koenig's Serial podcasts, to Glenn Greenwald's and Laura Poitris' reporting on the NSA's program of mass surveillance, independent and citizen journalists are the engines of investigation, the generators of content, the creators of images, the hub of All The News They Didn't, Can't or Won't Print. 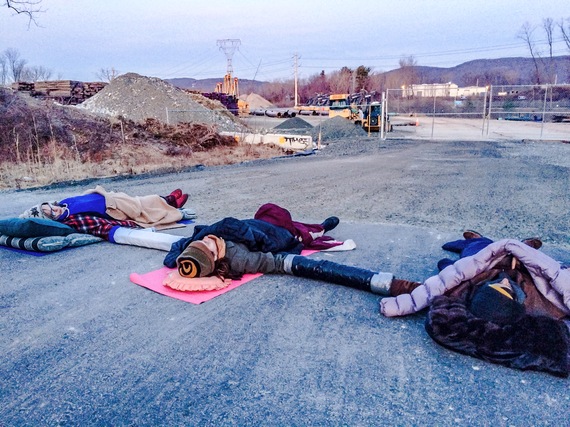 Having witnessed the news of their lives being dismissed or ignored, more and more people have put their bodies on the line, their ink on the page and their images on the web. With defiance, tenacity and boots-on-the-ground bravery - and often with little or no financial backing - independent and citizen journalists are utilizing tools of the digital age to change the conversation at a grassroots level.

The message being: I dare you to ignore this further. 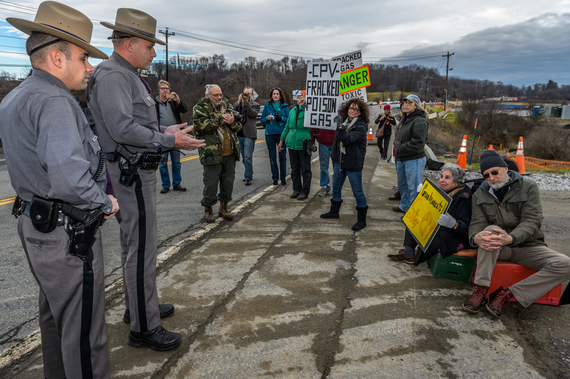 Think back to even just a few years ago when issues like income inequality, divestment from fossil fuels, student debt, the prison industrial complex, global warming and Black Lives Matter were barely a sound bite within the national dialogue. The trees were, in fact, falling in the forest but it is thanks to independent and citizen journalists that the public actually heard the sound.

Take, for instance, the fight for a $15 minimum wage, which began in New York City in 2012 with merely a few dozen protesters taking to the streets. It was through a grassroots media campaign that cultivated what it has become today - an international movement. 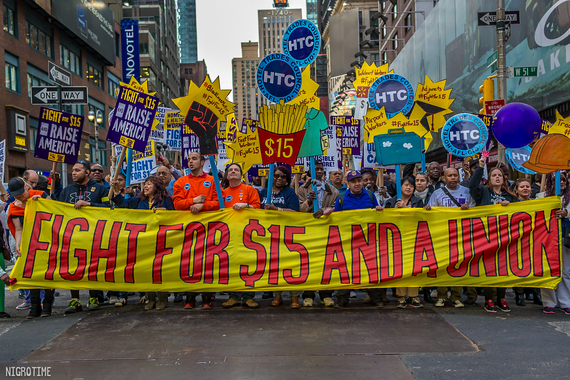 The same can be said for the fight to stop the Keystone XL Pipeline, where back in 2010 the tar sands tube-of-destruction was all but fait accompli. After dozens of independently generated stories flooded the portals of communication, and then a citizen groundswell that marshaled 100,000 people to sign up and risk arrest if Obama didn't change his mind, mainstream media had to take their earplugs out and blinders off. As of 2015, the project is effectively dead (though resuscitative gambits are in the offing). 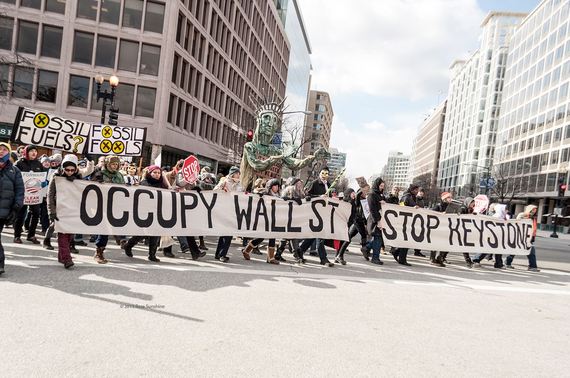 (Photo Courtesy of Resa Del Sol© - February 17, 2013 - Over 40,000 marched on Washington, urging President Obama to take action against climate change and reject the Keystone XL Pipeline. The "elite media" all but ignored the march. )

Or, the on-going Monday night actions of NYC Shut It Down, a group who has gathered at Grand Central Station for over a year now to remember and protest in honor of a different victim of police brutality, demanding an end to unaccountable police violence occurring across America (tirelessly documented by Keegan Stephan, and others -- #PeoplesMonday).

Is it then up to citizen journalists to make sure that the news of our lives is newsworthy? Often, this is the case. Without coverage and reporting by independent and citizen journalists there is little to debate if these abovementioned issues would have gotten the nationwide coverage, let alone achieved even a modicum of change.

Just like the Flint Water Crisis -- where it took an independent journalist to expose the criminal evolution and subsequent health horror that is happening there now -- another investigative story, which I am peripherally tethered, was just published on the website Hundred Eighty Degrees, by another citizen journalist, a colleague, Doug Forbes. 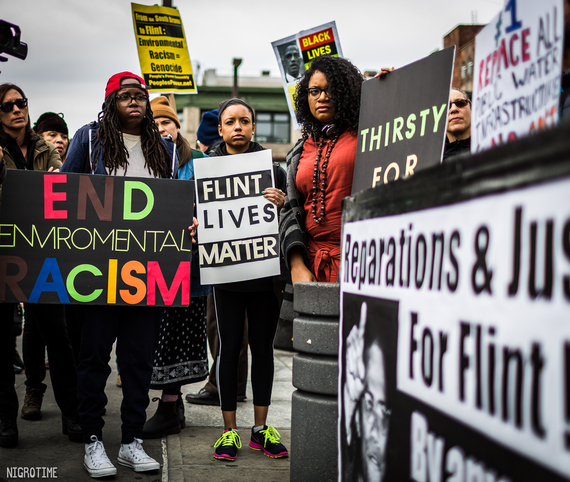 Doug's story is the result of a four-month investigation that examines and calls into question "fraudulent business practices of Gravity Payments," the Seattle-based credit card processing company that garnered international acclaim after its CEO Dan Price announced a $70,000 minimum salary of every employee. (Note: my affiliation with this piece stems from my advocacy for the Fight for $15 movement, which is explained within Part One of the report).

Now, don't glaze over the credit card processing topic quite so fast. It's a juggernaut of investigative journalism that details a scheme in the hundreds of millions of dollars, involves some of the nation's biggest finance brands and potentially jeopardizes thousands of small business and hundreds of thousands of jobs.

Similar to Curt Guyette's reportage of Flint, whereby it took months and months of work before the established outlets relinquished corporate column space, Doug Forbes' self-funded story is seemingly on a similar trajectory, as follow-up coverage is beginning to pop up across various media platforms, (Entrepreneur, Geek Wire, and the San Francisco Gate).

Beyond the far-reaching economic significance of the Gravity Payments story, however, is the fact that within his four-part piece, Forbes also indicts the "elite media." News sources the world over, according to Forbes, anointed the Seattle CEO (either positively or pejoratively) as this celebrity corporate Jesus figure without ever executing the most rudimentary of fact checks. 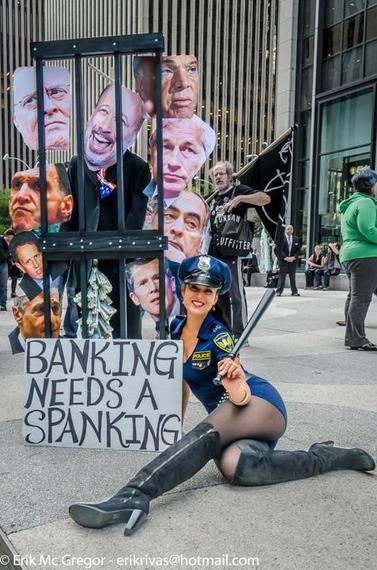 (Photo Courtesy of Erik McGregor © - Marni Halasa founder of Revolution Is Sexy, a consulting service for activists and political groups on how to stage media-worthy protest.)

Those who lionized Price utterly "Lance-Armstronged" the story; they rolled up their sleeve, got injected with his dope and then peddled every fractured fairytale as fact. Those who vilified Price as a socialist-communist-idiot-idealist-who-thinks-he-can-walk-on-the-water-and-swim-on-the-land strangely didn't bother vetting him either. Even a modicum of due diligence, as Forbes' story asserts, would have revealed that Price had been crucifying his clients.

Citizen journalism, to be sure, is a dynamic way of saying to the "elite media" do your job, without actually saying, do your job. In Forbes' case, however, he not only came out and said to global media outlets, including the New York Times, NBC and Bloomberg Businessweek, you did a bad job, but he's relentlessly holding them accountable for continuing to sit on their hands.

And therein lingers the conundrum of citizen journalism: we report, write, blog, shoot and post our work to expose stories that the "elite media" dismisses, but secretly (or, perhaps not so secretly) we're also hoping to garner some exposure from them. 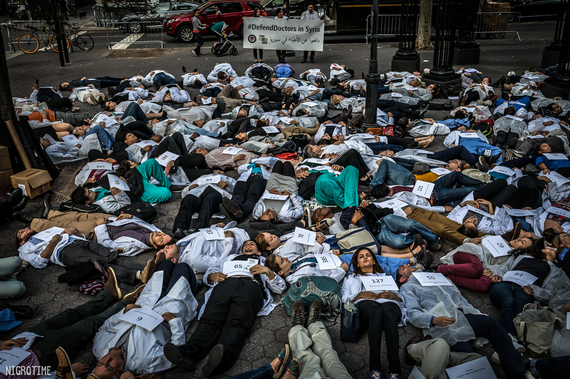 (©nigrotime - Oct 29, 2015 - Healthcare professionals participated in a die-in near the United Nations to represent the nearly 700 medical professionals killed during the Syrian conflict.)

Because this is what citizen journalists want, right? Exposure. Exposure of their work, exposure of the truths that they had investigated, witnessed and disseminated to the world because no one else was doing it.

In other words, traction. And without traction, these stories fall into an abyss. (The fight to create awareness around the Trans-Pacific Partnership is one story that journalists/activists like Kevin Zeese, Margaret Flowers and Adam Weissman have been doggedly writing about, trying to expose a "free trade" deal that would, in the broadest of terms, embed corporate power into every area of our lives).

To be fair, the "elite media" wants traction just as much. The difference between the "fourth estate" and the "citizen collective," however, is that the corporate media is monetarily driven with millions of people already transfixed with a front row seat, while citizen journalism, at its core, is advocacy based and essentially handing out comp tickets to a band that few have listened to let alone heard of. 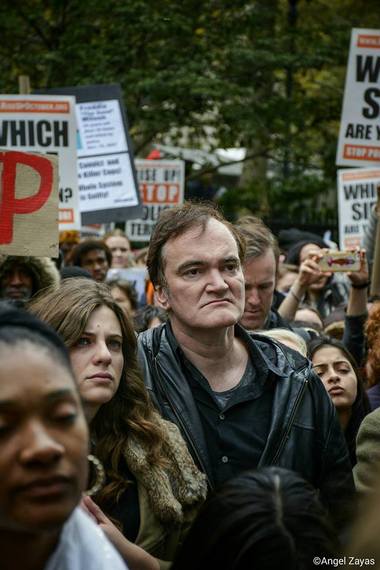 (Photo Courtesy of Angel Zayas© - October 24, 2016 - "The police would rather start fights with celebrities than examine why the public has lost trust in them." --Quentin Tarantino #RiseUpOctober)

Independent journalists want their audience (as paltry as it sometimes may be) to re-act and then perhaps take action. Any action. Even a "click," a "like" or a "share" can become the mechanism by which the "elite media" will no longer be able to ignore.

Some criticize citizen journalists who attempt to garner validation from within the fortified walls of the fourth estate as vainglorious. But validation is not the point. Reaching and preaching beyond the choir is. Reporting for a citizen journalist comes from a place, I believe, of moral obligation; it is a way to give voice to those who are being ignored or silenced.

And that is the power of citizen journalism. If a story gains traction, if it reaches a point of critical mass, creates a fiscal scenario palatable to "elite media" outlets, then they allocate resources and, hopefully, do their job. This doesn't mean they won't spin it, but at least the breadcrumb trail of truth has the potential of being honored.

(Side note: This doesn't mean that we, as citizen journalists, should give our work away for free, especially when the "elite media" requests to use, say, a photo for a mere credit on the mainstream evening news. But choose your battles. Just because they didn't "get the shot" or "investigate the piece" or do their job does not mean they can abuse the actual worker, the actual journalist). 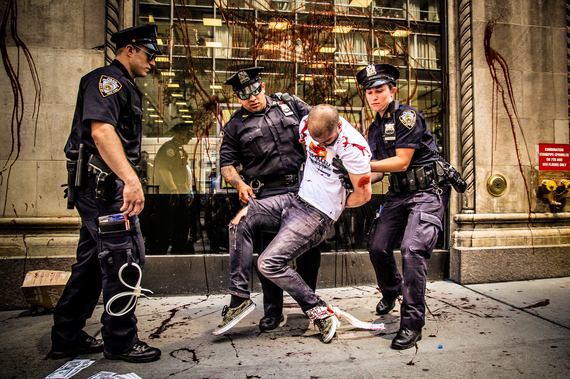 (Photo Courtesy of Jenna Pope© - July 25, 2015 - A pro-Palestinian activist being arrested during a die-in outside of IDB Bank in NYC)

Take the parody edition of The New York Times that was handed out on February 2, 2016 in New York City, by the two groups Jewish Voices For Peace and Jews Say No! In a press release the day after 10,000 copies were distributed (and more downloaded online) Beth Miller of JVP said,


"Our paper gave voice to stories and facts that are left out of The Times. Like our "Corrections" section, where we printed the names of Palestinians killed by Israeli forces over the last few months - names that had never appeared in the paper." 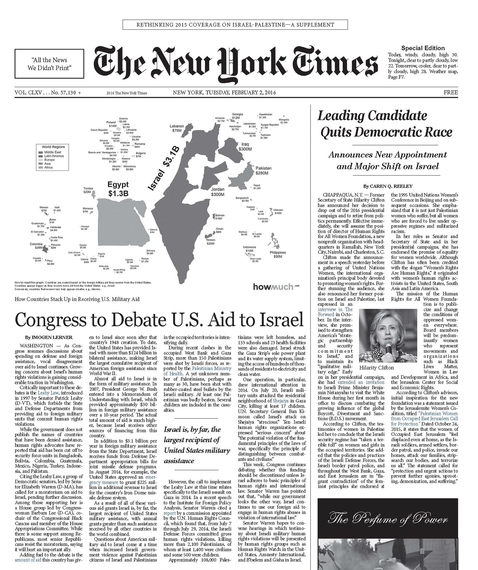 Parody, in this case, is a bit of a miscatgorization because within their edition were researched and verified stories - in other words, they printed news.

Why is exposure for citizen journalists so difficult? Perhaps the answer is tangled somewhere within the mechanism of the 24-hour news cycle.

For journalists like Glenn Greenwald (who has always worked independently) and Curt Guyette (recently honored by the Michigan Press Association as "Journalist of the Year") and Doug Forbes (who spent months researching and digging) it is their patience that became the necessary imperative that freed them to report.

Patience doesn't exist inside the 24-hour news cycle. Why? Money. The "elite media" need stories to pay the bills every hour, on the hour, every day.

Much like the children's story where the dog chases the cat that chases the mouse that chases etc., etc... The cyclical nature of how money has compromised the breadth and scope of reporting is rather easy to follow.

The money, which comes from advertisers, fuels corporations who employ lobbyists that enact policy channeled through the FCC, which is run by, you guessed it, the six corporate leviathans. Wash, rinse, repeat. 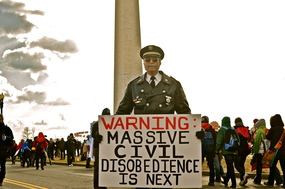 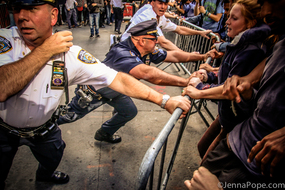 How, then, does one enter the conversation so that those within the powerful walls of the fourth estate listen? We can't. Small voices will not be heard in big places. But we can have an immense impact if we continue to do it collectively.

Independent and citizen journalism are the fertile landscape from where the corporate media should be pressured to harvest their material. The less they report on our real lives, the more important it is to lard the system with our words and images, to aggregate each other's work and to continue committing acts of citizen journalism.