Just before Christmas my Suburban died. I will spare you the mechanical diagnosis, especially since I don't understand it myself, but, in layman's terms, my Suburban made a kachunk-kachunck-kachunk sound. Followed by a ticcata-ticcata-ticcata. And then something like a whirrr-whirrrr-whirrrrr. Long story short, I am now in the market for a new (used) SUV.

But I detest car shopping, and most of my weekends are tied up with kids' activities, so I really haven't had the time for it anyway. I don't like dealing car salesmen -- not because they are pushy, but because they are all so nice that I feel genuinely bad if I don't buy. I loath test driving -- it makes me nervous. And I am terrible at making a decision -- especially ones that involve spending thousands of dollars. So yes, I have been avoiding this dreaded chore, but fortunately my parents have generously loaned me Ruby, a four-door hatchback from the early part of this century.

I want to be careful not to misrepresent this situation. I have not gone from driving a top of the line luxury car to driving a beat up old clunker. But I have gone from driving a nice, roomy Suburban with a few bells and whistles to a much smaller fourteen year old vehicle with numerous dings and peeling paint. Ruby also boasts numerous other "features" like window tinting that is streaking (causing the windows to stick and make an annoying rubbing sound when we roll them down) and a panel on the inside of the back hatch that has come off, allowing the tail lights and reverse light to shine right into the vehicle. In short, I've downgraded.

Yet, I am grateful. Not only has driving Ruby conveniently kept me from having to car shop, but driving Ruby has been enlightening. Here are five things I've learned from driving a crappy car.

My kids are more superficial than I realized. My children are mortified by Ruby. They never get into this car that they do not sigh with disgust and slink down in the seat a little. Are they hoping no one will recognize them? When I try to explain to them how great she is -- fun to drive, excellent gas mileage, easy to park -- they roll their eyes and shake their heads. I might as well be explaining the virtues of sensible shoes or a fiber rich diet. If their friends are with us, they apologize for Ruby. "Sorry about our car. My mom is looking for a new one." Where was their vehicular pride when the Suburban was full of dead french fries and straw wrappers and smelled like old socks? I didn't hear anyone apologizing for our car then. But for some reason, Ruby embarrasses them. I'm not proud of this. I'd like to think that their sense of coolness was not attached to the car that picks them up at school. But apparently having your mom pull into the car-rider line and roll down a half-tinted, window that makes a rubber-on-glass screeching sound that can cause dogs to howl, is super uncool.

My car is not an extra room. Compared to Ruby, the Suburban was cavernous. Maybe that's why I found it so easy to store things in the back -- recycling, boxes of old clothes, coolers, empty luggage. It was so convenient to toss things in the back of the Suburban and forget about them. But not with Ruby. With Ruby I barely have room for my kids, their backpacks, and a few groceries. Driving Ruby has forced me to keep what little space she has free for when we really need it. For the first time since I had children, my car is tidy -- like my own a little oasis of order.

It's fun to ride with the windows down. Did I mention that Ruby's air conditioner does not work? This might not seem like a problem in the middle of winter, but we've had some unseasonably warm days. And in such close quarters, it gets hot in that car in a hurry. Many afternoons I've had to open the windows, and I've liked it. Driving a car with perfect climate control can be nice, but there's something fun and exciting about zipping down the highway with the wind in my hair. This would be even more cool if the radio worked...

Silence is golden. To be fair, Ruby's radio does work. Sort of. On the right day in the right place, I can sometimes pick up this one easy listening station. But I've realized that not having a working radio affords me the extremely rare opportunity to enjoy some quiet. I'm not alone in the car very often, but when I am, the silence is a gift.

I will still get where I'm going. Sure, I have missed a few of the bells and whistles that my Suburban had, but not having them has not exactly been a hardship. I need a car that will safely and reliably get my family from point A to point B. Ruby does that. I sometimes miss satellite radio and eight cup holders, but in the end, I still get where I'm going. I always thought of some of those luxuries as deal-breakers, things I had to have in a car. Now I know the real luxury is having a car at all.

At some point in the not-too-distant future, I am going to have to break down and get a new/used SUV. A family of six can only get so far in a car that barely seats five. Baseball season and summer vacation are just around the corner, and I will definitely need more seats and more room. In the meantime, driving Ruby has, at the risk of sounding too lofty, given me a certain sense of detachment that will make me appreciate the features in my new car and at the same time, make them seem a lot less important. 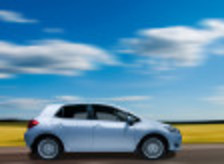