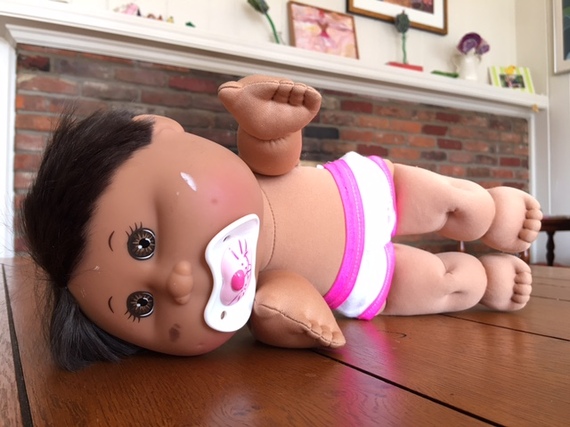 This post originally appeared on the OMG EDU blog.

My daughter, who is 2 and some change, recently initiated a conversation about breasts, nipples - and mustaches.

Most definitely not, I thought. But I needed to do more than "think" in order to correct her mix-up.

"I have boobies. You have nipples. One day you will have boobies too. Everyone has nipples! Daddy has a mustache."

My daughter pondered this for a moment. She looked up from our bed, on which we were lounging, and toward the doorway before making a declaration to settle the matter.

I assure you that there are no hirsute doors in my house.

Yet here we were enacting a convoluted, toddler version of the "birds and bees."

We were lying in my bed well past her bedtime, but since she was finally emerging cool and chatty after a three-day fever I was inclined to indulge this tête-à-tête.

And she was no doubt primed to talk body parts (and such) since we just finished reading her favorite nighttime story and mine, "The Tushy Book."

But while little MB was focused on the upper extremities for the moment, my thoughts lingered on the body parts south of the border - especially since I was reconsidering of late the nickname we attached to "vagina" when we began (and are still continuing with) the potty-training process months earlier. In our house it's called the "pookie-vagina." An improvement, ever so slightly, from "pookie." Such was the moniker from my childhood in the 1980s.

When we began the potty training process with my daughter a few months ago, I felt torn between wanting to use the anatomically correct word but also wanting to cute-ify it. I had a hard time reconciling the distinctly un-cute phonetic sound of "vagina" with the cutesy sound of just about everything else that constituted our conversations with a toddler: cookie, egg-y, milk-y, Papi, Bubbie, boobies, and my favorite times of day: nappy-noopie and nighty-nighty.

Throwing "vagina" into the linguistic mix just seemed a little .... Strident, perhaps. Phonetically speaking, of course. Vagina-y wasn't much of an improvement. 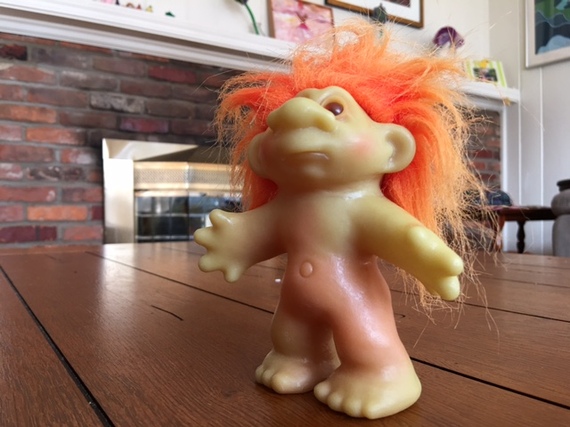 I told myself that as the adult in this relationship I should model linguistic diversity. I should embrace words of different tones and sounds. I should not fear words because then wasn't I unsettled by the concepts and objects they represented? Nor should I privilege cute sounding words. And I certainly should not toddlerize the English language by turning its offerings into adorable-sounding derivatives.

Yet such pep talks with myself failed.

In the end, I had a hang-up with "vagina." The word. This much was clear.

I was not alone in this linguistic quirk. I tossed the question to my friends on Facebook, inquiring whether they use the anatomically correct terms with their kids. It turns out I was not alone as a parent who goes through great lengths to mask certain anatomical utterances. The toddler-rated nicknames for private parts ranged from "mush," "tee-tee," "private spot" and "pouppi" for female anatomy; and "snoot" (rhymes with "foot"), "pee-pee," "wizzywags," "pecker" and "tallywacker" for male anatomy.

A relative chimed in online:

"The first time I heard 'vagina' I thought it was in China," she said, demonstrating just how easily one can confuse anatomy with geography when unschooled in correct terminology. 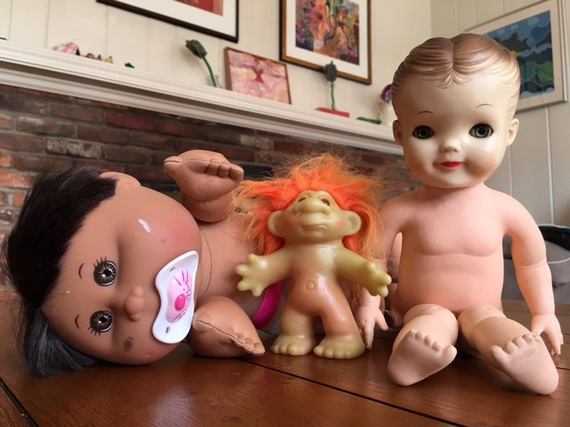 By settling on the "pookie-vagina" in my house we birthed a hybrid that introduces the "vagina" into our toddler's lexicon while also adding a cute quotient.

But trouble emerged soon enough during a recent rendition of "The Tushy Book."

I read to my daughter, "Sitting down would not be cushy, if you didn't have your - "

"POOKIE," MB squealed, delighted to showcase both poetic license and quasi-knowledge of the anatomy.

While I appreciated MB's effort at anatomical inclusivity - even at the cost of straying from the veracity of the text - I couldn't help but wonder what happened to the second part of the word. Did she intentionally send "vagina" packing into anatomical oblivion?

Flummoxed that I perhaps aided in the symbolic annihilation of "vagina" from my daughter's burgeoning vocabulary, I went in search of notes I scribbled during a phone conversation some months back with Kate Rohdenburg, a sex educator. She advocates for using the word "vagina" (and penis) with children.

"Talking about stuff that is awkward and uncomfortable is part of being a parent," she said.

Yet I was buoyed by what she said next. "It's OK to use nicknames as long as they know the real name."

What's at stake, said Rohdenburg, is that when parents label the female anatomy as something that's vaguely "down there" then it gives the impression that there are some body parts you talk about and some you don't, initiating an impression of shame. Besides, Rohdenburg asserted, you want your child to be able to talk to you about her vagina - and by naming it correctly you're placing value in being matter of fact about it.

I buy into this logic, but with my twist. When my daughter reaches the pre-teen years I want her to speak to me about questions she's having with her vagina. Yet I also recognize that I had little trouble talking to my mom about my "pookie" when I was an adolescent.

In that sense, words didn't matter as much as my open and comfortable relationship with my mother did.

This past weekend we (by which I mean MB) made progress in returning the vagina to her lexicon. She was watching her best friend use the toilet. He stood in front of the commode, typical of the XY types. She watched him holding his little member and said, "Is that his pookie-vagina?"

No child, it's not. But before answering her I turned to the boy's mom. "What do you call it?" I asked.

Penis, she said. It's not rocket science (no pun intended).

The other night I asked my mom on the phone why she chose the word "pookie" to refer to my female anatomy. She said she had no idea, especially since her parents used the phrase "the tickle" when she was a kid in the 1950s.

Suddenly I felt a surge of superiority.

Ph.D. Assistant professor. Essayist, omghinda.com. I write on gender, power, scandal and politics. My book is "Scandal in a Digital Age."