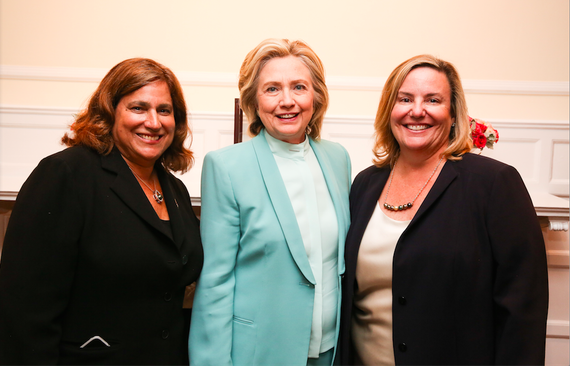 Dlugacz on the left and her partner, Claire Lucas, on the right

With a little help from her friends, she founded Olivia Records in 1973, allowing female artists, who likely would otherwise never been given a shot, to record. Nearly twenty years later, she morphed that vision into Olivia Travel, the lesbian travel company where women can "live free."

Her name is Judy Dlugacz and to women all around the world, she is a lesbian super hero, creating community and "life the way it should be," where respect for and kindness towards others trumps all else.

Considering her business model, it's no surprise that Dlugacz has been working tirelessly as an advocate for LGBT and women's rights -- human rights -- since she was old enough to know she could. She's lent her support to causes that include Human Rights Campaign, National Center for Lesbian Rights, Victory Fund, GLAAD Media Awards, Lambda Legal Defense and Education Fund and National Organization for Women.

The awards and accolades she has received are almost too numerous to count, including being appointed to the LGBT Leadership Council for President Barack Obama's 2012 re-election campaign. Dlugacz's sights are now set on the next presidency. Not surprisingly, she stands strong with Hillary. Although she is quick to confirm that should Bernie get the nomination, she will work just as hard for him.

In the meantime, she is spending any time that she's not busy working at Olivia or happily playing with family, making sure that the next person in office has all of our backs -- not just their own. I spoke to Dlugacz to find out more about how she became so politically active and why she feels so strongly about getting the right woman, sorry, person, in the White House.
What sparked your interest in politics? 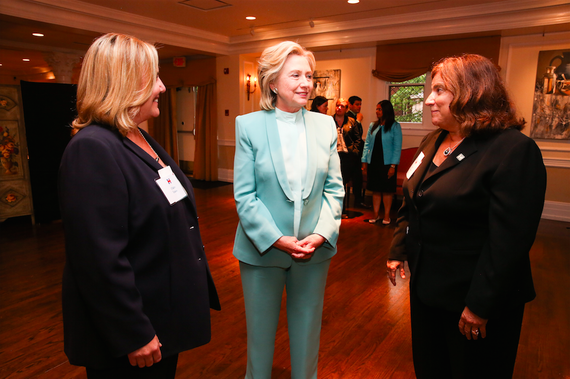 1. How have you integrated your politics into your work?

I've always considered myself a political activist and the business was second. We have to have a business so we can have the freedom to do our political work. At the same time we could organize through music. How beautiful is that? Creating Olivia was all about creating a culture so important to activism and political movement. We created this amazing network of people. They were artists and had a feminist consciousness. They helped to create a culture.

At the time, it was a lesbian feminist culture that never existed before. In the 70s, there weren't really women out of the closet. On campus there was like this little group of 20 radical lesbians. Lesbianism was a great plus for conscious women. We began to really understand that. It was like a spark that went through the country. We were a radical group of gals in those days.

2. How do you work to inspire others to get involved?

I'm just doing what I always do. I take my own experience and I project it.
I didn't know how to get involved politically in terms of the Democratic party.
I was much more of a community organizer. I was about bringing women together and making friends and connections and it was everyone's choice in terms of where does it goes from there.

I'm like the Pied Piper. "This is my experience. Come with me." It's very powerful. I've been given the opportunity to do this because I've been around a long time. And people know and trust Olivia. So in the Olivia world I could really, really express these things.

I didn't know how to get involved. But I knew I want to get this person -- Hillary -- elected. I got connected but more than anything I helped people to understand what we need to do. I'm talking to people not just about giving but about raising and to help the campaign flourish and make sure they know who we are.

The first thing that ever happened was there was this idea. My partner Claire was very involved in the Democratic party. On the LGBT council, there were very few women involved. There was this idea to do a round table with First Lady Michelle Obama. We did six of them with twenty-five women each time. Every one of them was more amazing then the next. First of all, she's amazing. But the women around the table were amazing too.

3. What is it that makes you such an avid support of Hillary Clinton?

First and foremost I think her being a woman is essential to the conversation. Being a woman is not the only reason I would vote for her. But the woman part of it is so important. She has spent her entire life been a feminist, a strong advocate for women and girls. She understands the issues women face. She is a woman so she knows. She understands my concerns and holds my values.

The world will change because we have a woman President. She will pay attention to things that are first and foremost women's issues and that is extraordinarily important at this point in terms of how much the culture towards women will change.

It won't be easy. But she's going to make major change. She did great work as a Senator and as Secretary of State. But when she can be herself, she'll be able to do amazing things. Not to say that Obama hasn't done incredible things. But this will be doubling down on that.

We created Hillary's Fabulous Force. "May the force be with you," Hillary said after one of the debates and of course it has to be fabulous so we became the Fabulous Force. Now a group of all of these women is going around the country who want to be involved in getting Hillary elevated. We had people in New Hampshire. We have people in Colorado and South Carolina, including Meredith Baxter who comes and walks the precincts with us.

I've been very lucky. We were able to do the first LGBT fundraising event with Hillary last year in DC. She had the best time. It was the most amazing experience and we raised a lot of money for her. This wonderful link that we created allows the money to be tracked so that the campaign knows the money is coming from the LGBT community and its supporters and all the money goes to the campaign.

This is what lesbians and the LGBT coming together can do. So it builds momentum and awareness of our community and hopefully that translates into LGBT people having an involvement in the administration. Gay men are well ahead of women in terms of getting involved and now women are getting involved and its beautiful.

The other thing is that it is a mutual effort, an LGBT effort. I focus on the lesbian community because that's the community I'm in and can make a difference in. That's the part I can do. Claire, who is my partner, has taught me so much because she has spend more than a decade working in the Democratic party getting candidates elected. She has had a long-standing connection with Hillary working under her during the Obama administration. She's the mentor. 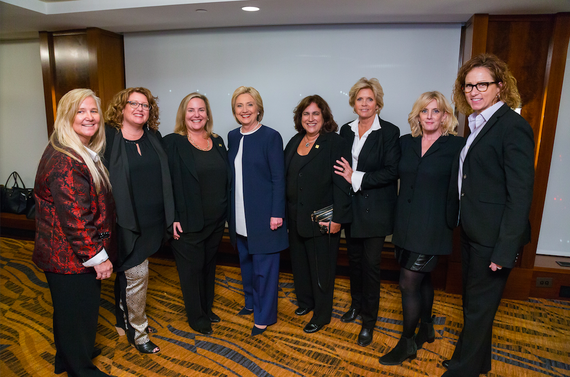 4. What do people need to be doing right now to support Hillary's campaign?

Get out there. Write to me judydster@gmail.com. Join the Fabulous Force. If they want to be a raiser, I will sign them up.

What is about to happen is she is going to win the primary. In the case that she doesn't, I made a pledge early on that I would support whoever won as hard as I support Hillary. That's what I ask of everyone. There are lots of people who are Bernie supporters and I completely understand the need for free education and all of these things that we as people want. But when you understand what's possible, you know that Hillary is going to do everything possible to get us all the best we can have.

The most important thing is we have to coalesce against the Republican candidate. They will control the House, the Senate and the Supreme Court. They will take back all of the LGBT rights, the right to choose, immigration reform, health care and privatize social security. God knows what will happen if there is complete control. We'll go back to the 50s for women, for gays, for African Americans. Voter rights will be demolished. We'll have a demagogue in the White House. Have I scared you enough? It's true.

Too many people have come to believe the negative rhetoric about Hillary and none of its true.

The main thing is -- How much can we trust the American public to not let a Trump or a Cruz be president? Any of those guys, their stances are so horrible and so Right Wing and the media controls it all. Whatever makes a good story. That's what they play up.

Every Bernie supporter and every Hillary supporter should have a pact in their soul to support the Democratic candidate and not sit it out.

5. If you had just a few seconds in an elevator with someone, what would you tell them in hopes of gaining their vote for Hillary?

It would only work if they're liberal leaning. (I can't help anyone whose values we don't share. Who are anti-women and anti-choice and anti-gay.) If we allow the Republicans to get into office, it will be a Republican coup and they will control every branch of the government and do whatever they want. And there will be nothing we can do.

The right wing as bad as it was in the 50s when my father worried we would lose everything because he was a Socialist.

6. Would you ever run for office?

If I had been younger and gotten in the politcal arena sooner I may have. My thing is what I'm doing. My whole life has been about visibility for lesbians and Feminism and changing the world for women and girls. And I've had this wonderful way to do that through Olivia. And now I have this avocation and I want the lesbian community to be powerful in politics and be seen as a force just like gay guys and other groups have had influence in that way. That's my political work.