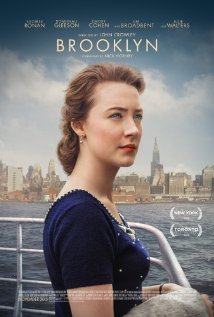 John Crowley's adaptation of the Colm Toibin novel Brooklyn (from a script by Nick Hornby) is an essay in morphology. Even though he's obviously Jewish, Emory Cohen's rendition of Tony Fiorello, passionate in the eyes yet deprecatingly hunched over, lies in competition with Domhnail Gleeson's stoic Irishman Jim Farrell, hips pushed forward shoulders slung back. It's a war of clichés. Besides this the movie is a period piece about the wave of immigration that swelled the Irish neighborhoods of Brooklyn in the 50's. It's a tear jerker replete with folksy homilies like one rendered by the resident boarding house madam, "a giddy girl is every bit as evil as a slothful man." The protagonist is Eilis Lacey (Saoirse Ronan) who, talking about morphology, is a perfect vessel for the conventions of melodrama with her huge watery eyes registering both news of death and incipient love and her pinned back hair. But there's one oddity about the film which, like Bridge of Spies, takes a photorealist approach to the recreation of 50s Brooklyn. The almost virginal Eilis turns into a bit of a vamp. She's cavorting with the local hoi palloi, on a trip back to the old country, without letting anyone know her big secret. You keep wanting her to give it up for Brooklyn, but she steadfastly goes her merry, hypocritical way, until the rug is pulled out from her by a local gossip. Out of nowhere the demure Eilis would be on her way to becoming a veritable Edna O'Brien, if her wings weren't clipped And what's she going to tell her sweetheart when she returns? The truth about where her heart was when she crossed the pond, that she was a faithless bitch, or some blarney?