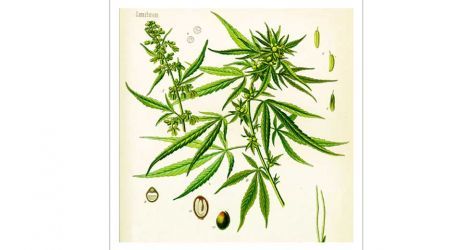 As with numerous holistic or so-called complementary and alternative medicine modalities, there is nothing new about healing with cannabis! Cannabis is an herb that has had a place in traditional -- meaning ancient -- medicine for thousands of years, dating back as far as 2637 B.C. in China. With so many striking out on their own to use cannabis as medicine, often when modern medicine has failed, we need to remove the stigma of this ancient plant and create a paradigm shift. Medical marijuana must regain its rightful place in the both the patient and practitioner toolboxes.

How is it possible that cannabis, which has documented efficacy in a host of medical conditions, is illegal according to the federal government and classified as a schedule 1 substance "with no currently accepted medical use and a high potential for abuse," and at the same time the government holds a patent on cannabis?

According to Sayer Ji, founder of GreenMedInfo, an online resource for evidence-based natural medicine, the main reason is the rise of pharmaceutical and chemical medicine. In his interview on the Holistic Cannabis Summit, he commented, "I don't know that everyone realizes this, but it wasn't until the industrial revolution in the 1880s that we shifted from almost exclusively plant-based medicine to chemically-based medicine, which enabled a profound access to capital because of market exclusivity."

Ji spoke about how the stigma associated with cannabis -- also referred to cannaphobia or cannabias -- is emblematic of where we stand regarding access to health freedom. How can we consider ourselves to have freedom over our own health if we don't provide our health care community or the public with access to alternative healing options such as cannabis?

"It's the result of a very effective propaganda campaign that has not paid much attention to the input of physicians," says Dr. David Bearman, author of Drugs Are Not the Devil's Tools and speaker at the online Holistic Cannabis Summit. "It's clear that this is a political matter when you look at it more closely."

Despite the fact that 24 states plus the District of Columbia have legalized medical marijuana, it is still largely regarded with suspicion, created during the days of Harry Angslinger who served as the first commissioner of the US Treasury Department's Federal Bureau of Narcotics for 32 years. At the start of his post during alcohol prohibition, Angslinger declared that cannabis was not harmful and "there is no more absurd fallacy" that it leads to violence. His view about cannabis, however, shifted dramatically when faced with the end of prohibition and therefore obsolescence of his department. He began releasing slanderous campaigns about cannabis and requested that the government federally regulate marijuana and its distribution. The aim was apparent:

"By the tons it is coming into this country -- the deadly, dreadful poison that racks and tears not only the body, but the very heart and soul of every human being who once becomes a slave to it in any of its cruel and devastating forms ... Marihuana is a short cut to the insane asylum. Smoke marihuana cigarettes for a month and what was once your brain will be nothing but a storehouse of horrid specters. Hasheesh makes a murderer who kills for the love of killing out of the mildest mannered man who ever laughed at the idea that any habit could ever get him."

"He had many bizarre thoughts that he put forward," Bearman said. "I think that Angslinger was probably the greatest bureaucrat of all time because he created problem were none existed in order to increase the amount of people listening to him. He was extremely successful and his propaganda lives on today."

Both the public and the medical community remain uninformed about many healthcare options, particularly cannabis. Additionally, when patients chose medical marijuana, they are often treated as criminals. Bearman spoke about how many states treat individuals who are recommended to use medicinal cannabis by physicians, "Why somebody who is suffering from cancer and who might get relief from the symptoms of their condition, that might even have it go into remission -- and there have certainly been numerous anecdotal claims of cures -- would have to have a background check and be fingerprinted is beyond me."

A growing number of individuals have been self-medicating with cannabis, finding it specifically helpful for mitigating pain, anxiety, and insomnia. So much success has resulted that individuals have started to push back against cannaphobia. Advocacy groups in the cannabis world are becoming plentiful and more diverse. Grassroots organizations -- MAMMA and HealthMJ, who are both featured on the Holistic Cannabis Summit, are two such groups. MAMMA, an acronym for Mothers Advocating Medical Marijuana in Autism, is lobbying for autism as an approved condition under Michigan's medical marijuana policy. HealthMJ, which bills itself as the WebMD of cannabis, is primarily focused on cannabis for cancer patients. Both groups are led by women who have had personal life experiences with family members and friends, who could have benefited from cannabis but were denied access. Organizations such as these are authentically inciting change in healthcare and helping to lift the stigma about cannabis.

The solution seems to be straight-forward -- educate people and allow freedom of choice in healthcare. Only by broadening the minds of all healthcare providers from doctors to health coaches, along with the public, can we move the conversation forward and rid the world of cannaphobia. You can learn more about medical marijuana from Ji, Bearman, and the founders of MAMMA and HealthMJ plus 23 other cannabis and functional medicine experts by registering for the Holistic Cannabis Summit. It's online and free April 4-7, 2016!