74 years ago, in the spring of 1942, in the city of Kiev, Ukraine, instructions were transmitted from top German officials to round up 20,000 workers to be sent to Germany as laborers. These workers, called Ostarbeiter (east workers), were often young, vulnerable, and considered by the Nazis to be the bottom of humanity's totem pole.

Maria Ivanovna was fourteen when notices appeared in the newspaper, bold black letters calling out her fate. "Germany calls you! Go to beautiful Germany! 100,000 Ukrainians are already working in free Germany. What about you?"

"We knew it couldn't be true," Maria confessed, "but what other choices did we have? We could not escape the German's orders."

Maria and her sister, Anna, filed into line at the train station, their futures now resting in the hands of two buxom, stone-faced German women.

"When we arrived, [the Nazis] walked around for hours screaming at us. Finally, we were inspected and separated onto different trains.

When I reached the front of the line, a German woman grabbed my hands and inspected them. She did the same to Anna. I found out later that they were looking for young girls with large hands who would be good at physical labor. I guess my hands were what she wanted because as soon as she looked at them, she pulled me away and pushed me onto a train by myself. I thought I would die of grief and fear that day." 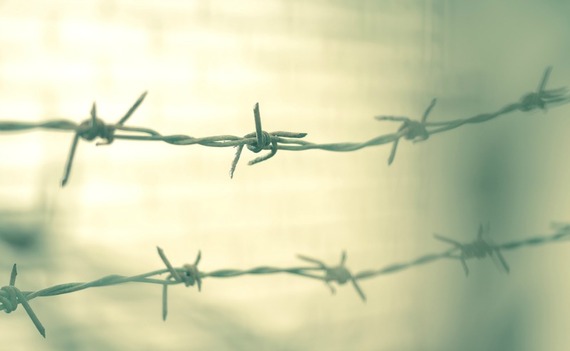 When I met Maria I was a fresh-faced teenager, enraptured with the novelty of this new country. It was 1996, only five years since the fall of the Soviet Union, and I was still learning to distinguish Ukraine as a country separate of Russia.

I sat with Maria and her family around a long, rectangular table, and I soaked in her story. Her bright blue eyes danced as she spoke, often moving in rhythm with her words. I said very little that evening. Somehow, even as a teenager, I understood that memories are sacred and weaving your way into them takes time.

For nearly two years, Maria worked inside an underground chemical plant, forced to fill the very artillery shells that would likely be used against her own people.

"There were many other children there with me. Our job was to fill German bullets with gunpowder all day long.

We worked long hours with little food. For some reason the other children in the camp turned to me for support and protection, and I felt that I could not let them down. I soon became very angry as our captors cut back the meals from two per day to only one. And worse, the food was often infested with bugs. I had to do something."

Using broken German, Maria demanded better treatment from the Nazi guards. Instead, she was beaten severely. She survived thanks only to the treatment of a kind, young German woman who nursed her back to health.

Maria wouldn't have to endure working as an Ostarbeiter much longer. Shortly after her recovery, word came that the war had ended, and she was to be set free.

"After two years of captivity, I walked out of the terrible camp with great joy, and also great fear. I didn't know where I was or how to get home.

I wandered for several days before coming to a train station. As a refugee, I had to sneak onto a train just before it left. I rode wherever I could find room. Sometimes, I could not find room inside a train car, so I hung on to the rails outside for hours."

Maria finally found her way back home to Kiev, only to find her city and her family forever altered.

"My brothers were all killed in the war. My father had been sent to Babi Yar (a killing ditch outside Kiev, where the Germans killed nearly 34,000 Jews in three days). He survived this awful place, but the life went out from his eyes."

It was Maria's next words that left the deepest impact on my young heart.

"Those were very hard years for our country. No one was untouched by tragedy, but we survived and we persevered. And now I am an old woman, but I'm happy. I have a wonderful family, and I am always loved."

We live in a day and age where war is a constant, and slavery still exists. It's heartbreaking and terrifying to watch and to feel so terribly helpless. But stories like that of Maria Ivanovna are a reminder that the human spirit is not so easily broken. 74 years later, and we still have evidence of this tenacity in the world around us.

As millions around the globe fight this very day for freedom from oppression, we must not forget these stories of old - stories that reveal the strength and dignity of mankind.

In the face of war, it's good to remember that beauty often springs from ashes.