Zoe flung the car door open, plopped her school bag on the floor, and maneuvered herself into the passenger seat of my car. With a flourish of her hands and a scowl on her face, she unloaded her complaint for the day:

"No one can tell us apart."

"I can." I felt a sympathetic grin spread across my face.

"But you don't count. People at school can't," she said.

I gripped her fingers between my own. "That's the definition of identical twins, honey."

The girls and I have held that identical conversation many times over the past 14 years. In fact, we've even held that conversation in reference to their father, Tim, who despite the years that have passed still cannot tell them apart.

Tim is not a traveling salesman or deployed to another country. He sees his children every day. You'd think by now that he would be able to find the differences between his daughters. But aside from eyeglass frames of varying color and now, a different haircut, the girls look, well, identical. 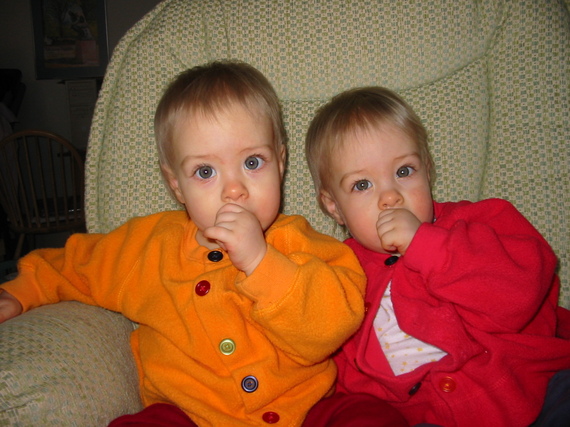 Eyeglasses didn't come along, however, until the second grade, and contrasting haircuts arrived in December 2015, so when the girls were born in January 2002, we simply dressed them differently each day, hoping that we'd remember which child sported which color.

In short time, we realized that the most effective and easiest method was to paint one fingernail of each child a distinct color. Zoe sported red polish, Talia purple. But I vividly remember a moment of panic when, in the throes of sleep deprivation during the first few weeks after their birth, I was convinced that Tim had given me the wrong baby to nurse for a middle-of-the-night feeding. I couldn't remember which pajamas Zoe had been wearing that night and I couldn't see her fingernail. "Are you sure this is Zoe?" I said. "Are you sure you didn't mix the babies up?"

But staring down at babies who often nursed in tandem during the day gave me many minutes to inspect my children, and it didn't take me long to figure out that the girls didn't look identical--at least not to me.

When people asked me what set each child apart, I'd pull out a litany of details: the set of their eyes, the length of their foreheads, the shape of the nostrils, the curve of their chins, the whorls on top of their heads, and the pudginess of their cheeks. If someone asks me the same question now, I can add to that list of differences: their gaits, the cadence of their speech, the deepness of their laughs, and a few of their mannerisms. Genetically, Zoe and Talia might be identical. But to me, they've been very different from one another for quite a long time.

Those differences are not limited to the physical, though. Genetically identical and growing up in a similar environment, each child has still managed to manifest unique personalities. Zoe tends to be stubborn and hold onto her anger, while Talia's disposition can best be described as mellow. Zoe gravitates toward babies and young children; Talia prefers animals. Zoe's confidence oftentimes shines; Talia requires reassurance. So despite their identical looks, after spending time with the girls, people quickly unearth their separate identities. They are, once you get to know them, so obviously, separate people.

But these children born one minute apart were also, at one time, almost dependent upon one another. So much so that Tim and I had them placed in separate classes from the time they began pre-school. Why? Because it's been so hard, so incredibly difficult, to make sure that each child is thought about as a distinct individual. So that each child is a she and not a they.

And therein lies the most difficult thing about parenting my multiples.

When someone asks me about the twins, it's rarely a question about one of them. And almost always, I want to answer in reference to the other. "The girls are great," I'll be tempted to say or "The girls have homework." If I do speak about them in the plural sense, I try to make sure the situation calls for it. Because sometimes, the situation only applies to one child and therefore, I should answer only with respect to that one child.

Almost three years after the twins came along, we welcomed a boy, and then another three-and-a-half years later, a girl. Of course, it's been challenging raising four (or any number of ) children in general. But in my experience, it's even more challenging raising an independent child when the life of that child is so inextricably interwoven with someone else. Even now, well into adolescence, I continue to ask myself so many questions regarding the girls. How can we make sure that they each have the attention they need? How do we make them feel special as individuals? How can we, in short, help them to be their own person?

I don't know if we're raising these girls properly. Books and resources can only go so far, and as a parent I find that I have to rely on my gut. After all, the only people living this life are the people involved.

So aside from different classes at school, I do make it a point each day to ask how each child is doing and how the day went. I give out individual hugs and praise and try to make sure that the girls have one-on-one time with me or Tim. But I find myself shaking my head, often, and muttering to myself about what I've done wrong or how I could have done something better. Parenting is, by far, the most arduous task I've taken on to date, but it's also the one job I have the most passion for. I want to be a great mother. I want to successfully raise these girls together, yet separately. 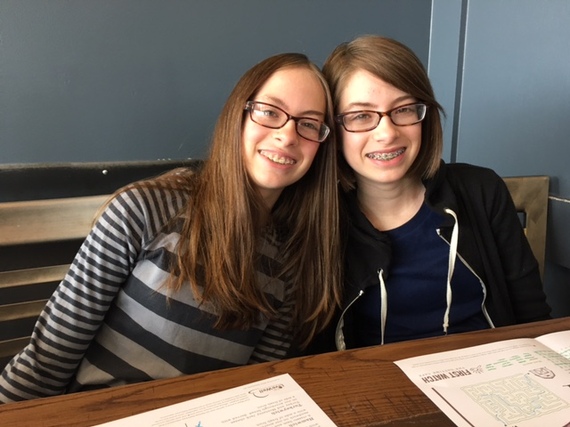 I've often asked the girls, "Do I treat you differently? Do I treat you as separate people?" Thankfully, they've always answered yes to that question. I'm hoping if I don't, they'll feel comfortable enough with me to tell me otherwise.