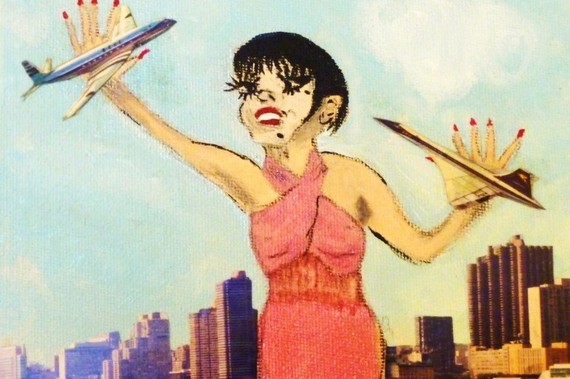 "Lizilla with a 'Z'", by Corinna Tomrley, used by permission of the artist

Over the last eight years, while President Obama attempted to do his job and a large percentage of our country medicated itself with the important things, like reality show star Kim Kardashian's big ass, the Hydra of Lerna--the Republican party and cable news networks--have seemingly reduced the US election process itself to a reality show with a big ass. By casting a pretend Republican and master showman Donald Trump as the star, the Hydra has created chaos in the name of entertainment. I ask you: what is Trump but a bellicose narcissist, a sphincter with a saffron sfumato combover? The vitriol that spews out of his mouth or, as I refer to it, "anal leakage," is broadcast with fetish-like detail by 24-hour media outlets to a desensitized, disaffected population--now an angry mob--eager to act out their fury for the cameras. As frantic Republican cast about for a Trump alternative and steel themselves for a brokered convention this summer, I would like to propose this solution: why not nominate a pretend Republican and master showwoman? Of course, I could only be referring to Miss Liza Minnelli.

"Liza Minnelli for President!" Even just saying those four words creates a dopamine spike. As a country, we're depressed--we deserve this. Let's face it, the president is just a talking head anyway so why not Liza, a woman who is not only a talking head but a singing head. Everyone knows that politicians are just actors who don't make much sense, so why not choose an actor who doesn't make much sense who is an "EGOT" (Emmy, Grammy, Oscar, Tony)? I assure you, I'm as serious as a hip replacement.

In actual fact, the idea of a Minnelli presidency is not entirely mine. It was first floated among the cognoscenti back in 2000 when artist Cary Liebowitz created the prescient "Liza Minnelli For President" rain poncho, which my dear friend Robert Looker gave me as a gift. Signed and numbered by the artist, I proudly wore my Minnelli rain poncho for years, until it was unfortunately eaten by my bulldog. Regrettably, all that was left was the text and, of course, the idea of a Minnelli presidency, which, if you ask me, has only grown in relevance and would, I'm certain, protect this country from a lot more than inclement weather. 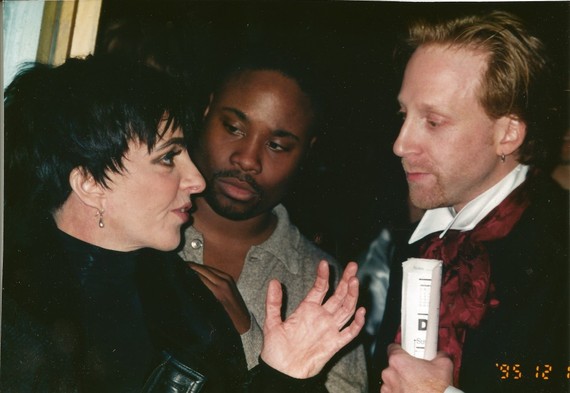 Miss Minnelli explains the difference between "bound" and "unbound" delegates to me several years ago. She managed to make the distinction captivating, theatrical, and really funny. Kinky Boots star Billy Porter looks on. Photo courtesy of the author.

What might we expect from a Liza Minnelli presidency?

1. Continued protection and expansion of marriage equality laws: Unlike candidates like Hillary Clinton, Liza's position on gay rights didn't have to evolve, she was born evolved. Not only is Liza in favor of equal rights, but she has first-hand experience with the subject, having survived legal unions to at least two gay men herself.

2. Dismissal of this divisive red state/blue state nonsense: In a Minnelli presidency, the color coding of political affiliation would seem so last season, replaced instead by the unifying idea of fifty states that glitter and sparkle in a rainbow of colors: one nation, under Fosse, indivisible, with liberty and bugle beads for all! Hit it, Pappy!

3. Speaking of color, where is it written that the white house has to be white? Let's salute Halston and re-do the whole damn thing in grey ultra suede! Or maybe just stick with the Minnelli-esque sequins--you know, something that really pops!

4. Continued protection of the Affordable Care Act: As the owner of a new hip and two new knees, not to mention a medical history twice as long and three times as complicated as the script to New York, New York, Liza understands the urgent necessity for all Americans to have access to affordable health care.

5. A new national anthem: As any singer will tell you, the one we have now is a violent, unsingable mess that no one can remember the words to. Why not replace it with something catchy and positive, like Kander & Ebb's "Cabaret"? At last, references to bombs bursting and ramparts (does anyone even know what a rampart is?) would be replaced by the inspirational story of Elsie and her admonishment to get out of the house and "come hear the music play." Can you imagine how sublime it would be if sportsfans everywhere lifted their voices en masse before all events and sang "Cabaret"? So positive, so "post-Gay." 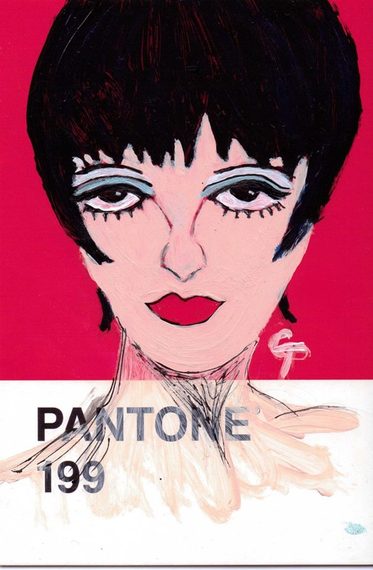 "Andy With a 'Z", by Corinna Tomrley, used by permission of the artist

6. Refreshing the pledge of allegiance: Enough of the right hand over the heart business. Why not jazz hands over the head with a cocked hip?--so much less depressing, so much more Liza.

7. Unity! Minnelli would is someone who could bring together both parties. Forget about Donald Trump, is there anyone who is more of a Washington outsider than she? As for shrinking government, Minnelli would be ambivalent--take it or leave it. Do you really think Liza Minnelli has the time or interest to think about stuff like "shrinking government?" Not when there's an audience out there!

8. Repeal of Citizen's United: Super PAC and corporate money would be replaced by the decidedly un-sinister "money notes" and Broadway angels.

9. The final curtain call for birthers: As the daughter of legendary film director Vincente Minnelli and Judy Garland, one of the most enduring sweethearts of the twentieth century, there will be no arguments about whether President Minnelli is actually a US citizen. If those crazy birther people come after Liza, they can go watch the last scene of mama's In the Good Old Summertime and shut the fuck up.

10. Energy! As anyone who has ever seen her perform knows, the "z" in Liza stands for "zip." This woman has been a force of nature for decades, and that tremendous energy will serve her well as our Commander in Chief. Don't we deserve a president who could finally bring glamour and pizzazz to the beltway?

11. Speaking of the beltway, wouldn't it be nice who have a president who can really belt?

12. Experience! Liza knows how to work a room. What is politics if not performance? What is campaigning if not a show? A born performer with a lifetime spent on the public stage, Liza has more charisma in a single eyelash than Trump, Ted Cruz or anyone else the Republicans put on that TV show--I mean, the debates.

13. Consistency! With Liza, you might expect a shuffle or shim sham but never a flip flop. The fact that she doesn't always speak in complete sentences or has a tendency to digress would not be particularly noticeable. And unlike Mr. Trump, even in the most awful moment of her worst day, Liza Minnelli has never said anything negative or mean-spirited about anyone.

14. Public decorum: Speaking of that man-child Donalad Trump, could you imagine people hitting each other at a Minnelli event? I mean, really? (Though I have heard that some queen once pulled another's weave out in an argument over a seat during the intermission of The Rinkback in 1984, this is unsubstantiated).

15. Human Rights reform and the immediate end of the War On Terror: President Minnelli would never brook the idea of torture or have a mess like Guantanamo Bay on her hands. A "kill list?" God no, she wouldn't hurt a fly. The war on terror could be easily resolved by instituting a policy of forced repetitive viewings of the 1987 film Rent-A-Cop, wherein a miscast 41-year-old Liza played Della, a high-class hooker with a heart of gold opposite an also miscast Burt Reynolds as a vice cop in one of his most laconic performances. The picture is not helped by the bizarre but hypnotic casting of Dionne Warwick as Liza's madam. Several days of mandatory Rent-A-Cop viewings alone could completely destroy a terror cell. Don't you agree that the mere act of connecting the heretofore disparate concepts of "Liza Minnelli" and "the war on terror" in the same sentence is irresistible?

16. Rebranding Mother's Day: In deference to the enduring legacy of Judy Garland the predictable "Mother's Day" would be rechristened "Mama's Day."

17. The end of partisan gridlock in congress: Just hand 'President Minnelli' a microphone, put Billy Stritch on the piano, and Republicans and Democrats alike won't just be crossing the aisle, but doing jazz runs in such perfect unison there will be no blue or red states, only purple. Why after hearing Liza belt out "But the World Goes 'Round," it is not hard to envision the once sour Mitch McConnell completely forget about obstructing the political process in order to organize republican senators in a perfect kick line. Listen, in a world where Donald Trump can, apparently, be president, is this so very hard to imagine? 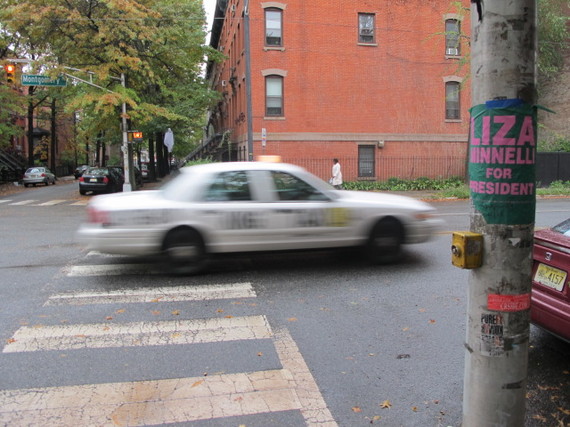 All that is left of my Cary Liebowitz "Liza for President" rain poncho. Photo courtesy of the author.

18. Voters will relate: Though it might seem counterintuitive that the daughter of Judy Garland who has been famous since the day she was born could be a candidate of the people, consider that every single thing that has ever happened to this woman has been a matter of public record, and that's quite a long list of things. There's something for everyone: Divorce! Professional reversals! Alcoholism! Success! Drug addiction! Recovery! Triumph! Failure! Comebacks! Rehab! Bankruptcy! And that's just the 1980s! As we all know, there are no skeletons in Miss Minnelli's closet, only Halstons.

19. Easy branding: Liza could run on an unassailable platform of survival. Is any message more universal or timeless? I mean, who's anti-survival? Like Jerzy Kosinkski's Chauncey Gardiner in a sequined pantsuit, all Liza would have to do is redirect any question to a simple survival metaphor, which could I could write in less time than it takes to sing "Liza With a 'Z'."