I suppose there are few fears that haunt us in the back of our minds more than becoming the hapless victim of that dreadful menace commonly known as cancer in all of its insidious forms and incarnations. Images of gaunt ashen looking patients with that sad far away look in their eyes make us cross our fingers or say a silent prayer: "God please never let it be me" -- and perhaps we might even try to negotiate some sort of settlement in advance. All the while we know the statistics are not in our favor and this has become more loudly pronounced with the volumes of information on the subject, which is now so readily available. Knowing too much does have its disadvantages as it adds a certain degree of trepidation to life and strips us of any lingering innocence that might have accompanied us into adulthood. We are left facing the stark reality that the axe might fall at any time and if it does, no amount of platitudes will be able to bring us comfort.

What one may not so easily anticipate is the proverbial axe falling on a loved one while you stand helplessly by wishing it could be you instead of them but knowing full well that you do not get to make that choice. And so it was when I learned that my beloved wife had an aggressive sarcoma tumor the size of a baseball in her right calf. To say I was blindsided would be grossly understating the situation. She is physically fit to the extent we initially thought she suffered a mere muscle injury from practicing yoga. Upon dismissal of this wishful thinking we were fast tracked into the surreal world of oncology with a blur of doctor appointments, second opinions, third opinions, hospital visits, operations, MRIs, CTs, lab tests, needles, IV poles, bags of chemo, pharmacies, to wit, a whole complex and somewhat intimidating array of goods and services designed to keep the monster at bay before it completely overcame and destroyed my wife's body. This is what they called our "new normal" -- a polite way of saying your life has been hijacked. 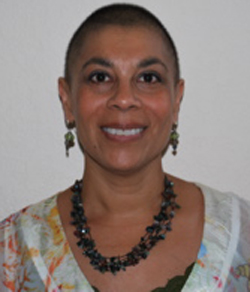 As I sat by and watched a third of my wife's leg disappear and be replaced with a painful fourteen-inch scar from her knee to ankle I could barely articulate an encouraging sentence or offer a measure of solace without willfully pushing through the fatalistic dense numbness that had enveloped me. Biology run amok was no longer an abstract theory. It was an unwelcome intruder in our lives and the results of its pervasive activities were very tangible and sadly inescapable.

But alas the surgery was only a short preface of what was to come. As I became schooled in the parlance of oncology I soon learned that everything after surgery is called "insurance". This involves a sort of scorched earth regimen of intensive radiation and chemotherapy treatments to kill off any malignant cells that might have migrated to other parts of the body and - in my wife's case - especially the lungs.

No doubt this risk management strategy is sound and was more or less agreed upon by the three opinions we garnered but actually going through it was, to say the least, grueling. Mental fatigue set in as I tried to convince myself that the large-scale use of lethal materials and methods would ultimately cure the incurable. I must confess watching poison being pumped into my wife's veins as she slowly lost her energy and faded into sleep required quite a fertile imagination to believe it was somehow a good thing. But there I was day after day watching, waiting and hoping that these treatments would pay off. The longer I sat next to her the more a sense of powerlessness came over me as I began to realize, for the most part, the situation and results were out my control. This was an affront to my innate maleness that always wants to provide a solution and fix problems without asking for help or directions.

The radiation part of the twofold package brought it's own set of frustrations. Overall there was the unavoidable cold sterility that one comes to expect in medical environs. It was especially disconcerting to watch my wife being rolled into the gapping mouth of a machine centrally located in an otherwise barren room. She seemed so small and alone as I peered at her through the glass. There was a wintry feel to the whole affair. I wanted to hold her and keep her warm but there was only room for one.

As the days turned into weeks the soft olive colored skin on her leg became burned, blistered and marred. She desperately tried all manner of medications, lotions and potions to alleviate the pain and keep the skin moist but these proved to be feeble remedies in the face of the powerful nuclear rays relentlessly violating her. Reluctantly we resigned ourselves to the inevitability of it all.

As this monotonous process unfolded, there were no visible signs of her condition except those hidden from the view of others. I knew this had abruptly changed the day I heard sobbing from the shower and rushed in to discover my wife's hands filled with clumps of her thick black hair. With tears streaming down her cheeks and shaking uncontrollably I assured her she would be just as beautiful to me without it. And then I fell silent and held her tight because sometimes words take up space where they don't belong.

Losing her hair was the most devastating violation of them all. It was a direct assault on her identity. She had bald patches on her head here and there until it was almost gone. Eventually it was shaved bare. Looking in the mirror she struggled to see herself behind the missing pieces.

Although sapped of energy we forced ourselves to shop for hats, scarves and wigs until quite a collection was accumulated. It is not an exaggeration to say that my wife became the fashionista of the clinic and somehow effortlessly pulled off the cancer chic look that became all the rage with doctors and patients alike. Little did they realize underneath it all a difficult grieving process was going on as she mourned the loss of something more than hair - she would never be a "before cancer" person again.

Having finished the initial treatments we are now in the surveillance stage of this arduous journey. They tell us five years of clear MRIs and CTs and we will finally be able to utter a sigh of relief.

Enough praise and lauding cannot be lavished upon the stellar medical professionals who patiently gave me a crash course in biology and physics as they painstakingly explained in detail the daunting process and answered a myriad of questions in an attempt to ease my worried and wearied mind. Not to mention their kindness and gracious manner as they tended to my wife's care through the long marathon that is part and parcel of effective treatment.

Admittedly while we were being battered about and deeply bruised by this unexpected storm it was difficult to come to terms with the naked reality of our own vulnerability. In the midst of our darkest hours it was the compassionate care of family and friends that reminded us what it is be human. There is an inestimable value in being surrounded with loved ones when the stakes are life and death.

We celebrated our twenty-eighth anniversary trapped in that chemo treatment room. As we quietly sat hand-in-hand staring out the window I recalled the words of the English writer Jerome, "Nothing is more beautiful than the love that has weathered the storms of life." Knowing the price of beauty I shed a silent tear.