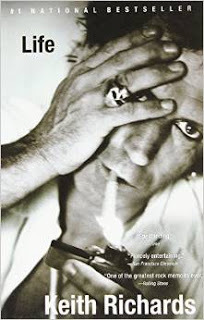 Some people are content to satisfy their appetites and there are others for whom, appetite and satiety aren't enough. Ambition may produce rewards but the net result is an utter emptiness as if all the work they had put into their success were simply a sales pitch for something that didn't exist. What is it actually like to be at the top of the heap? There is probably no more famous rock band than The Stones. Keith Richards wrote about being a Stone in Life. What is it like to be Mick Jagger at 72 and facing yet one more tour with thousands of fans cheering wildly? How different his experience is from the would be rock star hard put to get one gig in a down at its heels bar, whose patrons, swilling down their doubles barely acknowledge his or her existence. Their only company at the end of a long night of sets, in which they're essentially singing to themselves, is the beaten up cases in which they walk home with their instruments. Remember Anthony Quinn who played the over the hill boxer, Mountain Rivera, in Requiem for a Heavyweight? The forgotten, those who have lost the lottery are always seeing the reflection of neon bar signs on rain slicked streets. Yet Amy Winehouse whose life was the subject of recently released documentary is an example of the talented, recognized person who seems to have everything and then throws her life away. Was it that she made it to the top and was disappointed to find that there was nothing there?