In my continuing quest to learn Spanish, I've developed a technique I use when we go out to eat. If I suspect that our server may speak Spanish, I'll ask "¿Habla español?" If he or she says "Sí," I say, "Estoy aprendiendo. ¿Me puede ayudar?" ("I'm learning. Would you help me?")

Invariably, the answer is "¡Claro! (Of course!)," and then we not only have a conversation in Spanish, but we all have more fun, too. Life is sweeter when you can live it in a second language.

Because it has taken me almost eight years to become marginally conversational, I now understand how immigrants can live in the United States for decades and still not be comfortable speaking English. Like me, they are living their lives in their first language--at work, at home, at church, in the neighborhood. Although they live in a sea of English here in America, they often don't get many chances to practice speaking English.

Back in Florida, where I normally live, I was tutoring a young man from Mexico as part of a program that the Literacy Coalition of Palm Beach County organizes. I asked him why he wanted to learn English. He said, "To get a job indoors."

He went on to explain that in his job as a landscaper, he worked with fellow Mexicans and they spoke Spanish all day. He wanted a job indoors where he could practice his English, while still getting paid. (Eventually, he did get such a job, working at a carpet store.)

I've been living in Palo Alto this year, doing a stint as a Fellow at Stanford's Distinguished Careers Institute and conducting research on my book on bilingualism. I've also been volunteering in a program called Building Skills Partnership, in which tech companies in Silicon Valley support the teaching of English to their janitors. On Monday afternoons I go to Facebook headquarters, where I am badged and escorted to a conference room where a dozen janitors, women and men, are waiting. While the ESL (English as a Second Language) teacher runs the session, I work one-on-one, with students who need extra help.

I sit next to them as they struggle to pronounce "waste basket" and "school" (without saying "eschool" due of a lifetime of saying "escuela"). I see their hands grasp pens awkwardly. I remind them to start the sentence with a capital and end with a period. They work hard for an hour and a half. They are paid for the first half hour; the next hour is on their time.

Like nearly all of us, these folks juggle lives busy with families and work. Plus, many of them had their schooling cut short. In Mexico or El Salvador or Peru, they might have left school after completing only the third grade and thus often have trouble writing in Spanish, let alone in English.

When asked on bilingual surveys why they want to learn English, their first answer is always the same: "To help my child in school. (Ayudarle a mi hijo en la escuela.)"

The immigrants in the Building Skills Partnership program are the lucky ones. 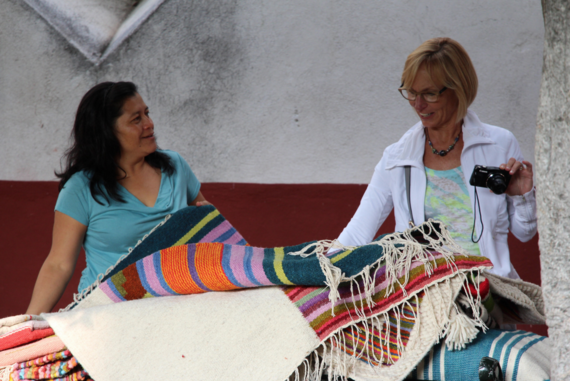 For millions of Latino immigrants, the best English speakers they have close contact with are often their own children, and learning from your children has, of course, its own issues.

When immigrants do have the chance to have English conversations with adults, the conversations can be stressful because they are with bosses, doctors, or their children's teachers. It's rare that they have the opportunity to just sit and converse in English with other adults where nothing is at stake, and where all they have to do is engage in that sweet struggle that language learning is.

The janitors I work with at Facebook appreciate the opportunity. I see it in their faces when I praise their work. I hear it in their voices at the end of class when they say, "Thank you, teacher."

As class is wrapping up, I tell them I'm studying Spanish and it's a struggle for me. This pleases them. I know they could help me, but that's not why we are there. Instead, I attend, with my wife, a weekly Spanish class in Continuing Education at Stanford, with one teacher and some 20 students. I also go to a Meetup at a local coffee shop where gringos like me go to practice their Spanish. But the only time I have a real conversation with a Spanish-speaking native is once a week when I hire a tutor.

With all the millions of Latino immigrants and millions of English speakers wanting to learn Spanish why, don't we have more conversations together? Why can't we speak Spanish for 30 minutes and then English for 30?

I can envision such language exchanges across the country at public libraries, at churches, at YMCAs and at businesses. But I also understand some reasons why such conversations don't happen.

Spanish-speaking immigrants and native English speakers don't often hang out together. There are social distance issues, and cultural differences. We often live close to one another as the crow flies, but in very different worlds.
Even if we did come together, wouldn't we need some guidance, at least to start?

I don't have the answers, but it's clear that millions of English speakers and Spanish speakers would benefit from speaking with one another. And who knows what other things we might improve in America, once we start talking?