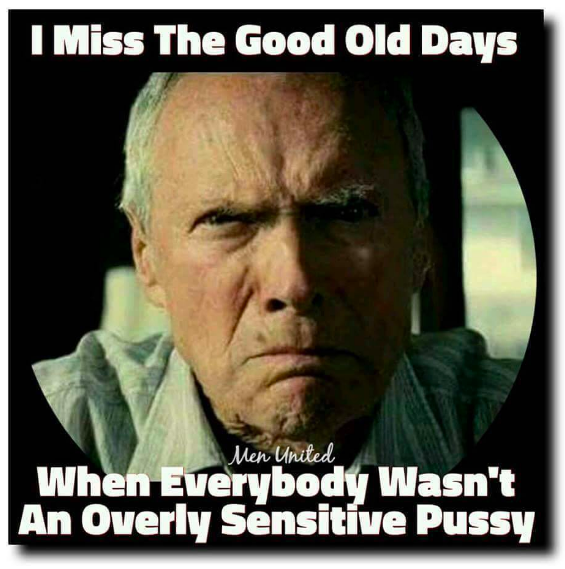 Before I lived here, I shared the stereotype that many Americans have of San Francisco, that it is run by pushover liberals.

Lo and behold, I have come to learn this stereotype is wrong. San Francisco is run by Dirty Harry, enabled by ambitious liberals who care more about the next office they can attain than the people of San Francisco.

Abundant evidence makes it clear that it is currently impossible in San Francisco to call 911 and have peace of mind that the officers who respond will be free of racial bias and ethical.

To be fair, many, perhaps most, SFPD officers are fine, but there is an overarching cultural problem with SFPD that allows bad officers to act without accountability.

In all the other places I have lived- even New York City with NYPD's challenges- I have never felt that I could not have confidence in the police.

Despite NYPD's many instances of brutality, a popular movement to remove its Chief has not taken root in New York City. This is because the tremendous power of NYPD is held in check by civilian oversight. I served in the Giuliani and Bloomberg administrations as Director of Internal Review and Assistant General Counsel of a City agency, among other roles, and observed how civilian oversight functions closely.

San Francisco has been my home since 2012 and I love it.

I was blissfully unaware of the problems of SFPD until December 2nd, 2015, when a young man I mentor posted a video of SFPD executing Mario Woods firing squad style on my Facebook. It looked like a scene from the Spanish Civil War only it took place right here in San Francisco six months ago.

I attended a vigil for Mario on December 3rd, 2015 and soon became active in the Justice4Mario Woods Coalition.

Since then I have spoken with Mayor Ed Lee personally twice, and testified at Police Commission meetings, Board of Supervisors meetings, US Department of Justice listening sessions, and Blue Ribbon Panel hearings.

I have learned that under Chief Greg Suhr's tenure, SFPD has killed 21 people, at least four of which involved a very rapid escalation and/or excessive use of force: Alex Nieto (shot 59 times, police opened fire within 2 minutes of arriving on scene), Amilcar Perez Lopez (shot 6 times in the back), Mario Woods (shot 20 times), and Luis Gongora Demetrio Pat (shot 7 times, police opened fire within 22 seconds of arriving on scene).

Police unions throughout California have tremendous political power that has resulted in legal protection in addition to union protection. A jury decided 59 bullets was not excessive use of force in Alex Nieto. The officers who killed Mario in December returned to work in January.

They all rubberstamp Chief Suhr, who is beholden to the SF POA, despite the tremendous work of the Justice4Mario Woods Coalition, Justice4 Alex Nieto Coalition, Justice4 Amilcar Perez Lopez Coalition and the #Frisco5 hunger strikers presenting overwhelming evidence that Chief Suhr is responsible for SFPD's culture that is harming the people of San Francisco.

Supervisors Jane Kim, John Avalos, David Campos and Eric Mar had the good sense on May 12 2016 to call for a search for Chief Suhr's replacement. Rumors abound that Chief Suhr is planning to retire in August 2016 anyway because his new wife will vest his pension benefits then.

But to send Chief Suhr off with a party and a gold watch would send the wrong signal to SF POA.

Presumably electeds and appointeds stand by Chief Suhr because to remove him would be an admission of liability in current litigation against SFPD that would increase the likelihood of plaintiffs prevailing and higher awards.

But I ask, what has more value, human life or money?

More life will be lost unless SFPD changes its culture.
And all citizens should be able to call 911 with confidence.

To change the culture of SFPD, Chief Suhr must be removed and a new leader appointed who knows how to run a modern, accountable police department, is not beholden to SF POA, and has the full force of the Federal government supporting his or her accountability agenda. We also need a new Inspector General who continuously audits SFPD.

Why Does San Francisco Need a New Police Chief?

Recently I published San Francisco Needs A New Police Chief detailing the reasons why Chief Greg Suhr is no longer the right person to lead SFPD.

Every day since, new developments made it clearer than ever why San Francisco needs a new Police Chief NOW, the first of many steps needed to make the rogue, racist, violent SFPD accountable to the people of San Francisco.

On Friday May 6, 2016 to make it seem that SFPD acts quickly to discipline officers for racism in light of the 2016 racist text scandal, SFPD issued a press release that said that in February 2016, a member of SFPD had been reported by two other members and was being disciplined for using "inappropriate language" that "had sexual and racial undertones. In line with Department policy and the Not on My Watch initiative, the "witness" members reported the conduct. An investigation was initiated immediately and the involved member was disarmed and reassigned to a nonpublic contact position as the investigation moved forward."

Sounds good, right? Officers doing what they are supposed to do and SFPD acting on it.
The reaction this announcement provoked says everything about what is wrong with SFPD culture. On Saturday May 7, 2016 former SF POA President Gary Delagnes expressed his views on this matter on Facebook: 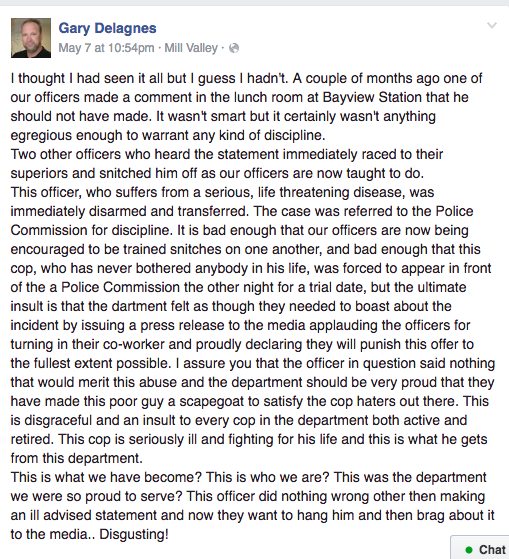 I recommend reading the comments on Delagnes post, which are highly instructive. Among them:

According to his security firm's website, Gary Delagnes has the full endorsement of Chief Greg Suhr (as well as Lieutenant Governor Gavin Newsom):

On Monday May 9, the Blue Ribbon Panel appointed by District Attorney George Gascon to investigate SFPD racism in light of the 2014 texting scandal held its final hearing. In 2014 a federal investigation of SFPD fraud uncovered racist text messages exchanged by officers. These messages were reported to Internal Affairs, however, because the federal investigation was going on, Internal Affairs did not investigate the racist texts at the time. The officers who were not implicated in the fraud investigation were allowed to keep their jobs because the statute of limitations ran out before the texts were investigated.

Because racially biased officers can be barred from testifying in court, the DA needs to know the extent of racism at SFPD and appointed the Blue Ribbon Panel of retired judges to find out. The judges in turn recruited pro bono lawyers from the finest law firms in San Francisco to investigate every aspect of SFPD operations, including Hiring; Background Investigations; Training, Use-of-force and Officer-Involved Shooting Investigations; and Internal Affairs.

The pro bono lawyers found that in every aspect, SFPD demonstrates racism, is not transparent and lacks accountability. There is no oversight nor auditing of its functions in any meaningful way.

That means that the Mayor, Board of Supervisors, and Police Commission all are failing to provide oversight of SFPD, the job we elected them and pay them to do (Police Commission is appointed and not paid).

Here is a summary of some of the lawyers' findings, the final report will be issued by the judges in a few weeks:
· Culture
o Officers disagree about whether there's a culture of bias (which in and of itself, means there is a biased culture)
o The POA and SFPD are viewed as the same
· Hiring
o Hiring and promotions are highly discretionary, leading to high potential for bias and favoritism
o Background investigations of recruits are conducted by retired SFPD officers without any clear procedures
· Internal discipline
o There is no transparency in the disciplinary process
o There is no tracking of disciplinary outcomes
o Disciplinary guidelines are outdated
· External Oversight
o No entity regularly audits the SFPD
o In the wake of the texting scandal, no oversight body attempted to determine whether there was systemic bias within the department
o Office of Citizen Complaints rarely result in disciplinary consequences, and when they do, the discipline imposed is almost always mild
o San Francisco is not as transparent about officer discipline as it could be, even after accounting for state law restrictions

On May 10, in response to the report, Mayor Lee announced a $17.5 million package to change the culture of SFPD, including introducing tasers.

If Mayor Lee thinks he can address the culture of SFPD with money and no leadership change, he does not know enough about organizational culture to run a major city.

That same day Mayor Lee attended the Board of Supervisors meeting where he was peppered with questions he couldn't answer about SFPD and reiterated his stance that he stands by Chief Suhr.

On May 11, four of the 11 supervisors announced that they are supporting the launch of a national search for Chief Suhr's replacement.

On May 18, a new story broke of an SFPD officer who blew the whistle on police misconduct and alleges she was forced into early retirement.

That same evening a group of UCSF doctors shut down the meeting of the San Francisco Police Commission, demanding that they discuss SFPD's killings as a public health crisis in San Francisco.

As I went to press with this post, at 10 am this morning, May 19, another SFPD shooting occurred. The victim is in critical condition.

How can this mess be fixed?

June 2, 2016 will be six months since SFPD executed Mario Woods. No one has been held accountable and until last week with the announcement by the four Supervisors, not one public official has acted boldly to change SFPD culture.

Meanwhile discontent with SFPD, particularly but not exclusively in communities of color, grows stronger by the day. Tepid appeasements are not going to satisfy the community.

Mayor Ed Lee or the San Francisco Police Commission needs to appoint an interim Chief as soon as possible while a national search is conducted for a new Police Chief. The community needs to be involved in defining the criteria for and selecting the new Chief. Criteria should include extensive experience with:

The new Chief must pledge to train SFPD to adhere to President Obama's 21st Century Policing Task Force Report and follow all its recommendations.

Attorney General Loretta Lynch needs to suspend the COPS collaborative review of SFPD and instead send the USDOJ Civil Right Division to conduct a pattern and practice investigation to reorganize SFPD under consent decree. The current review of SFPD will result in recommendations that local oversight will have to enforce. That is clearly part of the problem. We need a federal judge to ensure that the changes recommended by USDOJ actually occur.

The SF Police Commission needs to implement a clear, easy to follow Use of Force policy with community input, pledge to discipline officers who violate the new policy, and not adopt tasers. Part of the problem is SF's Use of Force policy was adopted in 1995. A few things have changed since then.

The SF Police Commission needs to flex its muscle and remove officers identified by the community, the interim and new Chief and the US DOJ Civil Rights Division as resistant to a culture of courtesy, professionalism and respect. This is crucial so that all the good officers can do their jobs.

The Board of Supervisors needs to create an Office of Inspector General of SFPD, modeled on the office in NYC, to continuously audit and analyze SFPD and make recommendations. We need accurate, impartial data to make good decisions.

After these changes have been implemented, and problem officers removed, and elected and appointed officials continue to provide oversight of SFPD with community input, then citizens of San Francisco will be able to call 911 with confidence.