Scroll down for photos and video.

Aldi Rizal can barely speak, but he knows how to ask for a cigarette. The two-year old Indonesian boy is best known as "the smoking toddler," a moniker he earned when video of him chain-smoking cigarettes hit the web this spring, shocking viewers all over the world. So where does this story stand six-months later? Well, there's good news and bad. The good: Aldi has since been to rehab and kicked the habit. The bad: There are countless other kids out there, just like him. I traveled to Indonesia to meet Aldi a few weeks ago. His family lives in a small fishing village in a remote region on the island of Sumatra. Getting there wasn't easy: 36-hour trip from New York to Jakarta, 1-hour flight to Sumatra, and four hours in the car, driving through rubber tree plantations. We met up with Aldi in the market before heading to his home. He's a local celebrity -- as he walked through the stalls we heard lots of people calling his name, "Aldi, Aldi." A crowd gathered around him when he stopped to eat. But Aldi's famous for all the wrong reasons. The toddler started smoking at 11-months old, and within five months he was up to four packs a day. When Aldi's smoking video went viral, local government officials reached out to help, paying his way to the capital city of Jakarta where he received five weeks of intensive treatment with the National Commission for Child Protection. Aldi had to quit cold turkey, and his mother says he threw terrible tantrums. The nicotine withdrawal must have been brutal for the little guy. But he got through it and started play therapy, where he could focus on just being a kid.

PHOTO GALLERY
Kids Smoking in Indonesia
Sadly, Aldi's not the only smoking kid in Indonesia. The south Asian country has one of the worst problems with child smokers in the world. Government figures estimate that 25% of kids over the age of three have tried cigarettes, and 3% are regular smokers. 3% might not sound like much, but remember, these are kids over the age of three. That means some kids are lighting up before they even start school. My team had no trouble finding smoking kids in Jakarta. We came across a group sitting near a river bank enjoying an after school cigarette break. One of the kids, nine-year old Ipan, has been smoking a year. "I feel good when I smoke", he told me. The youngest kid we met was Cipto, five-years old. His mother doesn't only know he smokes, she does it with him. When we met Cipto he was sitting right next to her, both puffing away. So why is this happening? Mainly because of a lack of regulation. While I was doing research for this story, one of my contacts described Indonesia as the "Wild West" of tobacco regulation. There are virtually no restrictions on cigarette advertising on TV, radio, in print or on billboards. Tobacco companies sponsor all kinds of cool things believed to appeal to kids and teens, from sporting events to music concerts. Cigarettes are cheap (about $1 per pack), and easy to get; we saw a ten-year old walk right into a store and simply buy them, no questions asked. The largest tobacco company in Indonesia is American-owned Philip Morris. For this story I spoke with their External Communications Director, Anne Edwards, about the problem. She said Philip Morris doesn't want kids to smoke, they only want to lure adult smokers from their competitors. She also said that the company supports stronger regulations and restrictions in Indonesia. She seemed genuinely disturbed by the footage I showed her (you can see some of it in the video piece here). For it's part, the Indonesian government passed a health law in 2009, with some good elements of tobacco control. But a year later, the measures haven't been implemented yet. Aldi continues to be smoke free, though he's gained a whopping 13 pounds since quitting, and still has cravings. The boy who's still learning the most basic words knows these well: "Mom, I want a cigarette." 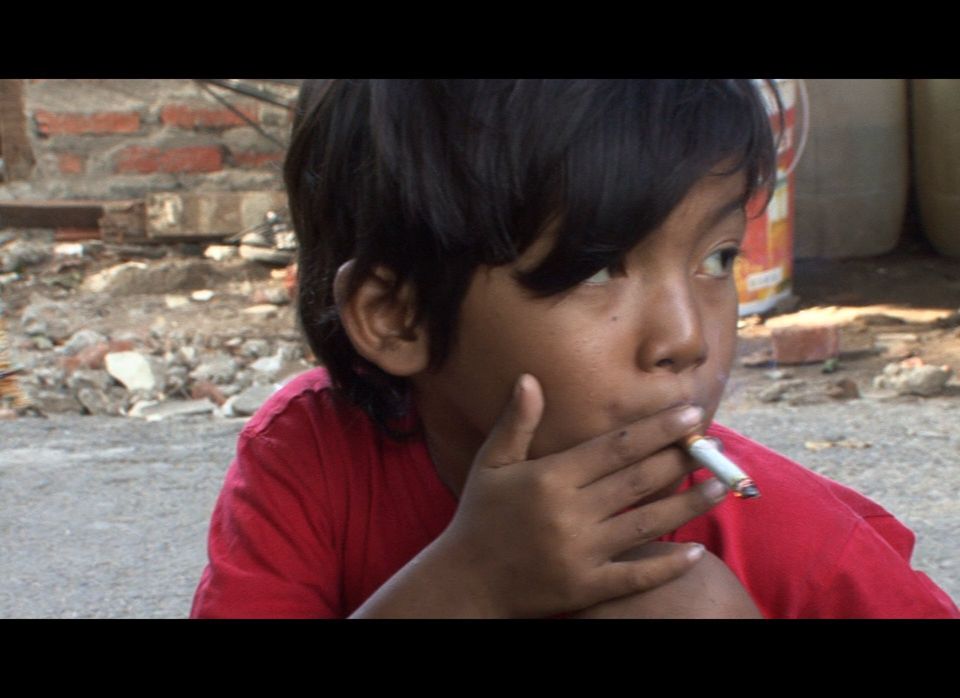