The night he won the Total Nonstop Action title, Drew Galloways was "running on less than empty." One of pro wrestling's top international talents, Galloway returned from a multi-country tour, arriving in the U.S. just hours before his career-defining victory on live television. Now the Scotsman hopes this chaotic global schedule defines his reign as TNA World Heavyweight champ.

"I always wanted to be the first traveling World champion since Ric Flair," shared Galloway during a telephone interview promoting his June 12 clash with "The Destroyer" Bobby Lashley at TNA's Slammiversary pay-per-view and a live Impact Wrestling broadcast the following Tuesday. 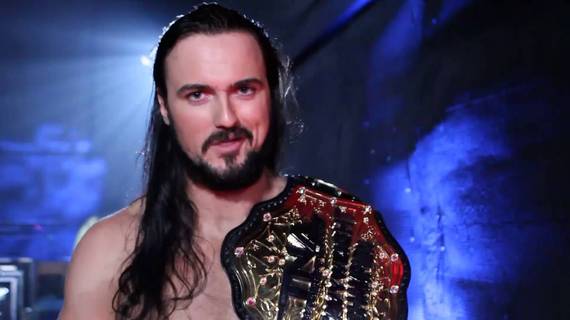 Before cable conglomerates like TBS and USA Network allowed the world to simultaneously watch weekly broadcasts, creating titans like World Championship Wrestling and then-World Wrestling Federation, pro wrestling was largely a network of small promotions. Legends like Bruno Sammartino, Harley Race and Flair earned the right to call themselves "World champions" by traveling state-to-state, country-to-country defending their titles against the best in each region.

It's a model Galloway remembers -- and aspires to bring back as TNA champ. Said Galloway: "That was always my personal goal, to be that champion who jumped from territory to territory."

"When I first got the World title, that was the first thing to pop in my head. Here is my opportunity to achieve that goal I had all along," continued Galloway, who captured the TNA title on a live Pop TV broadcast March 15. "I have that opportunity now, to go to all these territories and build my brand, which builds the TNA brand in turn."

"Hopefully they will check out the TNA product and become a fan and tell somebody else," he went on to say, "That's how opinions change and audiences grow."

According to Galloway, TNA's penchant to prerecord several weeks of television at a time -- though allowing the internet to release spoilers in advance of broadcasts -- benefits the goal. In-between TV tapings, he acts as an "an ambassador and the champion," venturing to "companies that have the buzz, bring the title and get people talking." 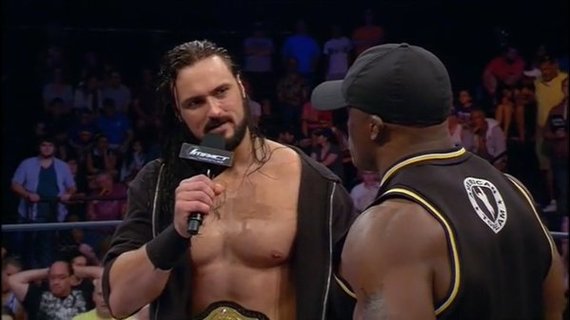 It appears to be working. Since Galloway won the TNA title, viewing numbers for the company's weekly Tuesday Impact Wrestling broadcasts on cable home Pop TV (formerly the TV Guide Network) have seen a steady uptick. The champ says it's because the entire roster, which has admittedly taken a hit in recent months with the loss of major names, is unified.

"I genuinely believe the product we're doing right now, especially the last few months on Pop TV, are the best we have done since I joined the company," he pointed out. "Everyone's working their arses off. We're working toward one goal, and creative is giving us some great material to work with.

"The proof's in the pudding," Galloway opined. "Wherever I travel, the same people that said negative things before are now saying positive things. The more we keep putting out a positive product, stand by it and work our arses off, eventually things will turn around."

To keep things fresh, TNA is developing new acquisitions like "The Miracle" Mike Bennett, his wife Maria Kinellis and upstart Braxton Sutter. Meanwhile, staples like Ethan Carter, III, and feuding brothers Matt and Jeff Hardy -- all past World champions -- are turning out some of their best work yet. And Galloway himself is facing a new challenge as well: Lashley.

The main event has been building for months -- and is a match fans are anxious to witness. The reigning champ praises TNA creative for "not giving it away on TV," allowing it to escalate to epic proportions heading into the company's biggest night of the year.

"We've had such a good time with each other. We're trying to create some compelling TV," said Galloway of his Slammiversary opponent. "We're excited for the pay-per-view and trying to steal the show."

For Galloway's aspirations to defend the TNA title around the world to continue, he must survive this Sunday. Playing to two-time former TNA champ Lashley's MMA history, the title match must end via tap-out or knockout.