"What if I actually made the team?", "I could go to the Olympics". I'd always loved sports and the Olympics were something I thought about often as a kid but those dreams felt like a lifetime ago. But hold on, I was getting ahead of myself. I had to qualify. To be honest, I'd never seen a bobsled up close and never watched a race. Why was I even considering this? I guess I liked the challenge. Even if I didn't make the team, it felt like an injection of adrenaline into what had become a very routine lifestyle.

I was in LA two weeks before the try out; I had just finished my Executive MBA program at Pepperdine and was in town for graduation. While the rest of my classmates were accepting promotions and positions with new companies, I had my head in the clouds. My mother was kind enough to dig through dust covered trash bags of my old high school uniforms, cleats and trophies to unearth my track spikes, I guess it is a good thing I save everything.

With a week and half to go I spent a few days alone at the track across the street from my apartment in Denver trying to make sense of what I was about to ask of my body. The email I had received, from The USA Bobsled Federation, stated that I'd have to do a sprint, a broad jump and a shot toss, called a Combine. After doing a few awkward broad jumps, Ouch! I realized just how long it had been.

I moved on to the two handed shot toss and then the sprint. I had competed in the 100-meter sprint in high school so I figured 45 meters wouldn't be so bad. I was wrong. I paced out the distance and went for it. My first run through felt like an eternity and it definitely didn't feel like I was moving very fast. It was clear I had my work cut out for me and I didn't have much time.

The day of the combine was soon upon me. I drove the hour and twenty-minute drive from my apartment to a hotel in Colorado Springs the night before. I packed a lunch, brought a gallon of water and a bunch of other stuff that I didn't end up using because I didn't know what to expect. I parked my car on the training center campus and found my way to the shuttle where two others were waiting.

On the ride over to the track, one of the athletes said something about summer vacation. I asked her where she went to college. The school she mentioned I had never heard of; I quickly realized it was because she was talking about a high school. She was 17 years old and I was almost twice her age. As the shock wore off I wanted out of that van and back in my car, by then it was too late. We had arrived at the track; there was no turning back. As we walked to meet the rest of the group my phone began to vibrate. It was my friends in Denver asking if they should make the drive down to cheer me on. With the realization that I was going up against athletes who were much younger than me, some of them teenagers, I told them not to worry about coming.

As the morning went on, I continued to feel more and more out of place. EVERYONE else did what I now know to be a proper track warm-up, but as a former volleyball player in college, that wasn't a part of my warm-up routine. I did a couple laps, stretched my legs a few times and waited for things to get started.
I did my first sprint and actually felt pretty good about it. I returned to the group with a bit of old my confidence back when I was hit with the news that the timer had malfunctioned and did not record a time. Not taking enough time to recover before my second attempt, I took off for my second sprint. My second run through felt like a night and day difference from my first attempt and my time reflected that feeling. An onlooker pulled me aside to let me know that I was slowing down before the finish line and it was negatively impacting my time.

To avoid making the same mistake, I opted to complete the other two parts of the combine before sprinting again. At the end of day they tallied up our scores and told us that if we scored high enough, we would receive an email inviting us to a push camp at the Olympic Training Center in Lake Placid, NY. I got a ride back to the training center, took a quick picture in the Athlete Center to prove that I had been there and then headed for home. 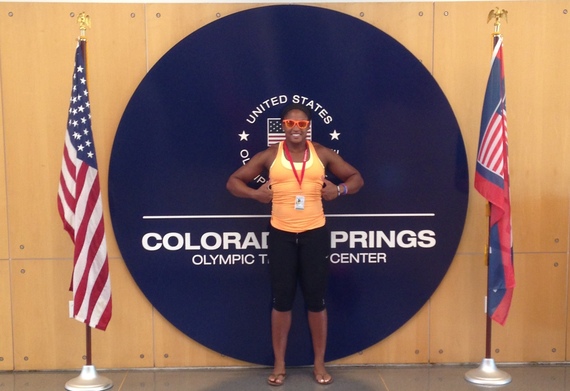 I went back to work that Monday like any other day. The week went by and I had not heard anything from the Bobsled organization, so I figured I didn't make the cut. I'd just joined a men's apparel startup based in San Francisco called Trumaker as the regional sales director. The whole management team was planning to attend a three-day meeting at headquarters and I was looking forward to this new business venture. I pushed bobsled from my thoughts... until I got this.

I read the email a few times to make sure I understood what it meant.
1. I had in fact made the cut.
2. I was invited to push camp.
3. The camp was in two weeks.

Oh Boy! After the shock and confusion wore off, fear set in. I kept the news to myself for a while, I was worried my friends and family would try and talk me out of going. "You really think this is a good idea? It's terrible timing and you're too old." Before I knew it, I was online researching flights. An hour later, I had a flight booked to Lake Placid, New York and had to find a way to tell my new boss that I needed a week off. It was a once in a lifetime opportunity. I had to see where it would take me; I've never been one to shy away from a new adventure or challenge.

How We Live: Wellness Challenge lifestyle Fitness and Exercise Sports