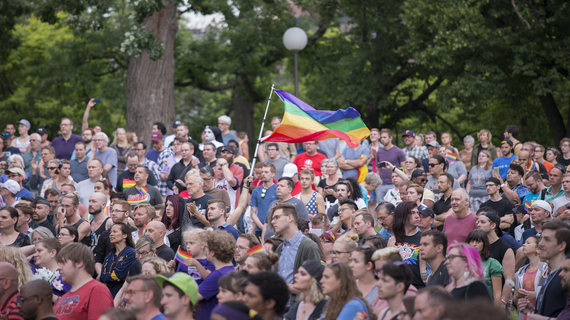 On the continuum of LGBT haters, they spew the worst anti LGBT post tragedy bile imaginable with such Godly views as: they deserved it.

WB is apparently "Orlando Bound" to protest, as they often do, at local funerals of victims of the Pulse tragedy.

It goes without saying but it takes a special kind of broken, I'd suggest mental illness, to vomit hate on the grieving.

But here's the thing, Westboro Baptist or any anti LGBT individual or hate group, you're coming to my town. These are my people.

Your kind is not welcome here there or anywhere across our nation. You are the fringe, the true Left Behind, the outlier.

Our Orlando churches, many who stood in the way of same-sex marriage and who continue to pit God against gays, never set foot into your language. They grapple, they do not gouge out hearts.

Their version of God might tell them (sadly) that the LGBT community doesn't deserve civil rights and protections. Still, their God, Muslim, Christian or otherwise, doesn't command them to stomp on the mourning.

My Central Florida community is filled with bridge builders. This is who we are. This is what we do. Our local LGBT community has led the conversation for decades.

Cheers to Orange County Mayor Teresa Jacobs for her warning to funeral protesters: "If that happens we will not leave their presence unchallenged."

Westboro, it's best you turn that bus around because love and grief make for swift and determined justice.

I'm not suggesting violence. I never suggest violence, which the rational know begets...

I'm saying funeral protesters will be legally banned. Westboro knows this is likely and yet emboldened by a perverse sense of religious righteousness, they dare to come anyway.

But Westboro protesters will be surrounded and outnumbered. Calmly. Swiftly. Love advocates will stare protesters directly in the eyes, into the windows of the soulless. Unflinching. Many will say nothing.

It may not feel like much of a triumph in the wake of our community's worst tragedy made more painful by Westboro's verbal assault on the grieving.

But we are indeed winning.

More of Us, than You.

My blog Mind Over (Matter)s