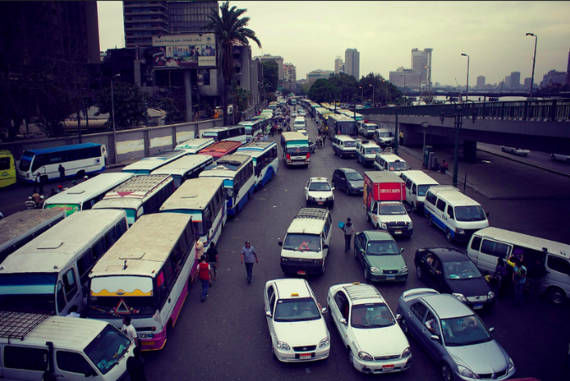 Khaled, an incredibly kind and proud Palestinian taxi driver, often drove me wherever I needed to be while I was living in Cairo. He was recommended to me by the landlord who I was renting my "desert abode" from in New Cairo. I call it a desert abode because it was literally in the middle of the desert, with only massive, vacant buildings around it.

I had been living in Maadi, an expat-filled neighborhood with a wonderful roommate, but the noise from late-night traffic had become unbearable. I moved to New Cairo, where I was among one of two people who lived in my building, even though I never saw the other student that lived there. I am quite sure the hallowed out sculptures of buildings around us were empty, with only Bedouin spirits creeping through them in the night.

Except, there was one barren floor across the way, overlooking my window and into my small studio room, which was no longer empty after a few weeks. A homeless family moved in, perhaps thinking that the other buildings were also entirely empty so no one one notice. After I received a huge shock while I was walking around post-shower, it was a miracle that the water was actually running and not ice cold, I noticed wide eyes peering at me from the dilapidated window. Someone quickly shirked back into the shadows and the very next day a piece of worn, old cloth was hung up along the window so I couldn't see in, and so no one else could technically see out. 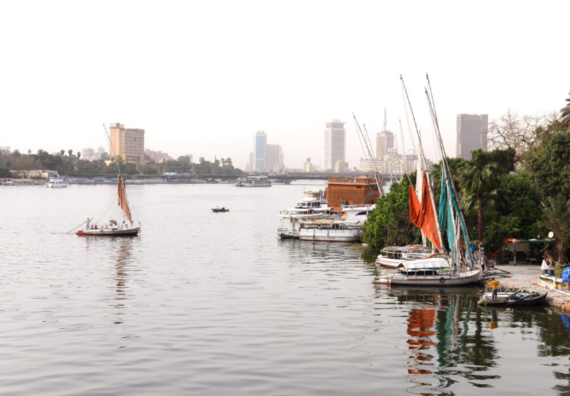 When Khaled would pick me up from my desert abode, so I could take an afternoon off from my research and actually experience my beloved Cairo, I would frequently head to two of my favorite neighborhoods, Maadi or Zamalek. He would blare Enrique Iglesias, "I Like It" and would suddenly turn down the music incredibly low, perhaps beneath the vibrations of a whisper, whenever we would pass the Cairo Necropolis. Then Khaled would enthusiastically twist the knob back up to sing along to his favorite music as soon as the tail of the car passed the last wall of the immortal grounds.

Khaled was incredibly animated and always had a huge smile on his face. He would tell me Palestinian tales and how he thought I should never trust someone from Israel, or how I honestly shouldn't trust Egyptians for that matter. He insisted that I resembled a daughter of the pharaoh's, which led me to believe that I should stop wearing so much winged eyeliner, and that I should always be extremely careful.

In fact, Khaled was so concerned with my safety that he frequently tried to talk me into purchasing a taser, and even stopped in front of numerous shops where I could purchase one on several occasions.

I trusted Khaled to a great extent, as he would often drive me home late at night, while the moon was out and the smog would begin to fade as we moved from Old Islamic Cairo to New Cairo. I always sat in the back of his taxi filled with Palestinian stickers and scarves, which is what all women typically do in Cairo, both for safety purposes and because of cultural expectations.

I generally fell asleep as I do in all modes of transportation, whether it's a motorcycle, tuk-tuk, desert truck, airplane or barely functioning automobile, and would wake up only when Khaled would turn around and tap on the back of the seat in front of me. He would say, "Miss Whitney, you can sleep here but your bed is calling you!" or "Did you dream of Tennessee?"

I always felt like Egyptians constantly want to know what you are thinking, as they are a very interpersonal society and some might even argue that they are perhaps very bad at keeping secrets because they are so engaged in their families and communities. It is often said that even the Egyptian regimes of Mubarak and Morsi were quite bad at letting secrets slip, or they could never get all of their stories entirely straight! Though Khaled was Palestinian he was quite similar to many wonderful Egyptians I knew, regarding his great interest in my contemplative silence.

After Khaled would wake me I would occasionally exclaim, "Ah yes! I always dream of Tennessee, but you know there I cannot find such good Egyptian food", which would leave Khaled laughing until his sides hurt.

He always commented on the fact that I loved food so much and found it hilarious that I had endless snacks in my purse such as bananas, bottles of water or juice, fresh figs and dates, homemade sandwiches, trail mix, Egyptian sweets, and gummi bears. I would always offer some to him and he would take just a small piece or tiny handful while saying, "to keep my energy for when I return to my love, Palestine."

The last time I was in Cairo Khaled's mobile number was not working and I am no longer in contact with my previous landlord in New Cairo, for unfortunate reasons concerning being extremely overcharged for a room I was hoping to rent once again, as I finished my graduate studies at the American University in Cairo.

It is disheartening to know that I will probably never see his fatherly face again, with his soft brown Palestinian eyes and large contagious smile, nor hear his chortled laughter which he could never contain no matter how hard he tried.

Whether or not I am in the Middle East and North Africa, every time I get into a taxi I think of dear Khaled and his admirable determination, as well as his great kindness. I only hope that he has made it back to his beloved Palestine, where he left his heart and much of his happiness.