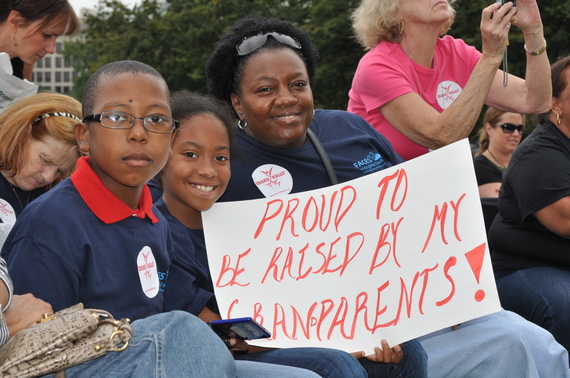 Today, people are so disconnected that they feel they are blades of grass, but when they know who their grandparents and great-grandparents were, they become trees, they have roots, they can no longer be mowed down. Maya Angelou

In otherwise contentious and turbulent times, Congress is coming together to support a fundamental American value--family. The Family First Prevention Services Act of 2016 passed the House but now faces an uncertain future in the Senate.

It's no surprise that research confirms what most people know--children fare better in families.

This landmark child welfare legislation includes an array of services and policy changes, many of which are of critical importance to keeping children in families.

And those families are often grandfamilies (also known as families where grandparents and other relatives are raising children or kinship care).

If passed, it will be good news for the more than 2.5 million children currently being raised in grandfamilies. For the first time, this Act will allow federal child welfare dollars to be used for services to prevent children from entering foster care.

Why does this matter? Let's look at the numbers.

Of the 2.5 million children in grandfamilies, only 28%--or less than 114,000--are in foster care and part of the child welfare system. Historically, because they are not in the system, this has meant little to no support or services for the children, their caregivers or their parents.

Children shouldn't have to come into the child welfare system to receive services that strengthen a family so they can stay together under one roof and thrive.

Among other things, the Family First Prevention Services Act will help grandfamilies succeed by:

• allowing for federal reimbursement for prevention services and programs for children in imminent risk of entering foster care such as mental health and substance abuse treatment, in-home training and support services, and kinship navigator programs

Annette*, a grandmother in New York testified about how prevention services like kinship navigator programs proved critical for her grandchild and family.

For years she and her husband faced overwhelming challenges trying to get custody of their granddaughter who was neglected while living with her mother who was abusing drugs.

Then she learned about and contacted the New York State Kinship Navigator.

The program helped her find her way through systems, assisted with paperwork, referred her to a local support group, and helped her access legal advice.

She could hardly express her relief to the navigator staff, "Finally someone understands and cares. I really don't know what grandparents would do without you."

Annette's granddaughter, Brittany* has been with her grandfamily now for several years. She is now 13 years old and thriving.

Brittany loves school, and she loves her family.

All children deserve what she now has--a safe and stable family where they can grow roots and thrive.

As a country, where would we be without grandparents and other relatives who are sacrificing to raise the children in their care? The Senate needs to do the right thing and put families first.

*Names have been changed