Grizelda Grootboom recently published "Exit," a book about her violence-ridden and homeless childhood, sex trafficking, her escape from prostitution and her transformation into one of the most vocal survivor leaders in South Africa committed to ending the sex trade. She shared with me over Skype why she writes, speaks publicly about her lived ordeals and her hopes for South African women and girls, including those bought and sold in the sex trade. She lives in Cape Town with her young son. 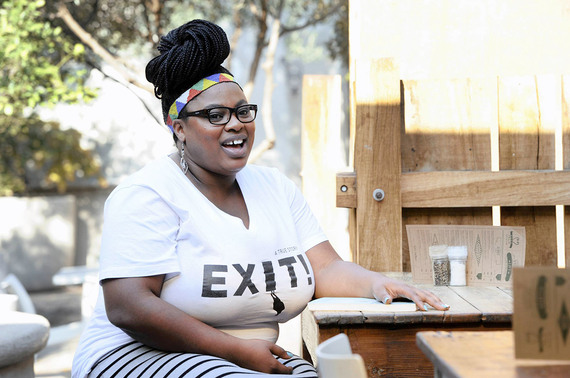 What were the first 18 years of your life's journey?

I was born in western Cape Town in the coloured area of Woodstock. My early years were happy, living with my father and grandmother. When I was 8, the apartheid government forcibly removed us from the area for development purposes, so my father and I wound up on the street. Unemployed and homeless, he became an alcoholic and eventually sent me to my mother in Khayelitsha, a township in Cape Town. The new environment was difficult since my mother had her own family and I had to learn another language. One day, I was fetching water down the road when four teen-aged boys put a knife to my throat and dragged me to a shack where they gang-raped me. It's a male cultural ritual called "ifoli," similar to jack-rolling. I was 9 years old. All I felt after that was pain and anger, so I eventually left my mother's house and spent my childhood between shelters and the streets.

Is that when you were first sold into prostitution?

No. I was just a street kid, smoking, doing drugs, stealing to eat. When we got arrested, the police demanded blow jobs, but nothing more than that. It was just something we had to do if we wanted to leave jail. On the streets, I had people in my life I considered family. When I turned 18, the shelter kicked me out permanently, so one of my friends, an older girl who would often buy drugs from us and hang out under our bridge, told me she could find me a job in Johannesburg. Once there, she brought me to a room in Yeoville, said she'd get us food and to this day, I've never seen her again. I fell asleep and was awakened with a punch in my face. The men undressed me, tied me up, injected my bottom with drugs and started selling me. For twelve days, from 10 in the morning to late in the night, men came in the room while I was blind-folded. My sense of smell and touch intensely developed; I could tell who was on his lunch break, who was drunk, who had expensive cologne. Me, for two weeks I smelled like condoms, semen and drugs. After that period, they put me on the streets. How long were you prostituted and trafficked?

Until I was 26. Those first few months, I quickly learned that if you behaved, you did the strip club rounds, swapped from one pimp to another; shipped from one province to another. If you weren't a good girl, you'd be sent to the truck drivers' stations. The government was involved; so many of my clients were lawyers and ministers. There was nowhere to go. When did you exit?

When I found out I was 6 months pregnant, I thought they'd set me free. Instead, my pimps said it wasn't part of the contract and forced me to have an abortion. Three hours after the procedure, they pushed me back on the streets to work, which I refused. They beat me so badly that I woke up in a hospital a month later. That was it. I was able to go to rehab and survived. Many say prostitution is a job like any other job. Do you agree?

A number of groups in South Africa, including S.W.E.A.T. [Sex Workers Education and Advocacy Taskforce] see it that way and advocate for laws that would decriminalize the sex trade. S.W.E.A.T. was founded by a White gay man and most of the staff is White, especially in Cape Town. I often ask them what they mean by "sex worker": the 16 year old sold on the street? The stripper who was gang-raped as a child? The privileged White woman who dabbles in escorting? In South Africa so-called "sex workers" aren't just any women - they're Black women. In prostitution, we are stripped of our dignity and often left to die. How can that be a job?

What about the claim that if you decriminalize the sex trade, prostituted women would have better access to health care and justice?

Regarding healthcare, the pro-legalization or decriminalization groups know very well we can't negotiate condoms. The clients won't pay more to wear them and the men take too long to climax with them, so if you have a quota to meet and time is expensive, condoms are out. In any case, only one in a million wears condoms, so your chances of contracting HIV/AIDS are 99%. These groups also know the antiretroviral medications are not distributed equally. All this happens regardless of any law. When it comes to justice, they're promoting a rape culture by telling these girls it's a job and a way to escape poverty. Should a young woman say 'thank you' for that?

Did any of your "buyers" ever ask you if you were trafficked or pimped?

The clients don't care about that. A few would ask me where I was from and whether I was enjoying my new job if they hadn't seen me before in that club. If I said I hated it, they'd tell me that's life and good luck to you. Besides, they'd only ask those questions once they were done. What role do you think survivors can play in raising awareness?

Survivors' voices are critically important. It's a hard balance sometimes with the frontline groups you work with. As a survivor, you desperately want and need someone to support you, but we must also be at the table and respected. We didn't escape the pain and violence to stay on the sidelines and just tell our stories. NGOs need to use us intelligently; we know the sex trade networks, the clubs, the pimps, the community, like nobody's business. They need to train us to speak out about these horrors. What about laws and policies?

When I testified before Parliament, I saw a few of my former clients at the podium. They couldn't believe that I was still alive! If the government legalizes prostitution or decriminalizes the sex trade, it will mean that women are officially property. South Africa needs to hold sex buyers and pimps accountable under the law. Not us - them. Everyone knows that the pimp is the middle guy who understands the two pillars of the trade: sex buyers and vulnerability. Pimps and brothel owners in South Africa are called "blessers" which means someone from the top, a government official, is blessing them to conduct their business. The big challenge here is our culture.

What inspired you to write your autobiography?

It is critical for me to speak out as a survivor, to use my own voice and wake my country up to the realities of the sex trade. My survivor sisters and I are often asked to talk about our experiences at events or in the media, but sometimes it feels like emotional exploitation. Reporters ask you about your life and still call you names in print that retraumatize you or they identify you as a "sex worker," which is very demeaning. What happened to me and countless others isn't "work." You speak up because you get your dignity and self-worth back a little, but when that doesn't happen, it hurts deeply. I wrote "Exit" because the more survivors testify, the more governments will take us seriously. If you want to change the law, you need the woman who has outlived the hell that is prostitution. I am a survivor for a painful purpose, but I have to help stop the next generation of girls from being bought and sold. My responsibility is to tell the truth.