Imagine withstanding torture so severe, your only recourse is to douse your own body in gasoline and light a match. Sixteen-year-old Yasmin lived this nightmare. 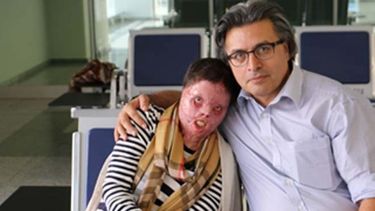 Yasmin, who set herself on fire to avoid a brutal attack by ISIS, is shown with Dr. Jan Kizihan. (Courtesy: Jan Kizihan). Fox news.com

As one of over 2,000 girls currently held as sex slaves for Islamic State (ISIS) militants, Yasmin knew that if she survived scorching her body, her "captors might no longer find her attractive." She was right. Her appearance today was the cost of freedom from the continued rape and sexual torture she endured at the hands of ISIS.

World leaders have officially declared Yazidis and Christians are being systematically wiped out in Iraq and Syria. So why did Yasmin have no recourse for escape from ISIS besides self-mutilation? The UN Human Rights Commission released a report adding the crime of genocide to the list of ISIS atrocities carried out since 2014 (including crimes against humanity and war crimes).

According to the Genocide Convention and the UN "Responsibility to Protect," leaders are required to protect the victims of genocide first and to prevent, at whatever cost, the continued genocidal campaign.

What is the purpose of designating as genocide the atrocities against Yazidi and Christian populations in Iraq and Syria if we continue to refuse to do nothing and purposely deny our legal obligations?

Christian Solidarity Worldwide (CSW) noted that "Christian refugees don't go into UNHCR-run camps for a number of reasons [among them] concern about the intimidation they face because of their different lifestyle...dress code and the strict Muslim environment dominating camps."

Minorities like Yazidis and Christians need their own safe refugee camps. They need their own security force to "protect" and help "prevent" the ongoing genocide. The UN is able and legally obligated to provide both. Additionally, of the 10,800 Syrian refugees admitted to the United States, only 56 are Christian. Of the July refugee arrivals, 1,501 (99%) were Sunnis, and 3 (0.19%) were Christian. The UN Refugee Resettlement Agency that vets the refugees for resettlement to the US begins its very lengthy vetting process within these UN camps, so it is no wonder that less than 1% of the actual targets of genocide are being admitted to the United States.

Though there are 700,000 displaced people currently living in the Kurdistan region of Northern Iraq, 10,000 to 15,000 Yazidi Iraqis chose to flee to war torn Syria. They escaped the genocide to find "refuge" in a country ravaged by civil war and ISIS in order to stay in the Newroz Camp run by local NGOs, not the UN.

The vast resource of the Hague and international attorneys need be utilized to bring ISIS leaders to justice. ISIS is guilty of genocide: a crime under the Rome Statute of the International Criminal Court (ICC) and all 193 Members of the United Nations. ISIS leaders and operatives should stand trial before worldwide courts for the vast array of international criminal offenses they have perpetrated including Crimes Against Humanity, War Crimes, and the Crime of Genocide. "Killing them was like killing a chicken."

In a prime example of someone that must be charged in the Hague for international crimes, ISIS militant Abu Chiad discussed openly with no remorse, how he made daily trips to behead people and rape Yazidi women, saying "Killing them was like killing a chicken."

This ideology has been documented at length in former eliminationist and genocidal campaigns according to the book "Worse Than War" by Daniel Goldhagen. Chiad, himself, admitted ISIS tactics mirrored the Nazi justification of Jewish annihilation during the Holocaust. 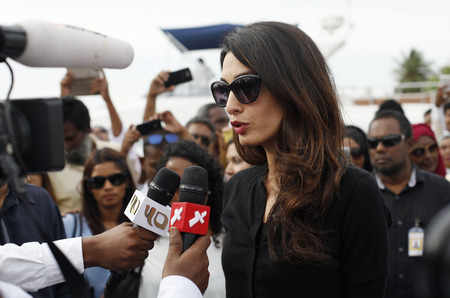 Amal Clooney is slated to become the first attorney to bring the Islamic State to justice in the international courtroom. (Photo: Flickr/Dying Regime) I applaud Amal Clooney for being the first Human Rights Attorney to take up arms in the legal arenas in defense of the Yazidis to sue members of ISIS for their genocidal atrocities, but Ms. Clooney cannot take down ISIS alone.

We must continue the fight and pave this untrodden road to give strength to the victims by setting legal precedent that ideologies possessed by ISIS and its progenies are, in fact, criminal ideologies and no discussion on religion can impugn those who don't speak out against them.